Elusive Snailfish found during the expedition to the Atacama Trench

Three bizarre fish that live nearly five miles below the surface of the ocean have been discovered by British scientists.

The new species of ghostly ‘snailfish’ were captured on film feeding and interacting in their pitch black secret world – almost 25,000 feet down in the south Pacific.

With a transluscent tad-pole like body large heads, small eyes and no scales they are the world’s deepest living fish – and the top predator in this mysteriius environment.

They exist at depths nearly as far down as Mount Everest is high – where the water pressure is equivalent to an elephant standing on your thumb.

Dr Thomas Linley, of Newcastle University, said: “There is something about the snailfish that allows them to adapt to living very deep.

“Beyond the reach of other fish they are free of competitors and predators. 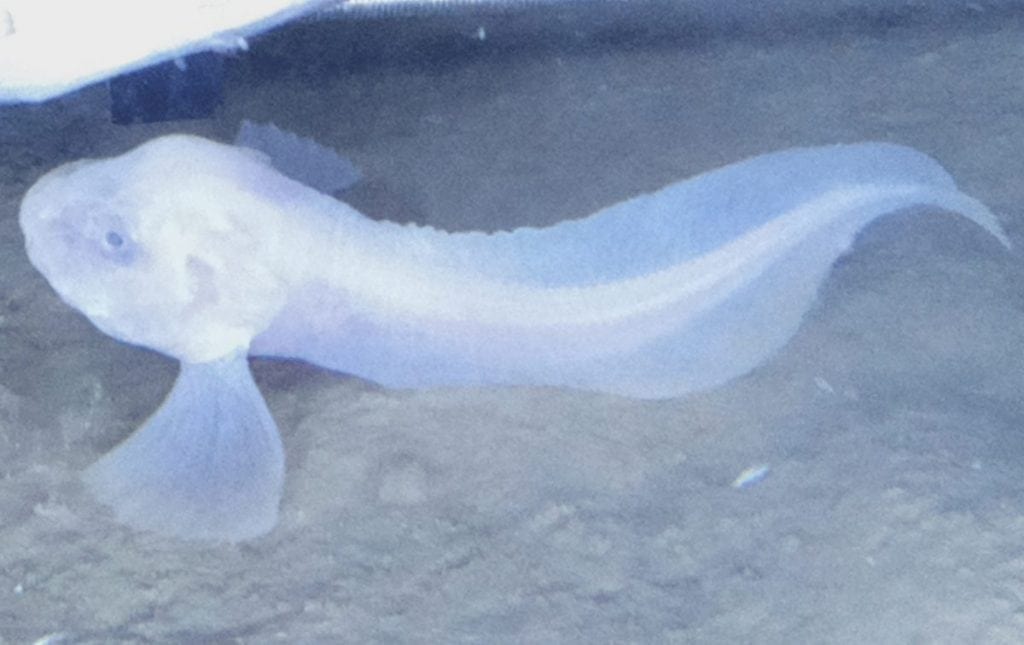 “As the footage clearly shows, there are lots of invertebrate prey down there and the snailfish are the top predator. They seem to be quite active and look very well-fed.

“Their gelatinous structure means they are perfectly adapted to living at extreme pressure and in fact the hardest structures in their bodies are the bones in their inner ear which give them balance and their teeth.

“Without the extreme pressure and cold to support their bodies they are extremely fragile and melt rapidly when brought to the surface.”

He and colleague Dr Alan Jamieson led a team of 40 researchers from 17 nations in an expedition to the Atacama Trench in the Pacific.

About 100 miles off the coasts of Peru and Chile, it’s one of the deepest places on Earth.

The new fish have been named ‘the pink, the blue and the purple Atacama Snailfish’.
They do not conform to the stereotypical image of a deep sea creature.

But although they lack giant teeth and a menacing frame they are highly adept at living where few other organisms can.

They were equipped with HD cameras and traps – that amazingly caught one of the snailfish as it followed its crustacean prey in.

The Atacama Trench is about 3,700 miles long and more than five miles deep – running right along the west coast of South America.

The lander is dropped overboard and free-falls to the ocean floor where it carries out a variety of monitoring and sampling tasks.

It can take four hours for a trap to sink to the bottom. After waiting an additional 12 to 24 hours the researchers send an acoustic signal.

This releases weights and the lander rises to the surface with the help of flotation – enabling the team to catch specimens and take video footage of life at the bottom of the ocean.

On this latest expedition more than 100 hours of video and 11,468 photographs were taken at the seabed.

As well as the snailfish, the team also filmed some astonishingly rare footage of long-legged isopods, known as Munnopsids, which are about the size of an adult hand.

These crustaceans have small bodies, extraordinarily long legs and swim backwards and upsides down.

They propel themselves with paddles on their their ‘tummies’ – before righting themselves on the seafloor and spreading their long walking legs out like a spider.

Dr Linley said: “We don’t know what species of munnopsid these are but it’s incredible to have caught them in action in their natural habitat – especially the flip they do as they switch from swimming to walking mode.”

The snailfish will be featured as part of the Challenger Conference 2018 which kicks off at Newcastle University from today and runs until Friday.