From the werewolf of Southend to the asylum seekers who "tried to cook a pair of royal swans", these are the stories The Sun want you to forget.

by Jim Felton
in Media, News 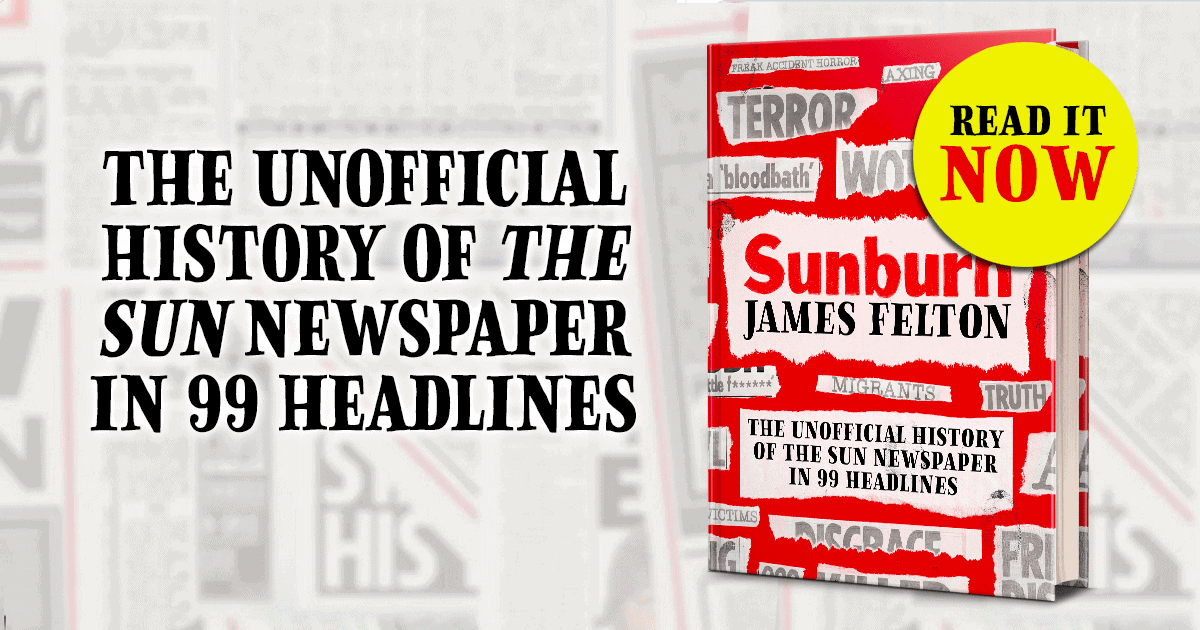 In 1969, Rupert Murdoch bought The Sun – a nominally left wing broadsheet – and turned it into the number one bestseller that would also carry the nickname “The Scum”.

Throughout the years, The Sun has claimed to win elections and appeared to have influence over politicians and politics well beyond what their boob magazine might merit. Editors of The Sun have been seen going in and out of Downing Street in a way you just don’t see with the people who run Jugs. And these are people who you really don’t want anywhere near power.

If you haven’t read it – and I truly envy you – they specialized in celebrity, sleaze, scandal, with a healthy dollop of homophobia, racism and misogyny.

I’ll admit, when I took on the project of reading through The Sun’s catalogue from 1969 until the present day, I wasn’t expecting great things. As well as knowing the content was going to be awful, I had to sit in a library whilst professors walked around talking about Plato and try to hide my screen which was quite often covered in tits. But I hadn’t realised quite how awful it would be, especially reading through the output during the 1980s.There’s only so many headlines along the line of ‘I’D SHOOT MY SON IF HE HAD AIDS, SAYS VICAR’ (14 October 1985), ‘FLY AWAY GAYS AND WE WILL PAY’ (6 May 1987) and ‘WOULD YOU LET THIS MAN NEAR YOUR DAUGHTER’ (27 April 1987) about poet and writer Benjamin Zephaniah which, as Zephaniah puts it in his autobiography, made him sound ‘like I was some kind of rapist’ even though it was just about him taking up a teaching position, before you start to sink into Sun-induced despair.

In this book I wanted to a) answer the question ‘does media influence society, or the other way around’ before giving a copout answer that it’s both, b) document the worst things The Sun has done over time, like a time capsule but when you open it somebody has taken a shit in there, and c) I wanted it to be funny, because the first two sounded far too serious to actually sell.

Throughout the book I tackle some horrible subjects as well as the absolute nonsense that you’d expect to find in a right wing tabloid, including their most notable moments of awfulness, that punctuate through the background levels of just being shits. But for these excerpts I wanted to give you a flavour of a few stories that are typical of The Sun, and also sort of demonstrate weird insidious undercurrents that go throughout their reporting, making it the amoral sales-chasing paper loved by shits everywhere today.

I’ll give this to The Sun, they know how to sell a newspaper. I see the title ‘WEREWOLF SEIZED IN SOUTHEND’ I’m coughing up 20p to find out what the fuck they’re talking about. Either werewolves are real or somebody’s haired up a man, and I need to know which.

‘A CRAZED ‘werewolf’,’ the story started, already implying with quotation marks that this isn’t the confirmation of werewolves I readers were hoping for, ‘with amazing strength was seized yesterday after fighting a four-hour battle with eight terrified police’.

By paragraph six the quotation marks were dropped and they were just calling him ‘the wolfman’. Just oh yeah he’s ‘the wolfman’ like that’s a pre-established thing. The story told how officers ‘were thrown across the yard by the power-packed wolfman’ and quoted police officers who said ‘the man was snarling, his lips were turned back and his hands turned into claws’.

This is one of those stories that the more you hear about it, the more awful it turns out to be. Like when you see a viral video of a dolphin doing what looks strikingly like the Macarena and then a few days later a dolphin biologist explains to the media that that’s just the twitches dolphins make during the final stages of dolphin cancer.

The man (spoilers, but this wasn’t actually proof that Twilight or any of the other less shit werewolf films were real) had been driven to the police station by a woman who worked as a prostitute, after he had started acting strangely. After a fight with the police, they had gotten him into a cell, which The Sun had called a ‘cage’ to make it sound more wolfy.

In the cell, he managed to smash his head through a door hatch, following which he was sedated by a doctor. Sedated and with his head still stuck in the door, firefighters showed up and ‘covered him in washing up liquid and managed to squeeze him out’.

The Sun helpfully explained – in between regularly calling him the wolfman – that the man was not a wolf, and was possibly suffering from ‘lycanthropy’, which is the (incredibly rare) delusion that you can turn into a wolf. It’s often associated with schizophrenia, psychotic depression and bipolar disorder. The Sun stated that victims ‘can develop incredible strength because their mind overrules the limitations of their body’ which is only slightly less accurate than when they were calling him the wolfman: it does not imbue the sufferer with the strength and fighting prowess of a wolf, instead imbuing them with the regular powers of a regular unwell person urgently in need of treatment.

The Sun, ever the mental health campaigners and bastions of sensitive coverage, printed a fun ‘IS YOUR NEIGHBOUR A WEREWOLF?’ guide on page 9, before interviewing the man in hospital about his condition a week later. In the interview, from 31 August 1987, they refer to him as ‘the Southend werewolf’, pictured him baring his teeth, and got him to ‘admit’ that he looks a bit like a werewolf. Which I imagine is great for the old self-esteem and healing process when you’re just coming around from a delusional episode.

In a piece that seems like The Sun were hoping to do a pun so good that it justifies the racism (or racism so good it justifies the pun, depending on your opinions on racism and puns), the paper ran a story that asylum seekers were stealing swans and killing them for barbecues under the headline ‘SWAN BAKE’.

The story alleged that ‘callous asylum seekers are barbecuing the Queen’s swans’ – just to imply a bit of treason in case you weren’t already mad at people murdering some swans and then chowing down the evidence* – and that ‘East European poachers lure the protected Royal birds into baited traps, an official Metropolitan Police report says.’

The allegations – which get quite specific – were page one news.

‘Police swooped on a gang of East Europeans and caught them red-handed about to cook a pair of royal swans,’ the story read. ‘The asylum seekers were barbecuing a duck in a park in Beckton, East London. But two dead swans were also found concealed in bags and ready to be roasted. The discovery last weekend confirmed fears that immigrants are regularly scoffing the Queen’s birds.’

It all sounds a bit suspect, doesn’t it? Swans will notoriously follow you down the road against your will if you look a tad nervous, why would anyone feel the need to set up an elaborate swan trap? And why would East Europeans be doing this, when in East Europe their favourite cuisines are – famously – NOT SWAN.

There must be some evidence to it, right? Because – and I’m being extremely fair to it here – claiming that a specific nationality of immigrants are luring swans to their death (like a pied piper whose pipe makes pleasing swan honks) and then whacking them on a barbecue without any solid evidence of investigations or arrests is completely batshit. Right?

Nick, irritated at the barbarism the piece implied, took the unheard of step of checking whether or not the story was actually true. He rang the police, who informed him there had been no arrests, charges or even cautions for swan killing or indeed roasting. In fact, after searching some more, there was no evidence other than conjecture that any swans were even missing.

After being approached by Medic, The Sun printed a small clarification, making clear that there had been no arrests or charges in relation to ‘offences against swans’ and that ‘The Sun […] referred to asylum seekers being responsible. We have no information at all that supports this contention and indeed when we spoke to [the journalist who wrote up the Swan Bake piece], he agreed that this was a mistake.’ As they’d printed ‘Swan Bake’ on the front page, they ran this correction also on the front page on page 41 – for an audience for whom I would argue getting past page 3 is a bit of a struggle.

The Leveson inquiry included Swan Bake as evidence newspapers ‘wilfully’ produce stories ‘which are factually incorrect’ in order to ‘fit with a newspaper’s adopted viewpoint’. ‘Unidentified people were cited as witnesses to the phenomenon, but it seemed there was no basis to the story: The Sun was unable to defend the article against a PCC complaint,’ they noted.

In essence, imaginary swans had gone missing and some very real asylum seekers took the blame. But to be fair to The Sun, ‘swans we aren’t sure existed in the first place may have died (you don’t know!) and one local and potentially racist person we are unwilling to name reckons it’s actually the immigrants based on nothing’ is a lot more difficult to work into a pun.

*A law change in 1998 it’s no longer technically treasonous to eat the Queen’s swans, but it remains illegal to kill or consume them, but fuck you reader I’m leaving in the treason joke. The swans still remain property of the Queen by default, and by Christ that makes eating them treason in my eyes.

Sunburn: The unofficial history of the Sun newspaper in 99 headlines is available from Amazon, priced £10.48

Related: Marr clip shows how funding is really handed out in parliament