“That is the twisted ideology of Nazis and white supremacy. He came to believe an ideology which thinks a race war is coming." 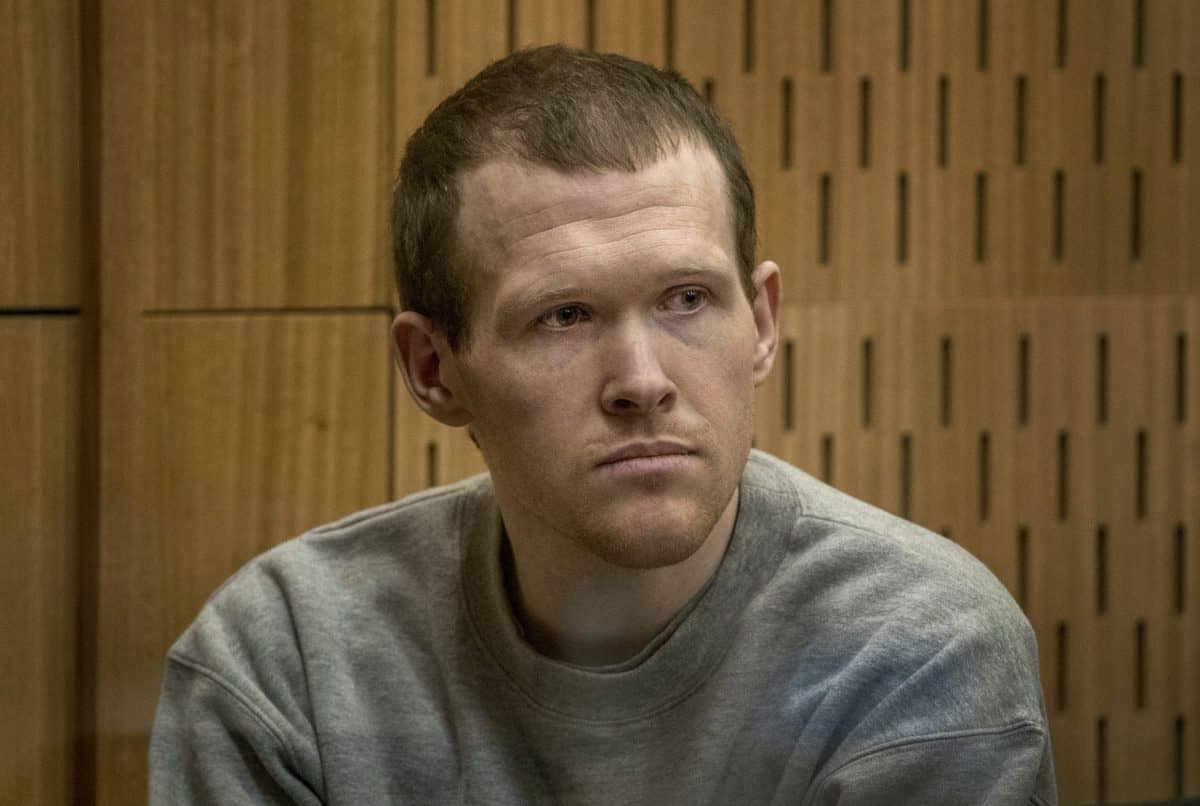 Australian Brenton Harrison Tarrant, 29, sits in the dock at the Christchurch High Court for sentencing after pleading guilty to 51 counts of murder, 40 counts of attempted murder and one count of terrorism in Christchurch (John Kirk-Anderson/Pool Photo via AP)

A teenage boy downloaded guides on how to make guns and joined Neo-Nazi chat rooms where he praised the Christchurch mosque killer as “a saint”, a court heard.

The 17-year-old youth, from Rugby, Warks., is accused of a string of right wing terrorism offences between April 23 and September 3 last year.

A court heard how the teen became radicalised online to the point where he believed in the “twisted ideology of Nazis and white supremacy.”

He downloaded information on how to make homemade firearms and shared them with other fascists in preparation of an “impending race war,” jurors were told.

The lad is also accused of heralding murderer Brendon Tarrant – who shot dead 51 Muslims in the New Zealand mosque massacre – as a saint.

The boy, who cannot be named because of his age, denies preparing acts of terrorism and having instructions on how to make homemade guns.

He is charged with one count of preparing terrorism acts and six of possessing documents of the kind likely to be useful to a person committing or preparing an act of terrorism.

The defendant, wearing a shirt and tie, was allowed to sit at the back of the court room instead of the dock as the case was opened at Birmingham Crown Court today (Tue).

Prosecutor Mathew Brook told the jury: “When you all walked into court, and looked at the defendant, you may well have thought to yourself ‘I wonder what he is on trial for?’

“You then heard the court clerk read out the charge which the defendant faces. You will have realised this trial relates to terrorism.

“That may have surprised you because most of us, perhaps unconsciously, think in stereotypes, and he I suspect does not look like how you expected a terrorist to look.

“In all trials, the jury is asked to put stereotypes to one side, and to decide the case on the evidence they hear. This case is no different.

“In this case, the evidence will prove that he became radicalised so he fully believed in extreme right wing ideology.

“That is the twisted ideology of Nazis and white supremacy. He came to believe an ideology which thinks a race war is coming.

“An ideology which believes its followers should bring about a race war – should accelerate its start – so that the white race can become supreme.

“He came to believe in an ideology which praises terrorists who carry out mass shootings, like the Christchurch shootings in New Zealand, and called the perpetrators of such terrorist massacres ‘saints’

“The evidence will show that he joined extreme right wing chat forums on the internet and joined in the conversations about guns and mass shootings.

“The evidence will show that he searched the internet for information on firearms, ammunition and weapons.

“Having found that information, he did not keep it to himself but shared information about how to make homemade guns to people he believed shared the same extreme right wing ideology and views of an impending race war as him.

“The evidence will show that he searched for information about where to buy a blank firing gun – which he discussed converting to a real live firing gun with others.

“The prosecution accepts that before April 2019, the defendant had an interest in firearms. He would not be the only teenage boy in the world to have such an interest.

“However, as we shall see that interest in guns made in factories for armies etc, changes over time to become an interest that includes homemade firearms.

“And that interest in homemade guns becomes sinister when combined with his beliefs and his beliefs in what guns should be used for.”

The jury was shown images found on the defendant’s laptop which featured captions such as “Read a book n*****”.

The words “How to spot a criminal” accompanied an image of a black man.

Another image on the defendant’s laptop read “F*** off kike”, a derogatory term for Jewish people.

Mr Brook added: “The extreme right wing have a hatred of Jewish people, who they view as a type of parasite running the world for their own benefit.

“You will see an image of a skull saying ‘Read Siege’.

“‘Siege’ is a book which was written by an American Neo-Nazi called James Mason.

“It is a core text, the ‘bible’ if you like of some extreme right wing groups.

“It is a book which glorifies violence and is designed to inspire Neo-Nazis to take direct action.

“An image from American Fox News which has been altered – the presenter has a black skull mask on – ‘Day of the rope’ and ‘just kill them, make America great again’

“We will see as we look at some of the other material found on his electronic devices, that the Day of the Rope is the name given by people who hold extreme right wing views to the first day of the race war which they want to happen – the day when their enemies will be hung.

“In fact, it is a phrase originating from a novel called The Turner Diaries – a PDF of which was found on his phone, and which he said he really enjoyed reading.

“The ‘day of the rope’ in the novel was an event in which tens of thousands of ‘race traitors’ are dragged from their houses and hanged from lampposts, power poles and trees.”

The court also heard how a copy of The Great Replacement, written by Brendon Tarrant before the mosque shootings, was created on his phone on May 15 last year.

Mr Brook read out passages from the text which has chapters on “Radialization of Western Men” and “Destabilization and accelerationism”.

He said: “Accelerationism is part of the Siege mentality – that you do not wait for the race war, you take part in violent acts to accelerate it.

“When Brendon Tarrant carried out his terrorist attack, he had a camera with him which was recording what was happening and streaming it onto the internet.

“A copy of that recording was found on the defendant’s phone.

“The recording which was on the defendant’s phone was not censored and showed the killings in graphic detail.”

The court was played censored versions of footage, one of which had been set to music and edited to resemble a video game.

He told the court the boy also joined far-right Telegram chats such as International National Socialists and Iron Dawn.

Reading out a private message to a fellow group member, Mr Brook said: “The defendant comments that he was going to function as an independent cell for recruitment purposes.

“The defendant states: ‘We’re going to be taking action.

“‘We need to be more IRL focused – in real life focused.’

“The defendant mentioned that he was also an admin for the group League of Nationalists, but it was probably not going anywhere.

“He went on to say that whatever happened, he was going to have a local unit and he was working on the propaganda and the weapons, he just needed men.

“On July 14, the conversation in the Iron Dawn chatroom turned to reading ‘Siege’, with the defendant commenting ‘it’s pretty good’ and ‘it’s sort of what radicalised me.

When a member of the Iron Dawn chatroom asked, “so what about weapons stuff?”, Mr Brook said the defendant replied: “I’m that ni**a. For the UK guys anyway.

“In the next few weeks I’ll have a functional handgun.”