It was emitted by a gamma ray burst - a brief but powerful cosmic blast seven billion light-years away. 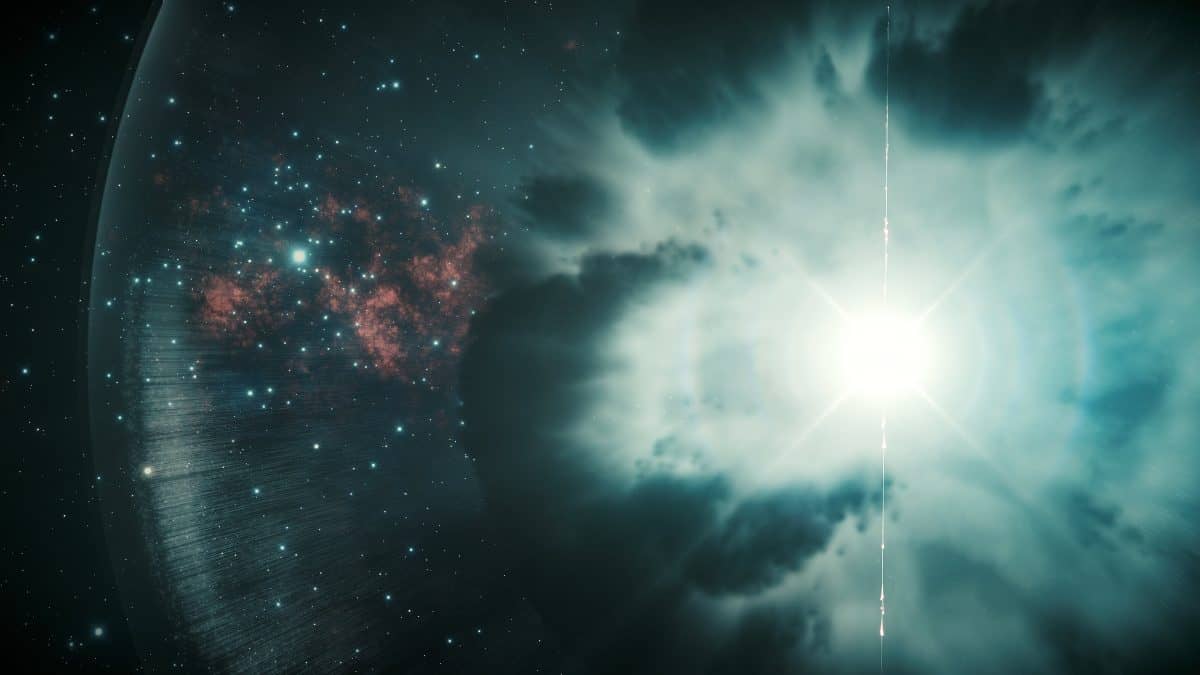 A violent explosion in a distant galaxy has broken the record for the brightest light ever seen.

It was emitted by a gamma ray burst – a brief but powerful cosmic blast seven billion light-years away.

The discovery reported in Nature involved more than 300 scientists from around the world.

Co author Dr Gemma Anderson said gamma-ray bursts are the most energetic events in the universe – the most massive since the Big Bang.

They happen so far away they can only be detected when the beams are pointed directly at Earth.

They can last from a few milliseconds to a few hours – ejecting particles at nearly the speed of light.

Dr Anderson, of Curtin University, said: “They are likely produced by a massive star being blown apart in a supernova, with the resulting explosion leaving behind a black hole.

“A typical burst releases as much energy in a few seconds as the Sun will in its entire 10-billion-year lifetime.”

Dr Anderson said gamma ray bursts appear in the sky without warning, about once per day.

She said: “The bursts themselves usually only last a few seconds. But they have an afterglow that can be observed by telescopes like MAGIC for several minutes, and by radio telescopes for months or even years.”

It was named GRB 190114C and, within 22 seconds, its coordinates were sent to astronomers across the globe.

Among them were the operators of the twin Major Atmospheric Gamma Imaging Cherenkov (MAGIC) telescopes in the Canary Islands.

He said: “The telescopes were able to observe the burst within 50 seconds of it appearing in the sky.”

In the first seconds after they started observing, the two MAGIC telescopes in La Palma, Spain, detected particles of light — or photons — from the afterglow that clocked in at between 0.2 and 1 teraelectron volts (TeV).

That’s equivalent to the amount of energy released by proton collisions in the Large Hadron Collider, the most powerful particle accelerator on Earth.

It is the first time such high-energy radiation has been detected from a gamma ray burst. The GRB phenomenon was only identified 46 years ago.

The gamma ray burst was followed up by telescopes around the world, to pinpoint where the burst had originated from and its physical attributes.

That included observations of radio waves by Dr Anderson and collaborators in Australia and around the world, using the Australia Telescope Compact Array (ATCA).

Dr Anderson said the high-energy light was likely caused by the blast wave of material from the gamma ray burst hitting the surrounding environment.

She said: “The photons probably weren’t generated in the explosion itself.”

It could shed light on the physical processes that lead to such bright explosions and the creation of black holes where gravity is so strong not even light can escape.

Co-author Dr Paul Kuin, of UCL, said: “Since launching in 2004, Swift has greatly increased our understanding of gamma-ray bursts which occur almost daily in the sky and are characterised by brief, but intense, flashes followed by an afterglow which fades over time.

“We’ve now seen extremely high-energy light is released in the afterglow period – something that was only predicted before in models – and comparative studies suggest this is not an unusual feature.”

More than twenty observatories tracked GRB 190114C to map the range of light it emitted.

Professor Mat Page, who leads the UCL team responsible for the Ultraviolet and Optical Telescope on Swift, said: “Our space telescope works at wavelengths a million times longer than the MAGIC telescopes.

“Working together we cover a huge range of the electromagnetic spectrum to advance our understanding of these spectacular explosions.”

The new results provide the first unequivocal evidence for a distinct emission process in the afterglow.

It is hoped many more GRBs will be detected at very high energies in the future to reveal more information about these powerful cosmic explosions.

Dr Elizabeth Hays, the Fermi project scientist at NASA’s Goddard Space Flight Center in Greenbelt, Maryland, said: “Much of what we’ve learned about GRBs over the past couple of decades has come from observing their afterglows at lower energies.

“Now, thanks to these new ground-based detections, we’re seeing the gamma rays from gamma-ray bursts in a whole new way.”