by Chris Hobbs
in News 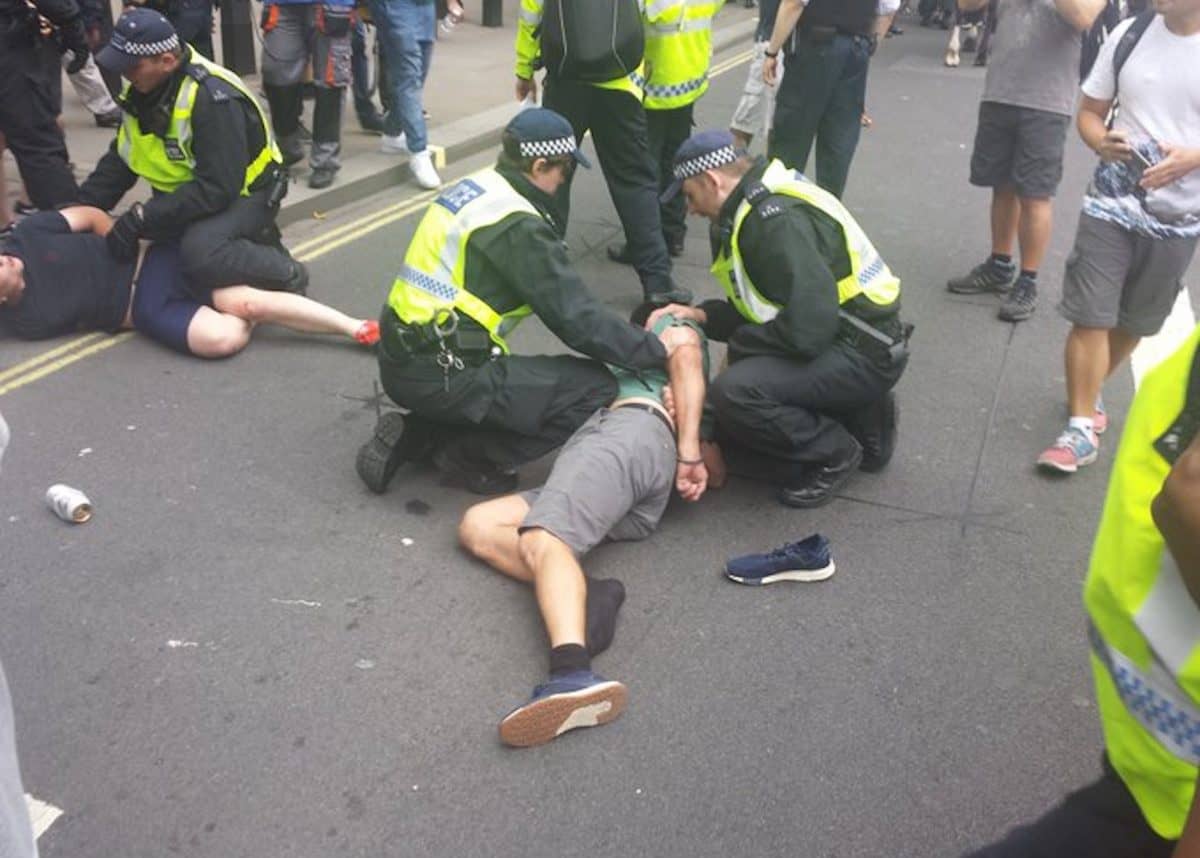 It should have been an auspicious day for both those on the right and left of the political spectrum on what was a Saturday ‘devoted’ to a ‘political prisoner’ namely Tommy Robinson. (Actually real name Stephen Yaxley-Lennon.)

Those close to the currently incarcerated Robinson would have been hoping for a rally that drew a bumper turnout for someone they regard as a cross between national hero and a messiah. My own estimate, despite the Robinson camp videos which suggested otherwise, was a gathering of about 3,000 – well down on the protest in June last year when this issue began.

Meanwhile, those on the left could have be forgiven for expecting a turnout thousands of anti-racists, including prominent politicians, from across the country eager to demonstrate their feelings for an individual they regard as the devil incarnate.

If this was the case, both camps must have been disappointed. Having said that it was still to prove a busy day for the public order trained officers of the Met.

The anti-Robinson protest decided to ignore S14(3) of the public order act, and meet at Piccadilly Circus well away from the designated area assigned for their rally. Surrounding Eros were around 200 mostly young people attempting to look sinister by being dressed mainly in black with masks to match. Across the road, were a much less menacing crowd of around 100, consisting mainly of trade unionists, who were holding their own meeting.

Suddenly, the masked group made a move up Regent Street towards Oxford Circus and were joined by the trade unionists. Their progress up Regent Street was painfully slow, however this was of their own volition rather than that of police. Their unofficial, illegal rendezvous point gave a problem for the Met in that they would have to be guided past the Robinson designated meeting area in Langham Place to get to their own in Portland Place.

The back- street hunters.

As they approached the junction with Oxford Circus, a loose cordon of police stretched across the road. Suddenly, about 100 Robinson supporters appeared intent clearly on ambushing the anti-racists. On seeing the police cordon they tried to slip down a side road into Argyle Street. Territorial Support Group (TSG) officers in the cordon spotted the movement and without waiting for instructions, sprinted after the group, overtook them and set up another cordon forcing them back.

This however, was to become the pattern of the afternoon. Much of the police operation centred on protecting the anti-racist column from Robinson supporters who were roaming around the back streets looking to attack their rivals. Police were somehow always successful in blocking off access.

Police now decided to take anti-racists on the circuitous route to get them to their Portland Place designated meeting area.

The recently published Robinson group video alleges that police were deliberately escorting the anti-racist protestors in order to facilitate an attack on their own supporters. The simple fact is any physical confrontation would be over in minutes; the young anti-racists would be no match for the Robinson supporters, many of whom are veterans of football related ‘activities’ over decades.

The Robinson video appears to show anti-racists attempting to break through their police escort to attack their rivals in Cavendish Square. If police were facilitating the anti-racists then surely, they would have allowed them ‘access.’ Such a suggestion is both ludicrous and laughable.

The situation became more challenging when another group of about 100 Robinson supporters, left the rally and began walking down Regent Street towards Oxford Circus. They took over half the road and chanting, crossed Oxford Circus before turning back and returning towards their rally.

Throwing bottles and chairs at the police

At the corner where the All Bar One pub is situated, they attempted to turn left thus taking them into territory where the anti-racists were being escorted. Outside All Bar One, a large number of Robinson supporters, eschewing the rally, were drinking.

Police officers jumped out of carriers and blocked the Robinson supporters who attempted to elude the hasty police cordon. Police pushed them back which promptly saw a reaction in terms of bottles, glasses and even chairs being thrown at officers. Officers drew batons and forced the crowd back as reinforcements arrived.

Eventually most of the Robinson supporters moved back towards the rally while I managed to catch up with the anti-racists who were now being delivered to their designated meeting place north of the Robinson rally. Both sides could glimpse each other but were well separated by barriers and officers.

Police saw off another attempted attack on their rivals by a group of Robinson supporters who then went on a ‘walkabout, followed by two Oracle (Intelligence) officers. Rather by accident than design they walked down a small back alley and found themselves in front of the BBC, behind police barriers that were to be found at the front of the concourse.

When the penny dropped, chants of ‘paedophiles’ were directed against the building, the main doors of which were locked. A gentleman in a suit was assumed to be a journalist and couldn’t gain entry. As he walked around the side of the building escorted by two BBC security officers, he was subjected to some horrendous abuse but wasn’t actually assaulted.

The Oracle officers had been frantically on their radios and eventually TSG officers arrived and robustly pushed the Robinson supporters back behind the barriers to re-join the rally. Those officers were predictably subjected to abuse and chants of ‘paedophile protectors’ and indeed that chant was a feature of the afternoon.

Eventually, the rally closure time of three o’ clock loomed. The police operation had been a success thus far. How would the dispersal go?  The answer was to be not without incident.

As the meeting drew to a close, hundreds of chanting, singing Robinson supporters took over Regent Street and began walking towards Piccadilly Circus and from there to Trafalgar Square. A huge part of central London had been given over to thousands of cyclists participating in the Prudential Ride London event which was why the Robinson rally and counter protest had been moved from their usual segregated areas in Whitehall.

The bemused cyclists were held up as Robinson supporters streamed across roads into Whitehall. I saw one male with three children, none older than 10, repeatedly shout at cyclists that Muslims were raping their children. Mounted officers arrived to restore some sort of order which enabled the cyclists to progress.

The crowd reached Downing Street and outside the gate a handful of officers including those from the Oracle unit, confronted what had now become a mob, with batons drawn. TSG officers however came running down Whitehall followed by mounted officers and amidst ugly scenes, the Robinson supporters were pushed away from the gates.

Cyclists meanwhile were trickling past Downing Street viewing that which was not supposed to be part of their memorable day out.

Opposite Downing Street there happened to be a small anti-Sudanese government protest going on which involved singing and speeches. Standing on a wall to one side of them, a white teenage girl could be seen shouting ‘F*ck tommy Robinson.’ She repeated it several times and was noticed by several harridans amongst the Robinson contingent who responded in kind.

After a couple of minutes, the males in the crowd became aware of the girl’s defiance and also began hurling threatening abuse back at her.

As the exchanges continued, the mob began inching towards the girl like a pack of hyenas. As the jeering mob came within a few yards the girl had little choice but the flee down a small alley. I feared for her safety and moved towards the alley as Robinson supporters began to follow but fortunately the Oracle officers, with their instinct for right time, right place, arrived.

Another penny then appeared to drop that not only was there a small, unrelated protest going on but that Sudanese were Muslim. And so it began; a torrent of foul mouthed racist abuse together with chants of ‘Allah is a paedo.’

Amazingly the Sudanese continued to smile and sing in a quite remarkable display of dignity. More TSG officers arrived and pushed the jeering, hostile crowd back. The girl who had shouted ‘F*ck Tommy Robinson’ returned and was embraced by some of the group.

As the Robinson crowd were pushed back down Whitehall, there was another skirmish and three arrests took place with those arrested being pinned to the ground. In all during the course of the day, 24 arrests were made.

Down by Westminster Station I heard some Robinson supporters saying that it was all, ‘going off’ at the London Eye. At this point, three Met carriers went flying across Westminster Bridge on ‘blues and two’s.’

What I saw was a tolerant, restrained, measured and successful policing operation despite the challenges which involved other attacks on police officers. These were not seen by me but shown on social media and included a police medic being dragged into a hostile Robinson crowd or should I use the term by which they describe themselves: