Home Secretary Priti Patel approved the use of the Taser 7, hailing it as a “safe and effective tool for apprehending criminals.” 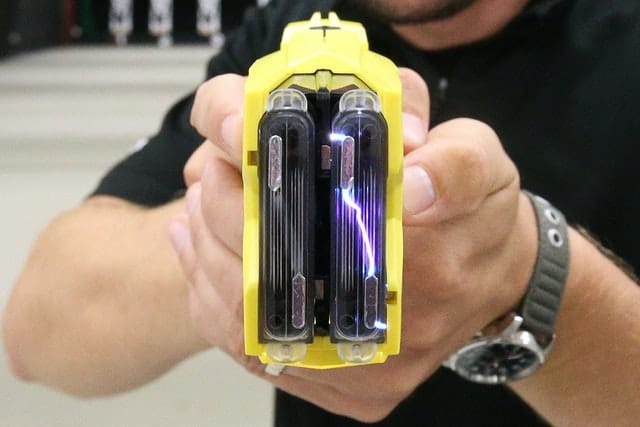 Police could be issued with new Tasers despite tests raising concerns that bystanders may be inadvertently hit when they are discharged amid questions over their accuracy.

Home Secretary Priti Patel approved the use of the Taser 7, hailing it as a “safe and effective tool for apprehending criminals” even though Government scientists highlighted potential problems with its performance during trials.

The Home Office said it is “more effective than its predecessors”, is “more accurate, faster and compact than previous models” and has “undergone full safety and technical assessments”.

But trials warned the stun guns could cause more pain and put people at a higher risk of being injured.

The tests also found the latest version of the weapon had higher “miss rates” than the existing X2 and X26 models used by officers in England and Wales.

The news comes after the police watchdog called for greater scrutiny of the use of Tasers by officers.

The Independent Office for Police Conduct warned in May of growing concerns of the “disproportionate” use of the weapon against black people and those with mental health problems as it launched a probe into several incidents.

Meanwhile, the Home Office has started looking for alternatives to Taser so police can stop armed and violent offenders with “minimal necessary force” from a distance.

Known as Conductive Energy Devices (CED) because they hit a suspect with a high-voltage electric shock, Tasers were used in 23,000 incidents in the year to March 2019 and were discharged 2,700 times – the highest number on record.

The Taser 7 allows officers to quickly fire a second shot if the first fails and has an added green laser beam which is to help the user see better in daytime.

Forces can now buy the new model as well as continue to use existing versions.

But according to a report from the Scientific Advisory Committee on the Medical Implications of Less-Lethal Weapons (SACMILL), shocks fired from a Taser 7 “may be more painful for the subject”.

It warned of a rise in the number of incidents of darts “penetrating the body to their full depth” as well as injuries to “deeper-lying organs and tissues”.

There were also concerns about a possible rise in skull injuries and “vulnerable areas” of the head and neck being struck as barbs “may have a tendency to stray further from the point of aim”.

The “hazard presented from free-flying probes” could pose a “new injury risk” to passers-by, the report also said, adding that officers are expected to be trained to have a “heightened awareness of the area behind the subject”.

One of the trials, carried out by the Defence Science and Technology Laboratory (DSTL) at Porton Down, was “particularly noteworthy” because it found a “miss rate” of 57.6% as opposed to 2.8% and 8.3% respectively for the existing X2 and X26 models.

In a separate document, DSTL said its tests found a “consistently higher miss rate” for the new model.

SACMILL advised performance of the devices should be monitored for a year.

The Police Federation of England and Wales, which represents rank and file officers, welcomed the decision amid concerns over a rise in assaults on police with the body’s national vice chairman Che Donald describing it as a “vital piece of equipment” to keep everyone safe.

Meanwhile, Home Office officials insisted the US-manufactured weapon is believed to be more accurate because its barbs fly faster and in a straighter line towards a suspect.

But any problems could be mitigated by training officers, with courses beginning from the end of September, a department spokesman said.

Mike Cunningham, the College of Policing’s (CoP) chief executive, said all officers carrying Tasers would “continue to be trained to the high national standards”.

Police are required by law to justify each use of a Taser as “necessary and proportionate” as well as adhering to new CoP guidance.

Last year, the Government set aside £10 million so thousands more police officers could carry Tasers – and this fund is expected to help pay for the new models, although the Home Office would not reveal how much they cost.

It is hoped they will save forces money by using rechargeable batteries.

Up to £1 million in funding could be spent as part of a competition launched to help the Home Office find new technology which police officers could use to catch offenders from up to 50 metres away.

This could include using drones, “chemical irritants” or even sounds and energy, according to a list of examples set out by the Defence and Security Accelerator (DASA) – the part of the Ministry of Defence tasked with finding and funding technology for the armed forces, police and security services.

Related – Home Secretary Priti Patel approved the use of the Taser 7, hailing it as a “safe and effective tool for apprehending criminals”