The Prime Minister had branded crossings ‘very bad and stupid and dangerous and criminal’. 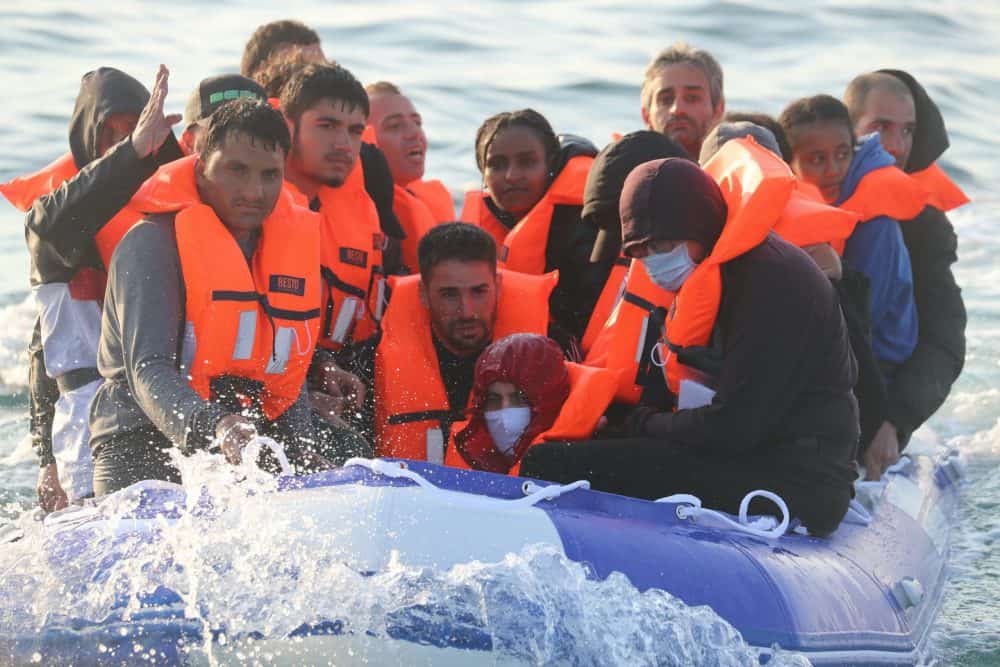 Campaigners have accused Boris Johnson of using “inflammatory” soundbites as he described the migrants’ Channel crossings as a “very bad and stupid and dangerous and criminal thing to do”.

The Prime Minister’s comments came as a French politician warned the UK’s decision to send in the Royal Navy “won’t change anything” and a former Home Office official said he was sceptical of the plans.

Efforts to address the crisis intensified on Monday as more crossings continued in the early hours of the morning, with an inflatable dinghy thought to be carrying more than 20 Syrians met by a Border Force patrol boat off the coast of Dover in Kent.

The Government has faced growing criticism and accusations of being “increasingly chaotic” in its handling of the crisis.

More than 4,000 migrants have now reached the UK so far this year, making the dangerous crossing across the world’s busiest shipping lane.

At least 597 arrived in the country in a surge of crossings between Thursday and Sunday.

She also headed to Dover on Monday to meet Border Force staff and was spotted disembarking from a police boat that had been out in the Channel earlier that morning.

At the same time, the Royal Air Force (RAF) dispatched a plane to survey the Channel after the flight was authorised by Defence Secretary Ben Wallace.

The Home Office has now appointed a former Royal Marine to head up an operation to tackle the problem and formally requested help from the Royal Navy for help.

Immigration minister Chris Philp is due to hold the latest round of talks with French counterparts in Paris on Tuesday.

Speaking during a trip to St Joseph’s school in Upminster, Essex, Mr Johnson said: “Be in no doubt what’s going on is the activity of cruel and criminal gangs who are risking the lives of these people taking them across the Channel, a pretty dangerous stretch of water in potentially unseaworthy vessels.

“We want to stop that, working with the French, make sure that they understand that this isn’t a good idea, this is a very bad and stupid and dangerous and criminal thing to do.”

Downing Street said Brexit would allow the UK to draw up a new framework for dealing with migrants and the country was currently bound by the “inflexible and rigid” Dublin Regulations, the legal obligation to ensure asylum applications are examined and considered.

But the comments prompted anger from charities who criticised the use of “inflammatory language”.

It follows a similar outrage in August last year when Mr Johnson warned migrants would be sent back if they crossed the English Channel to the UK, which campaigners said was “misleading”.

Lisa Doyle, the Refugee Council’s director of advocacy, said: “It’s incredibly disappointing to hear the Prime Minister using such inaccurate and inflammatory language to describe men, women and children who are desperate enough to make perilous journeys across the busiest shipping channel in the world.

“Seeking asylum is not a crime, and it is legitimate that people have to cross borders to do so.”

Instead of “scapegoating people in desperate circumstances”, she urged the Government to introduce measures like a “strong resettlement programme, humanitarian visas and reformed family reunion rules”, insisting that this would see the number of crossings “decline sharply”.

While Stephen Hale, chief executive of Refugee Action, told the Government to “move on from soundbites” and focus “constructively on serious and long-term solutions”.

Britain is better than this

He added: “Britain is better than this.

“We have a proud history of welcoming people fleeing some of the most violent and oppressive regimes in the world and we can’t stop now.”

Meanwhile former foreign secretary David Miliband, the president and chief executive of the International Rescue Committee, told Times Radio “cooler heads need to prevail if the UK is to sustain an effective response as well as a humane response”.

Liberal Democrat Home Affairs spokeswoman Christine Jardine claimed the Government’s attempt to be “tough” on crossings had failed, adding: “If we want to tackle this we need to provide safe legal routes which take migrants out of the hands of criminals.

“This must be coupled with investment in our border forces.”