By Nathan Lee, TLE Correspondent  The NUS is set to reveal a national advertising campaign targeted at MPs who voted to increase student fees, with billboards across Sheffield, Manchester and London from Thursday 23rd April. Dubbed ‘the 2010 pledge breakers’ the advertisement attacks MPs who pledged to scrap tuition fees before voting for the increase. […] 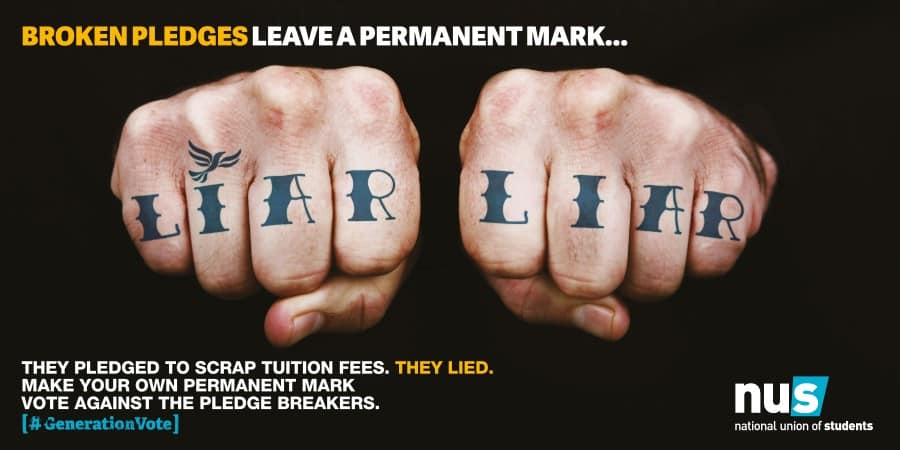 The NUS is set to reveal a national advertising campaign targeted at MPs who voted to increase student fees, with billboards across Sheffield, Manchester and London from Thursday 23rd April.

Dubbed ‘the 2010 pledge breakers’ the advertisement attacks MPs who pledged to scrap tuition fees before voting for the increase. Prominent locations in London Victoria, Sheffield Central and Manchester Piccadilly have been selected with the billboards being erected overnight tonight to be up for the commuter rush on Thursday morning.

The ‘Vote for Students’ pledge saw hundreds of candidates personally promise to students that they would vote against any increase in tuition fees, but once elected, 30 MPs voted to increase fees as part of a coalition government. A tripling of fees.

The campaign has been launched at a crucial time in the run-up to the election, forming part of the Liar Liar campaign which encourages people to:

NUS President Toni Pearce said: “Nick Clegg and all of the other pledge breakers toured campuses all over the country and made personal promises to students. They signed pledges. They held them up for photo opportunities, and used each as currency for election.

“Students queued to vote for the Lib Dems in 2010 on the sole basis of this pledge. It wasn’t a minor misdemeanour. It was an outright lie. We have an obligation to hold them to account for this, and we will.”

Trust in politicians has never been lower. NUS polling has consistently shown that that over three quarters (77 per cent) of students do not trust politicians to keep their promises.