Led By Donkeys offer to sell thebrexitparty.com to Nigel Farage for a £1m donation to the Joint Council for the Welfare of Immigrants. 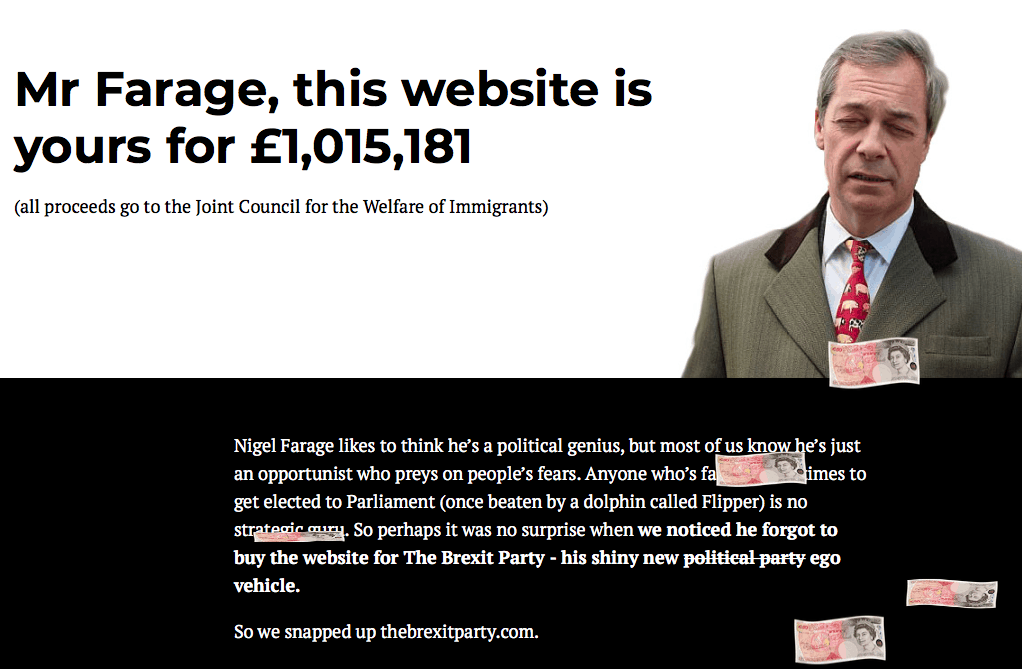 We reported how billboard pranksters and hypocrisy exposers Led By Donkeys bought the website “thebrexitparty.com” when Farage launched his new party before he remembered to register his web domain.

They have posted some of the things Nigel Farage has said which he would rather you were not aware of. Such as his distaste for the NHS in its current form.

Led By Donkeys are now offering to sell the website to Nigel Farage for over a million pounds.

Led By Donkeys said the entire fee, which will increase by £50,000 each day, would be donated to the Joint Council for the Welfare of Immigrants.

The move comes after Brexit Party lawyers contacted Led By Donkeys asking them to remove their logo from the site. The party said the campaign group is refusing to transfer the domain name, which is similar to their official site “thebrexitparty.org”.

Ironically, Led By Donkeys said that the Brexit Party was threatening them under EU law.

The website features a rising total of the cost, along with an “election advent calendar” – which offers examples of the “lies, lunacy and hypocrisy” of the Conservatives and Brexit Party every day until December 12.

“When Farage and his millionaire backers set up the Brexit Party they didn’t have the foresight to buy up all of the websites with their own name – and we did,” Led By Donkeys co-founder Oliver Knowles told the PA news agency.

“With the advent calendar, we are telling the story of the Brexit Party and the Tory Party who are now election partners – and the threat they represent to the country.”

Asked why they chose the immigrant support charity, Mr Knowles said: “Nigel Farage peddles an ideology of hatred and division and it felt like this would be a good and just cause.”

Led By Donkeys bought the domain name earlier this year to challenge Mr Farage’s party during the European Parliament elections in May.

“Who knew Nigel Farage was such a fan of European law?” Led By Donkeys tweeted.

All versions of the Brexit Party logo have been removed from the current version of the website.

Behind the first door of the advent calendar features a video of Mr Farage saying “we’re going to have to move to an insurance-based system of healthcare”.

“There will be a series of other pieces of information about their collaboration and highlighting the lunacy and hypocrisy of their Brexit position over the past few months,” said Mr Knowles.

“Some are describing it as the most important election in a generation and we’re inclined to agree.”

“They have offered to comply with these requests, but so far they are refusing to transfer the domain name.”

Led By Donkeys has made its name protesting against Brexit with various large-scale projects in public spaces, first going viral in early 2019 by sharing politicians’ past comments on billboards.

Brexit Party refuse to publish policies, so Led By Donkeys are helping

Nigel Farage launches Brexit Party but forgot to register website, so this happened when pranksters Led By Donkeys found out.