Larni Zuniga has been described as a "true professional who touched the lives of many". 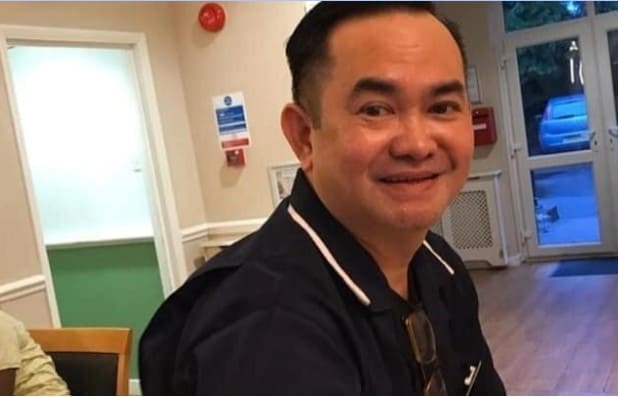 An NHS nurse who battled coronavirus in the same intensive care ward as Boris Johnson has died, according to reports.

Larni Zuniga, 54, was being treated in the same unit at St Thomas’s hospital as the prime minister, his family confirmed.

However the nurse, from the Philippines, sadly lost his battle against Covid-19 – sparking tributes that the married father had “touched the lives of the people around him”.

Zuniga’s cousin, who is also a nurse, said: “Larni was a true professional, who touched the lives of many.

“He made a tremendous difference to a lot of people’s lives and he was highly respected by patients and colleagues alike.”

The nurse – who worked at a care home in Surrey – spent three weeks in intensive care at St Thomas’s, where he was said to be among the sickest patients.

He had reportedly been working in the UK for twelve years, and was in the process of applying for his wife, Edith, to join him from the Philippines before he became sick.

On a GoFundMe page to raise money for Zuniga’s family, a friend – Arnold Barrientos – described the nurse as a “hero”.

He said: “Larni had absolutely sacrificed a lot for his family. He worked hard and he battled hard times of not seeing his family just to ensure a comfortable life for them.

“He influenced a lot of people with his godly counselling and loving, warm personality. He had so many unfulfilled dreams concerning his family due to this early demise, but the little we can give would at least help to alleviate some of their concerns.”

“You touched the lives of the people around you and made us so proud of you. You are the best dad! Thank you for all the sacrifices for our family.”

According to the government’s official figures, 78 NHS staff and 16 carers have already died from Covid-19 – though reporting delays mean the real figure is likely much higher.