A high-tech way of tackling an invasion of killer Asian hornets has been developed.

The fearsome insects, far bigger and more fearsome than the native UK species, first arrived in France in 2004 after sneaking into the country in a shipment of pottery from China.

They’re native to temperate and tropical Eastern Asia and have jaws strong enough to chew through protective clothing that beekeepers wear.

The National Bee Unit has warned that the beasts are likely to fly across the Channel from Europe and spread across the UK. A number of sightings were reported last summer on UK shores.

Apart from the threat to humans, they can destroy a hive of 30,000 honey bees within hours.

Now intrepid researchers intend to tag them like criminals to trace their nests.

Scientists have shown that electronic radio tags could be used to track the invasive insect and stop them colonising Britain and killing our honeybees.

Brave researchers at Exeter University have managed to attach tiny tags to Asian hornets, then used a tracking device to follow them to their nests; the first time this has been achieved.

They tested the technique in southern France and Jersey – where Asian hornets are well established – and the tags led researchers to five previously undiscovered nests.

Lead researcher Dr Peter Kennedy, of the Environment and Sustainability Institute on Exeter University’s Penryn Campus, said: “Our new method of tracking offers a really important new tool to tackle the spread of this invader, providing an efficient means of finding hornets’ nests in urban, rural and wooded environments.”

Asian hornets prey on honeybees and other pollinators, and the scientists say the technique demonstrated in their study could help protect Britain’s “beleaguered pollinator populations”.

Study co-author Professor Juliet Osborne, Director of the Environment and Sustainability Institute, said: “It is vital to find the nests early in the season to prevent the hornet spreading, as later in the year hundreds of new queens emerge and disperse from each nest, each with the potential to make new nests.”

The work was funded as part of the Department for the Environment, Farming and Rural Affairs’ efforts to prepare for future outbreaks of the Asian hornet in the UK. 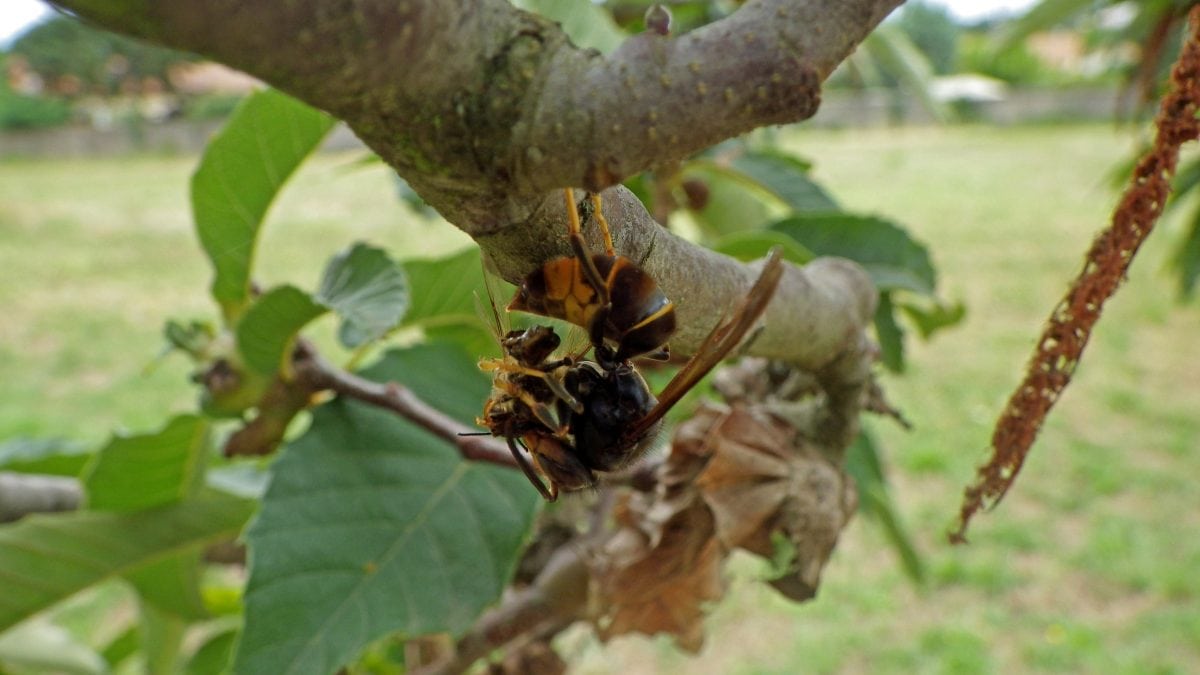 South West beekeepers also saw the urgency of the work, supporting it with their own funds.

Nicola Spence, Defra Deputy Director for Plant and Bee Health, said: “This work is key for ensuring a rapid response to Asian hornets when sightings are confirmed, and in future bee inspectors will be able to use this technique to take swift action.”

Dr Denis Thiéry, from INRA Bordeaux-Aquitaine in France who collaborated on the project, said: “In France, the Asian hornet is unlikely to be eliminated, so efforts are now focussed more on limiting their impact.”

Willie Peggie, Director of The States of Jersey Department of the Environment, where the technique was also tested, said: “We are pleased to be investigating efficient methods of tracking Asian hornets to their nests.

“We’re concerned about their impact on our wild insect pollinators, as well as their effect on local honey production.”

The researchers used the smallest radio tags available – made by UK firm Biotrack Ltd – and attached them to hornets with sewing thread.

Hornets were able to carry them as long as the tag weighed less than 80 per cent of the insect’s weight.

Asian hornets are the latest threat to Britain’s honeybees, which – like many pollinators – are suffering due to factors including habitat loss, parasites and pesticides.

The British Beekeepers Association (BBKA) is also pleased about the development of a reliable technique for tracking the invasive predator.

A BBKA spokesman said: “We are greatly concerned about the possible incursion by the Asian Hornet because of the devastation likely to be caused to honeybees and other pollination insects.”

Adult Asian hornets “hawk” at beehives, meaning that they hover outside to grab bees, before dismembering them and taking them back to their nest to feed to larvae.

The first Asian hornet discovered in Britain was in Gloucestershire in 2016, when a nest was found and destroyed.

Another nest was destroyed in Woolacombe, Devon, last year. In April this year, a single hornet was found in Lancashire.

Asian hornets are smaller than native European hornets, have a largely dark brown or black body and yellow-tipped legs, a distinctive orange-yellow stripe near the end of their abdomen, and often a thin orange-yellow line just behind the “waist”.

Any suspected sighting of an Asian hornet should be reported, ideally with a photo.

The paper was published in the journal Communications Biology.