"We are in a situation of environmental crisis", the Minister of the Environment said. 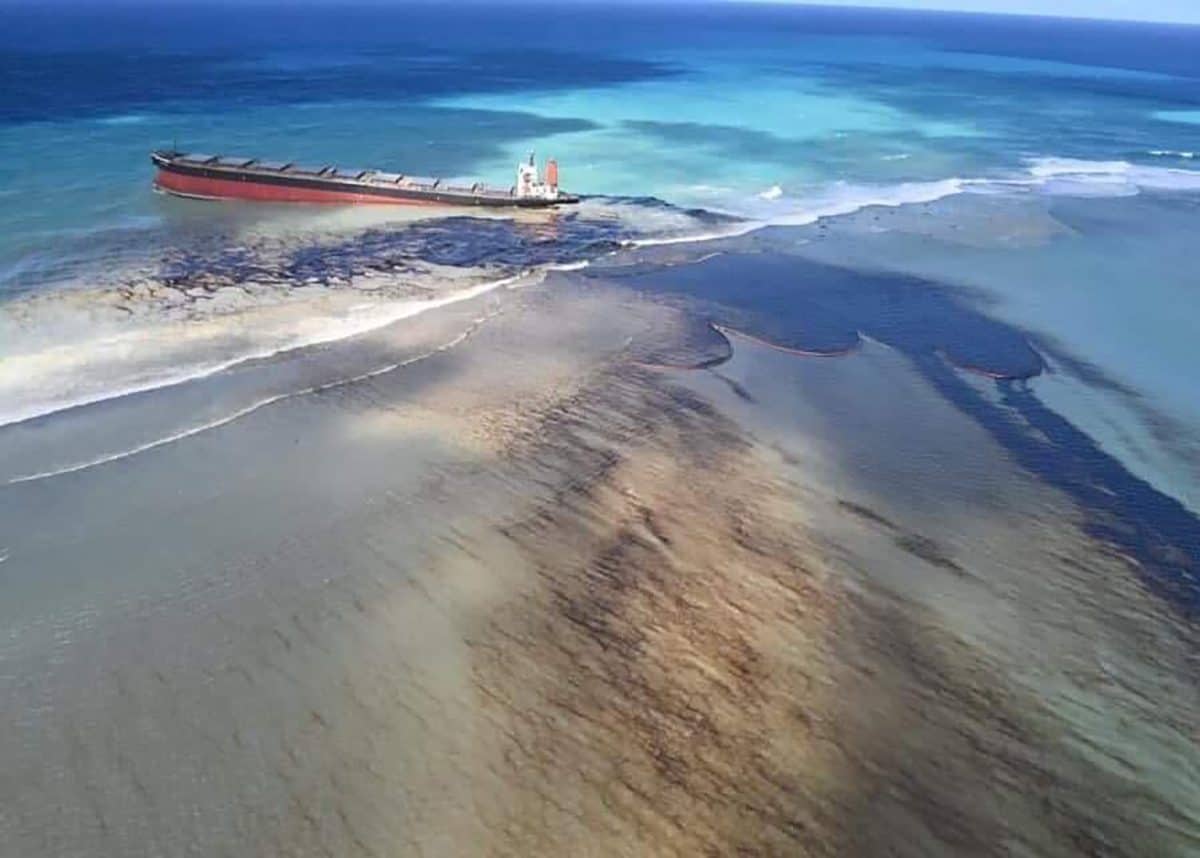 The government has declared an environmental emergency and France said it was sending help from nearby Reunion island.

Satellite images showed a dark slick spreading in the turquoise waters near wetlands that the government called “very sensitive”.

“When biodiversity is in peril, there is urgency to act”

“When biodiversity is in peril, there is urgency to act,” French President Emmanuel Macron tweeted Saturday.

Wildlife workers and volunteers ferried dozens of baby tortoises and rare plants from an island near the spill, Ile aux Aigrettes, to the mainland as fears grew that worsening weather on Sunday could tear the Japanese-owned ship apart along its cracked hull.

A French statement from Reunion on Saturday said a military transport aircraft was carrying pollution control equipment to Mauritius and a navy vessel with additional material would set sail for the island nation.

Residents and environmentalists alike questioned why authorities did not act more quickly after the ship ran aground on July 25 on a reef.

Mauritius says the ship, the MV Wakashio, was carrying nearly 4,000 tons of fuel.

"We are in a situation of environmental crisis".
Kavy Ramano,
Minister of the Environment of #Mauritius pic.twitter.com/xp03LbHrGL

“Why that ship has been sitting for long on that coral reef and nothing being done.”

This is the country’s first oil spill, he said, adding that perhaps no-one expected the ship to break apart.

For days, residents peered out at the precariously tilted ship as a salvage team arrived and began to work, but ocean waves kept battering the ship.

Cracks in the hull were detected a few days ago and the salvage team was quickly evacuated. Some 400 sea booms were deployed to contain the spill, but they were not enough.

Prime minister Pravind Jugnauth says the spill “represents a danger” for the country of 1.3 million people that relies heavily on tourism and has been been hit hard by the effects of the coronavirus pandemic, which has restricted travel worldwide.

“Our country doesn’t have the skills and expertise to refloat stranded ships,” he said Friday.

Bad weather has made it impossible to act, and “I worry what could happen Sunday when the weather deteriorates”.

Heavy winds are expected to push the oil slick even farther along the mainland’s shore.

A Mauritius Meteorological Services forecast for Sunday has advised that seas will be rough with swells beyond the reefs and “ventures in the open seas are not advised”.

Videos posted online have shown oily waters lapping at the mainland, and a man running a stick across the water’s surface then lifting it, dripping black goo. The Mauritian Wildlife Foundation is working to free trapped seabirds and turtles.

Environmental group Greenpeace Africa warned that tons of diesel and oil are leaking into the water. It shared video showing Mauritius residents, to chants of “One, two, three,” shoving the makeshift oil barriers into the sea, while crowds of children and adults hurried to make more.

We have been overwhelmed by the offers of assistance following the dreadful news that oil was spilling from Wakashio. If you wish to offer us any help, please check the details in the communiqué from our website here: https://t.co/fH9HdnWFXP pic.twitter.com/oft7nS70oE

“Thousands of species around the pristine lagoons of Blue Bay, Pointe d’Esny and Mahebourg are at risk of drowning in a sea of pollution, with dire consequences for Mauritius’ economy, food security and health,” said Greenpeace’s climate and energy manager, Happy Khambule.

The country also has appealed to the United Nations for urgent aid, including experts in containing oil spills and environmental protection.

“We are in a situation of environmental crisis,” said the country’s environment minister, Kavy Ramano.

A police inquiry has been opened into possible negligence, the government said.

The Mauritius Marine Conservation Society and other local groups warned that the cleanup could take much longer than expected.

“The great urge for all of us is to ‘get on with it,’” the Mauritian Wildlife Foundation said. “But currently we understand that it may be a waste of time to ‘clean up’ an area where oil may continue to flow in.”