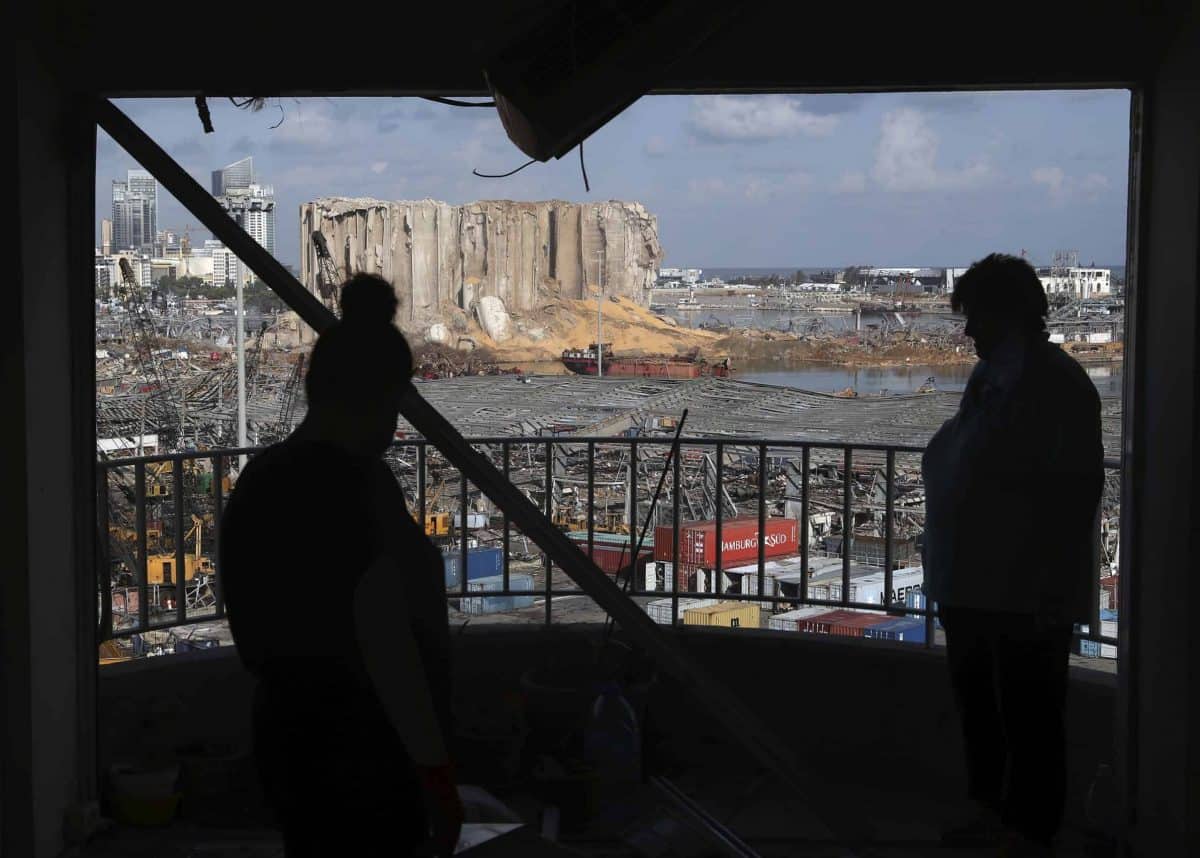 Women stand in their damaged house as they look at the aftermath of an explosion that hit the seaport of Beirut, Lebanon, Monday, Aug. 10, 2020. World leaders and international organizations pledged nearly $300 million in emergency humanitarian aid to Beirut in the wake of the devastating explosion, but warned on Sunday that no money for rebuilding the capital will be made available until Lebanese authorities commit themselves to the political and economic reforms demanded by the people. (AP Photo/Bilal Hussein)

Lebanon’s cabinet has resigned over the devastating explosion in Beirut last week, the country’s health minister has said.

The cabinet has been under increasing pressure after several ministers quit or expressed their intention to step down in recent days.

Hamad Hassan spoke with reporters at the end of a cabinet meeting, which came after two days of demonstrations over the weekend that saw clashes with security forces firing tear gas at protesters.

“The whole government resigned,” Mr Hamad said. He added that Prime Minister Hassan Diab will head to the presidential palace to “hand over the resignation in the name of all the ministers”.

The massive blast on August 4 which decimated the Beirut port and devastated large parts of the city has brought a new wave of public outrage at the government and Lebanon’s long entrenched ruling class.

Protests were planned outside the government headquarters to coincide with the cabinet meeting.

The explosion is believed to have been caused by a fire that ignited a 2,750-tonne stockpile of explosive ammonium nitrate. The material had been stored at the port since 2013 with few safeguards despite numerous warnings of the danger.

The result was a disaster Lebanese blame squarely on their leadership’s corruption and neglect.

The blast killed more than 200 people and wounded about 6,000, in addition to destroying the country’s main port and damaging large parts of the capital. Losses from the blast are estimated to be between £8 billion to £12 billion, and nearly 300,000 people were left homeless in the immediate aftermath.

Mr Diab is expected to address the nation imminently. His cabinet now assumes a caretaker role until a new government is formed.

A Lebanese judge has started questioning the heads of the country’s security agencies. Public prosecutor Ghassan El Khoury questioned Major General Tony Saliba, the head of State Security, according to the state-run National News Agency. It gave no further details, but other generals are scheduled to be questioned.

State Security had compiled a report about the dangers of storing the material at the port and sent a copy to the offices of the president and prime minister on July 20. The investigation is focused on how the ammonium nitrate came to be stored at the port and why nothing was done about it.

On Sunday, world leaders and international organisations pledged nearly £230 million in emergency humanitarian aid to Beirut in the wake of the explosion, but warned that no money for rebuilding the capital would be made available until Lebanese authorities commit themselves to the political and economic reforms demanded by the people.