Aquatic mammals including dolphins use it as a warning an orca is on the prowl - and they are on its menu, say scientists

Killer whales produce a haunting call similar to a ‘human scream’ when seeking their next meal, according to new research.

Aquatic mammals including dolphins use it as a warning an orca is on the prowl – and they are on its menu, say scientists.

Killer whales have a formidable reputation as one of the ocean’s most ferocious predators.

Hunting stealthily in packs, some populations pursue other species of whales, as well as dolphins.

An American and Scottish team of researchers decided to investigate how pilot whales and Risso’s dolphins react to the killer whales’ calls.

They were astonished by the reactions when they broadcast four specific killer whale calls.

Matthew Bowers, a PhD graduate at Duke University, North Carolina, described the response of the dolphins as a “stampede”.

He added: “It was crazy to see a group of animals respond so strongly to something you’re doing.

“The strong and differential responses to this subset of killer whale calls was eye opening.”

Killer whales are sometimes called the “wolves of the sea” because they hunt in groups like packs.

They don’t typically attack humans, but can take down large marine animals, such as sea lions and whales. 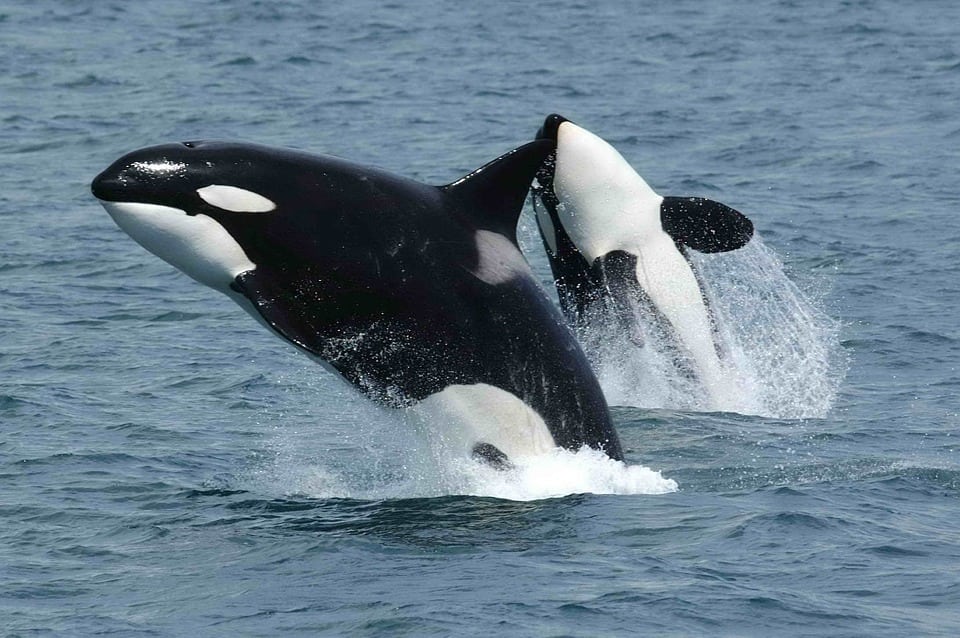 In fact, orcas will prey on almost any animal they find in the sea, in the air over the water or along the coastline.

To hunt, killer whales use their massive teeth, which can grow up to four inches long.

The team included Dr Vincent Janik of the Sea Mammal Research Unit at the University of St Andrews.

They found the pilot whales and dolphins appeared to remain calm when most of the sounds – including many of the killer whale calls – were played into the water.

Back in the lab, they estimated how much energy the animals were using to build a sense of their urgency and reconstructed the dolphin and pilot whales’ movements;

The reactions were completely different. While the pilot whales assembled into a tight group that dived down toward the alarming sound, the dolphins clustered together and fled in the opposite direction at high speed for more than 10 km.

The team also correlated the animals’ movements with the sounds they had heard and found unique features in the distressing killer whale recordings.

These did not occur in calls by members of their own species, the humpback whale calls or the killer whale calls that had not provoked panic.

The distressing calls had many sound structures that occur in mammalian distress cries, including human wails.

Mr Bowers said: “The signal starts to jump around in an unpredictable fashion.”

He explained the features are disturbing because our brains can’t filter out the erratic sounds and ignore them.

Mr Bowers said: “We suggest these calls convey information about the predators’ behaviour or intent.”

They could warn potential victims of the killer in their midst, he added.

Knowing birds and mammals are capable of assessing the risk they are under from predators in the vicinity, his team wondered if sea creatures residing alongside killer whales could distinguish the calls.

The study published in the Journal of Experimental Biology found a subset of orca calls have many of the characteristics that are “found in human screams.”

They trigger other whales and dolphins to flea, while less threatening calls do not provoke them to take evasive action.

Mr Bowers and colleagues sailed 40 miles off the North Carolina coast to monitor pods of pilot whales and to Catalina Island off the coast of California to observe small groups of Risso’s dolphins.

They played recordings of killer whales and social calls from pilot whales, Risso’s dolphins and humpback whales to the animals while observing their reactions.

Mr Bowers said: “Each playback experiment was an all-day endeavour.”

He described tagging one member from each group with a data-logger that recorded the sounds heard by the animals, in addition to their depth and movements.

Then, while the team played the whale, dolphin and killer whale recordings into the water from one boat, Duke colleague Dr Danielle Waples observed the animals’ movements from a second inflatable.

A killer whale makes sounds by moving air between nasal sacs in the blowhole region.
In contrast, a human makes sound by forcing air through the larynx. The larynx of a killer whale does not have vocal cords.