The number of knife crimes being dealt with by the police and courts are the highest in a decade, official figures show.

The shock announcement comes after John Apter, national chairman of the Police Federation of England and Wales, has called on ministers for a 10-year budget strategy to allow police forces to properly plan for the future after a decade of cuts has “decimated” police  forces.

The Police Federation chief made a plea this week to the government, saying previous requests had “fallen on deaf ears.”

Diane Abbott MP, Labour’s Shadow Home Secretary, responding to the plea from the chair of the Police Federation of England and Wales, said: “The government urgently needs to explain how they are going to make good on their manifesto commitment to recruit 20,000 additional officers and what resources they are going to provide.

“There is a danger that the pledge on police numbers goes the same way as the pledge on nurses, where new recruits are not extra police at all. This would be another Tory failure on policing, after they were responsible for this crisis by axing more than 20,000 police officers.”

On Tuesday the Prime Minister ordered all Whitehall departments to take action on tackling crime. 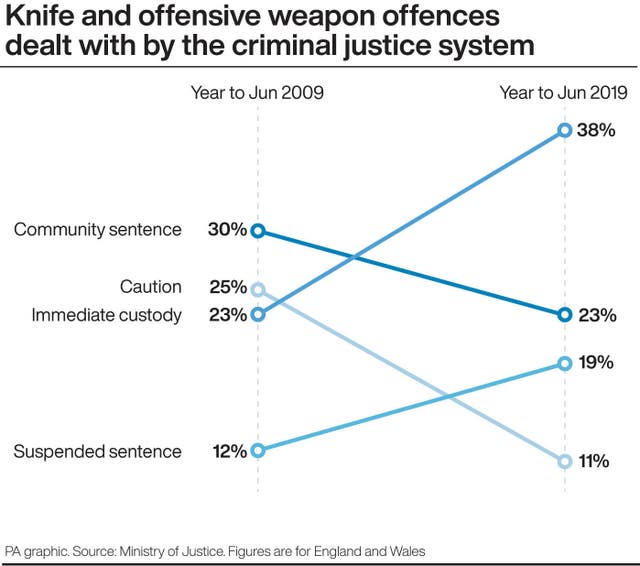 In August 321,000 fried chicken boxes that feature the Government’s #knifefree campaign and suggested other hobbies for youth to take up instead of knife crime were derided as “embarrassing”, “stupid” and “borderline racist”.

In October we reported that the number of first-time knife crime offenders has risen by 25 per cent in the last five years, according to official figures.

The proportion of repeat offenders sentenced who had previous convictions for similar crimes has also jumped to nearly 30 per cent, its highest level on record.

As Met chief hits back at government claim police cuts aren’t linked to violent crime, these are just some of the knives the Met has taken off the streets of London