By Pieter Cranenbroek As Owen Jones has noted, the Tory election campaign has proved far from a Machiavellian plan to win the election. The Conservatives’ personal attacks on Labour leader Ed Miliband have backfired and they are openly mocked for making silly blank cheque promises. Good news for Labour, except there is one problem: Labour […] 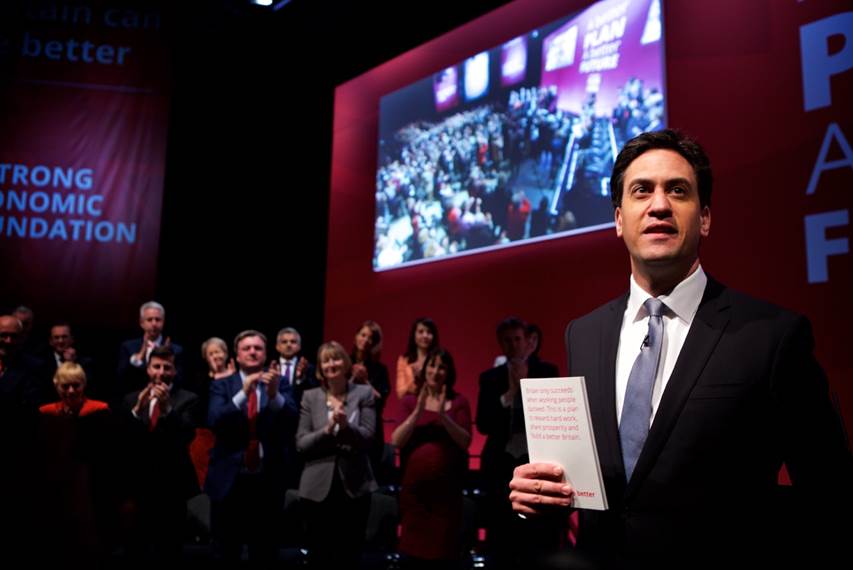 As Owen Jones has noted, the Tory election campaign has proved far from a Machiavellian plan to win the election. The Conservatives’ personal attacks on Labour leader Ed Miliband have backfired and they are openly mocked for making silly blank cheque promises. Good news for Labour, except there is one problem: Labour is still more or less tied with the Tories. Many blame Miliband’s persona for this but Labour’s real problem is its inability to influence the battleground of the debate.

‘You know there’s a huge difference between me and David Cameron.’ Last week, Ed Miliband disputed SNP leader Nicola Sturgeon’s claim that there is not enough daylight between him and the Tory leader. Based on his party’s plans for the future, few would disagree: Labour wants to repeal the health and social care act, end the bedroom tax, raise the minimum wage and ban zero-hour contracts to name some key differences with the Conservatives. In spite of all this, Sturgeon may have hit a nerve because Labour is struggling to get their positive message out.

Nothing highlights this problem more poignantly than the first page of Labour’s manifesto. Where people expected a message of hope, Labour promises to be responsible with the money and pledges to cut the deficit every year. Not exactly the message people want to hear after years of austerity. It is also not quite clear to whom Labour is appealing to when they are advertising ‘controls on immigration’ mugs and boast that they will be ‘tougher than the Tories on benefits.’ It won’t help Labour win over voters on the right but it will alienate voters on the left. It also helps point the spotlight to policy areas like the economy and immigration in which the general public do not expect them to outperform the Conservatives or Ukip.

You could say that Labour has let the Conservative party choose the battleground of the election or, as George Monbiot has put it, ‘Labour has allowed the Conservatives to frame its politics.’ That’s a shame, because there is a reason David Cameron is reluctant to publicly defend his government’s ‘achievements’. The coalition of broken promises is, amongst many other things, responsible for a rise in VAT and tuition fees, increased food banks use and a widening of the inequality gap. Unfortunately, Labour does not manage to grill Cameron enough on his record and instead finds itself defending its own budget plans.

Labour’s inability to set the agenda is also what caused it to lose support in Scotland. As the party threatens to lose about 30 of its Scottish seats, it will pay the price for standing shoulder to shoulder with the Tories and participating in their campaign of fear for the Scottish independence referendum. Labour should have run a more positive campaign of its own as the party will not be punished for supporting the No campaign, but for the way it did this. Labour failed to take the initiative then, and it is insufficiently succeeding now in steering the debate to the themes where they differ most from the Tories.

Of course, many try to pin the blame for Labour not leading convincingly in the polls on its leader. While it is true that Ed Miliband is less charismatic than his brother David and trails Cameron in terms of personal approval ratings, we should not overstate its significance. If anything, the caricature that the right-wing press has created of the Labour leader may have proved easier to debunk than attacks on policies. Since the start of debate season, the British people have seen a passionate Miliband make a much better impression than a largely uninspired Cameron. It all goes to show that Labour’s handicap in this election is not its leader but its defensive strategy.

Labour may still lead the next British government, and it is important that they do for so many reasons. But with the abysmal track record of Cameron’s government and the Liberal Democrats in strong decline it quite frankly should have done better than to tie with the Conservatives. If Labour fails to win the election, it will have more to do with the way it has communicated its message than with the leader it chose in 2010.