As the UK observed a minute's silence on #WorkersMemorialDay a hospital worker shockingly faced a disciplinary hearing after asking for personal protective equipment to keep himself and his family safe. The London Economic INVESTIGATION finds PPE still a major issue for outsourced health staff working for private firms: 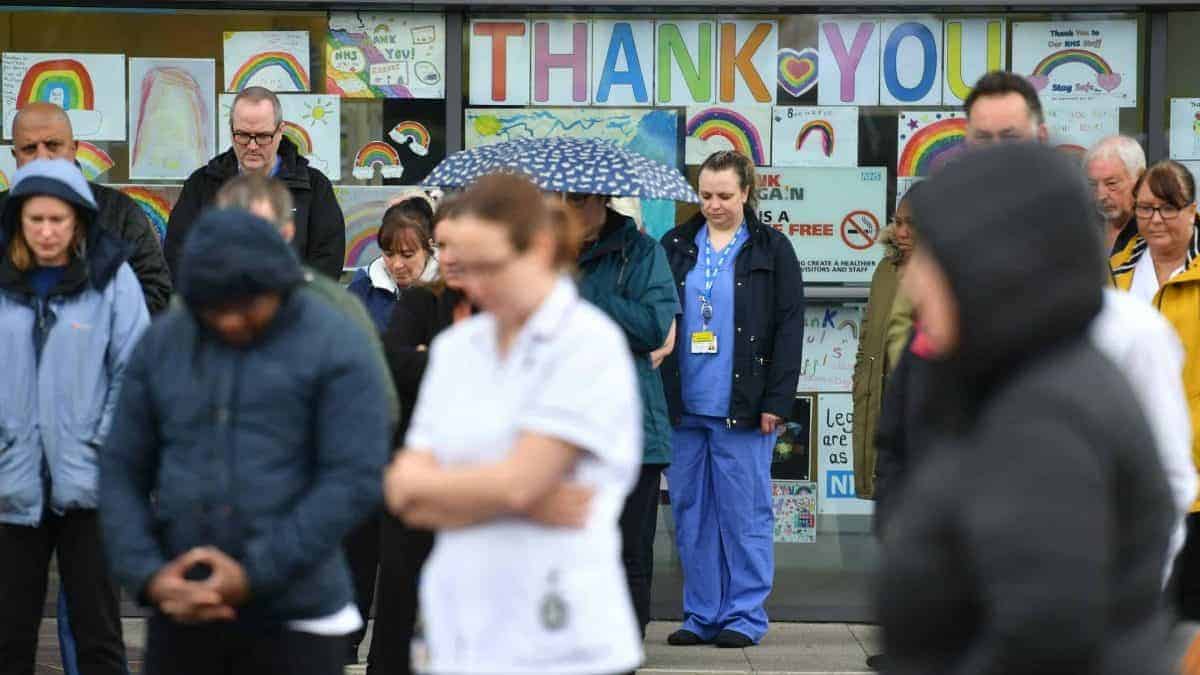 As the nation fell silent to mark Workers Memorial Day and the loss of over 100 NHS and social care workers, the UK Government was reeling from revelations over its failure to protect workers with adequate PPE.

Over 100 NHS and social care workers are now known to have died with Covid-19 in the UK. Among the dead are outsourced hospital workers such as porters, many of whom are complaining of a lack of provision of Personal Protective Equipment (PPE).

As the nation remembered his colleagues who had died with a minute’s silence, one hospital cleaner told us he was being disciplined this morning and had been suspended after a dispute over being refused PPE. The hospital worker employed by private contractors ISS at Queen Elizabeth’s hospital, in Woolwich now faces the sack.

The cleaner who works near the entrance of the south London hospital told The London Economic he was told he wasn’t entitled to wear a face mask, despite “people walking in and out coughing and sneezing” near him. The 57-year-old said he requested a mask as he lives with his brother who is self-isolating as he has two serious lung conditions.

The GMB Union that represents many outsourced hospital workers like him called the case “staggering.”

Local GMB Organiser Helen O’Connor told The London Economic: “It is ironic that on Workers Memorial Day a GMB member is facing a disciplinary hearing for asking for personal protective equipment to keep himself safe at work. For far too long outsourced hospital workers have endured the type of conditions that are hazardous to human health and now that we are in the middle of a coronavirus pandemic the risks to these workers have escalated even further.

“Surely it is a basic human right to be safe when you are in work? Unfortunately many of our outsourced NHS GMB members endure the type of conditions that were commonplace in the victorian era. Alongside low pay, comes breaches of health and safety and bullying and harassment to stop these workers fighting for their rights or speaking out about wrongdoing. The death toll of NHS workers is rising so while we gather to commemorate those who have died we must commit ourselves to fight for the living.”

The worker under investigation said he threatened to walk out of the hospital after being told he couldn’t wear a mask.

After the dispute which ensued, he has now been told by employer ISS that he has been suspended with a final warning for “gross misconduct” and disciplinary proceedings against him for “violent behaviour,” which he denies. The London Economic approached the Lewisham and Greenwich Trust which referred us to ISS for a comment.

An ISS spokesperson insisted: “ISS is following all Covid-19 guidelines as set by the government and working very closely with Public Health England and the NHS to ensure that our employees are protected and are as safe as possible. The investigation of the employee referred to is unrelated to Covid-19, or with regards to PPE. Our employees are provided with the appropriate Personal Protective Equipment (PPE), in accordance with their role and in line with government guidelines.”

“I just turned around and said if you’re not going to give me PPE I’ll go home. I was called back into the office and told they were starting disciplinary proceedings against me,” he recounted, adding that he was “upset” to have received a written warning on a day colleagues who had died fulfilling work duties were being honoured around the country.

The London Economic has learned that auxilliary and outsourced healthcare staff are among those who have perished during the Covic-19 pandemic.

The London Economic also spoke to other outsourced hospital staff around the country who reported inadequate access to proper PPE; being told not to wear PPE in public corridors so as not to scare the public; and having to borrow PPE from wards. One porter working at St Helier Hospital described wearing the same mask for three days running.

As the Prime Minister joined a minute’s silence to remember workers who had died, ministers were facing growing revelations over PPE shortages and failing to meet World Health Organisation (WHO) guidelines.

A BBC Panorama investigation on Monday night revealed a catalogue of failures to equip frontline staff with the PPE they need to protect themselves and the public from transmitting Covid-19.

The government gave misleading figures of PPE obtained and downgraded Covid-19 covering up how the PPE it provides healthcare workers falls well below guidelines including WHO recommendations. Meanwhile several UK companies have claimed the government ignored their offers to supply masks and medical gowns. Head of a Merseyside chemicals firm, Volker Schuster, told The Guardian that he had offered to supply ten million masks. However, by the time he received a reply, they had already been sold to other countries.

Sir Keir Starmer said “too many” frontline workers have died during the fight against coronavirus “and we owe them a huge debt”. The Labour leader said: “Nobody should put their lives at risk because they haven’t got the right protective equipment. We owe it to them to make sure that we’ve got the right equipment, in the right place at the right time, and we will continue to press on that.”

Meanwhile, the Health Secretary was urged to issue a public apology over PPE shortages by the son of a doctor who died after warning the Government about a lack of PPE.

Intisar Chowdhury, the son of Dr Abdul Mabud Chowdhury, who died earlier this month after being diagnosed with Covid-19, challenged the Health Secretary during a live phone in on LBC. Five days before he was admitted to hospital, Dr Chowdhury, 53, wrote a Facebook post asking Prime Minister Boris Johnson to urgently provide every NHS worker with PPE.

“We took very, very seriously what your father said and we’ve been working around the clock to ensure that there’s enough protective equipment and in the case of anybody who works in the NHS or in social care and has died from coronavirus we look into it in each case to find out the reasons where they might have caught it and what lessons we can learn,” Matt Hancock said.

Asked by host Nick Ferrari whether he accepted that mistakes were made in the provision of PPE, Matt Hancock replied: “Well, there are things that we’ve changed as we’ve gone through, both because we’ve learnt more things about the virus, also because things didn’t work out as we expected.”

The Society of Occupational Medicine, whose members include more than 1,700 doctors, nurses, physiotherapists, occupational therapists and technicians, has said the goal should be zero work-caused fatalities.

Overall in the week between April 11 and 17, which includes Easter Sunday, there were 22,351 deaths, with Covid-19 mentioned on 8,758 death certificates.

It is calling for the Government to prevent any further work-related deaths and for employers to carry out risk assessments so people can safely return to their jobs whenever the lockdown is eased.

England and Wales suffered their deadliest week on record this month as new figures revealed the coronavirus death toll is over 7,000 higher than previously reported.

Data from the Office for National Statistics (ONS) released on Tuesday showed the number of Covid-19-related deaths from the start of the year to April 17 was 35 per cent higher than previous estimates. This is the highest weekly total since comparable records began in 1993.

The UK is suffering 315 deaths per million population – which as of Monday night was twelve times more than the world average.

Dame Donna Kinnair, chief executive and general secretary of the Royal College of Nursing, said: “I am heartened to hear how many people took part in the minute’s silence to honour the memory of staff who have tragically died during the pandemic.

“We thought it was important to pay tribute publicly to those who have lost their lives to the virus, and I am proud that so many took the time to do so this morning.”

She issued an urgent call for protection of workers, saying the death toll must not be allowed to rise further: “An even greater task now remains – to stop more joining the tragic number of those who have died. All key workers, healthcare staff among them, must be afforded the greatest protection.”