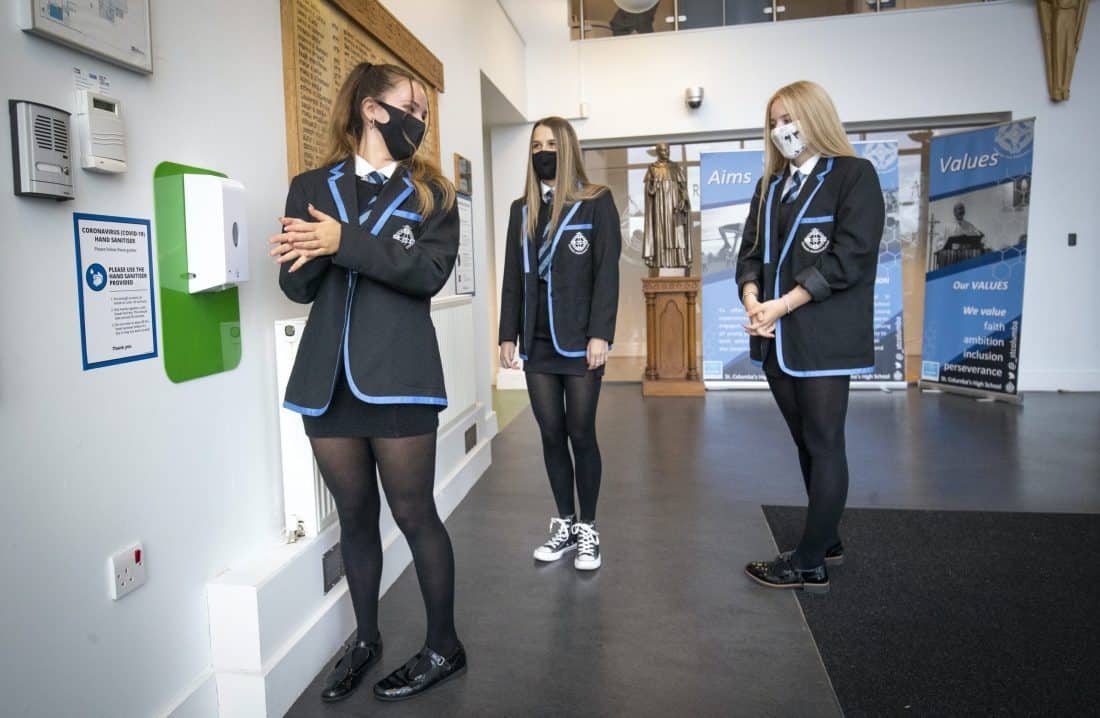 A number of schools across the UK have been hit with coronavirus cases since pupils returned to class.

One secondary school in Suffolk closed its doors just days after reopening, while whole classes at two schools in Wales have been told to self-isolate for two weeks following confirmed cases of Covid-19.

It came as Health Secretary Matt Hancock suggested that young people under-25 – particularly those aged 17-21 – have helped propel the rise in positive coronavirus cases across the country in recent days.

Schools in England and Wales began reopening to all year groups last week for the first time since March, and the remainder are due to open this week.

The National Education Union (NEU) is calling for a “more robust and accessible” test and trace system after it said it had heard reports of teachers being told to travel hundreds of miles for a test.

Five members of teaching staff at Samuel Ward Academy in Haverhill, Suffolk, have tested positive for Covid-19, with the academy closed on Monday on the advice of Public Health England.

Two other members of staff are waiting to hear their coronavirus test results.

The school said the closure was a “precautionary measure” and it hoped to reopen on Tuesday.

At least eight schools in Wales are believed to have been affected by coronavirus since reopening.

Cardiff Council announced on Monday that 30 pupils from Ysgol Bro Edern had been asked to self-isolate for 14 days following the confirmation of a case.

The Year 7 pupils were identified as contacts of a student who tested positive for Covid-19 on Sunday.

Headteacher Iwan Pritchard said the school had contacted all pupils within the student’s class bubble “as quickly as possible” and additional cleaning had taken place.

A class of 21 pupils at St Gwladys Primary School in Bargoed, Caerphilly, were also told to self-isolate for two weeks after a member of staff tested positive for Covid-19.

Meanwhile, the return to school for some year groups was delayed at Ysgol Bryn Castell in Bridgend, and Ysgol Maesteg after members of staff tested positive for Covid-19.

On Monday, the Welsh Government announced that more than £2.3 million had been committed to provide free face coverings for all secondary school and further education students.

Coronavirus cases have also been confirmed at three schools in the area around Middlesbrough.

The JCB Academy in Rocester, Staffordshire, closed on Friday after a pupil tested positive for coronavirus – and around 100 students were told to self-isolate.

Kevin Courtney, joint general secretary of the NEU, said: “We need a far more robust and accessible trace track and test system with testing centres within a reasonable distance.

The union is calling for the Government to plan for outbreaks – by employing more teachers and looking for additional space – to ensure that young people’s education is as “uninterrupted as possible”.

“The Government cannot side-step its responsibility, leaving schools and colleges to carry the can for its inadequate preparations,” Mr Courtney added.

Mr Hancock suggested that affluent youngsters have helped to propel the rise in cases as he implored people to stick to social-distancing measures.

Speaking on LBC radio on Monday, he said “nobody wants to see a second wave” in the UK and that a recent surge in cases was “concerning”.

There were a further 2,988 lab-confirmed cases of coronavirus in the UK as of 9am on Sunday – the largest daily figure since May.

Mr Hancock admitted that there have been “operational issues” over testing, when probed about people being asked to travel long distances for tests.

Geoff Barton, general secretary of the Association of School and College Leaders (ASCL), said it is “impossible” to eliminate entirely the risks of transmission either in school or the wider community.

He added: “It is therefore likely that disruption will continue over the coming weeks and months.

“This shows the necessity for a robust contingency plan in case students are unable to take GCSE and A-level exams next summer or their preparation is significantly disrupted.

“The Government must take action now on such a back-up plan before time runs out.”