A giant turtle that swam the oceans 228 million years ago didn’t have a shell, say scientists.

The weird-looking reptile sported a telltale beak – and had an unusual body shaped like a Frisbee.

But its wide ribs hadn’t grown to form the iconic carapace that turned them into impregnable walking fortresses on land.

Named Eorhynchochelys sinensi for ‘first turtle with a beak’, it was bigger than the leatherback – the biggest sea turtle living today.

Measuring 8ft 2in in length (2.5 metres) it lived during the Triassic at a time when the earliest dinosaurs were diverging into a range of species that took over the Earth. 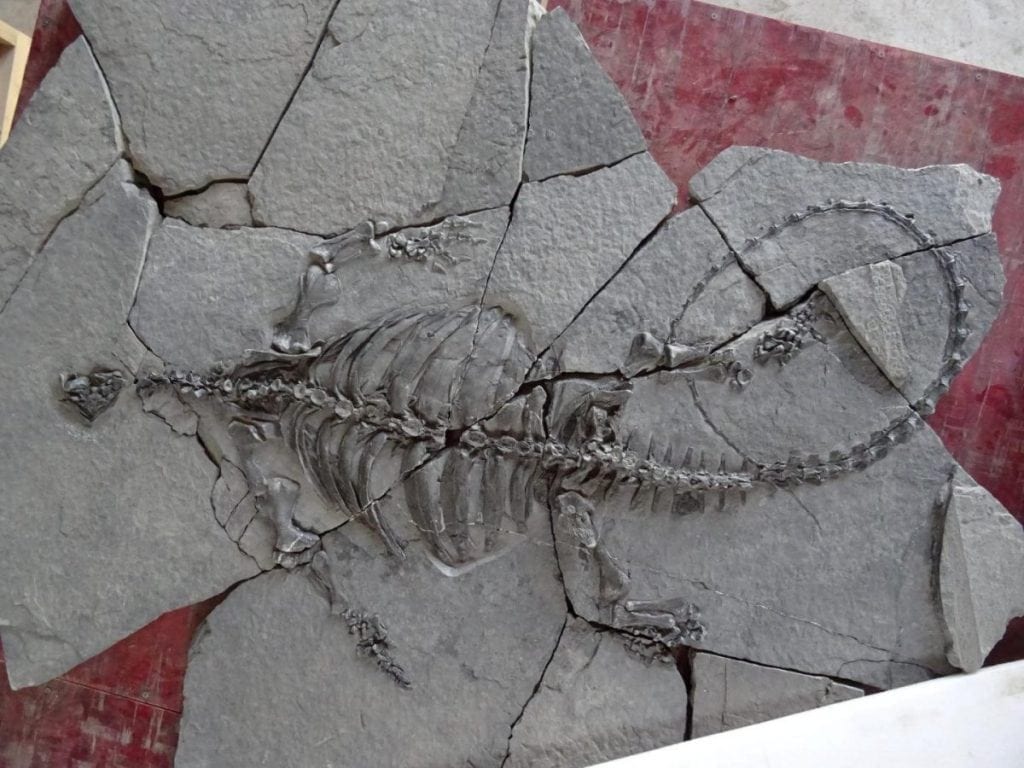 He said: “This creature was over six feet long. It had a strange disc-like body and a long tail – and the anterior part of its jaws developed into this strange beak.

“It probably lived in shallow water and dug in the mud for food.”

Its fossilised remains dug up in China provide the first evidence of a turtle having a beak with no teeth – and sheds fresh light on their evolution.

Biologists have argued over the murky origins of the turtle for a century – a debate almost as slow and plodding as the animals themselves.

Its two key features are its shell and its toothless beak. Eorhynchochelys had the latter – but not the former.

And it isn’t the only kind of early turtle scientists have unearthed. Another had a partial shell – but no beak.

Until now it’s been unclear how they all fit into the reptile family tree.

Dr Rieppel said: “The origin of turtles has been an unsolved problem in palaeontology for many decades.

“Now with Eorhynchochelys, how turtles evolved has become a lot clearer.”

The fact that Eorhynchochelys developed a beak before other early turtles but didn’t have a shell is evidence of a phenomenon dubbed ‘mosaic evolution.’

This is the idea traits can evolve independently from each other and at a different rate – and not every ancestral species has the same combination.

Modern turtles have both shells and beaks – but the path evolution took to get there wasn’t a straight line.

Instead some turtle relatives got partial shells while others got beaks.

Eventually the genetic mutations that create these characteristics occurred in the same animal.

Co-author Dr Nick Fraser, a specialist in vertebrate palaeontology at National museums Scotland in Edinburgh, said: “This impressively large fossil is a very exciting discovery giving us another piece in the puzzle of turtle evolution.

“It shows early turtle evolution was not a straightforward, step-by-step accumulation of unique traits but was a much more complex series of events that we are only just beginning to unravel.”

Fine details in the skull of Eorhynchochelys solved another mystery – showing turtles are related to modern lizards and snakes.

For years scientists weren’t sure if their ancestors were part of the same reptile group – known collectively as diapsids.

It was thought they were anapsids – primitive reptiles that lack these openings. But the new species has disproved this.

Dr Rieppel said: “With Eorhynchochelys’s diapsid skull, we know that turtles are not related to the early anapsid reptiles, but are instead related to evolutionarily more advanced diapsid reptiles.

“This is cemented, the debate is over.”

The findings published in Nature will change how scientists think about this fascinating branch of animals.

“Until I saw this fossil, I didn’t buy some of its relatives as turtles. Now, I do.”

Recent research has suggested turtles evolved shells not for defence – but for digging.

They anchored the powerful arm strokes needed to shift soil and sand.

For a long time the oldest known turtle was a creature called Proganochelys – which already had a fully developed and very spiky shell.

Everything changed in 2008 when Chinese members of Dr Rieppel’s team discovered a 220-million-year-old turtle with a shell that covered just its belly and not its back.

They called it Odontochelys semitestacea—literally, the “toothed turtle in a half-shell.” It was as beautiful an intermediate fossil as they could have hoped for.

Eorhynchochelys was collected from sediments in Guizhou in south western China about 25 feet (7.5 metres) below where Odontochelys was found – indicating its older age.

Most striking is the skull, which is much more turtle-like than Odontochelys – with a closed upper temporal region and evidence of a rhamphotheca or outer surface on the toothless beak.