President Donald Trump has landed at Stansted Airport in Essex for a controversial three day state visit with first lady Melania Trump. Before Air Force One even touched down, the President of the United States faced a protest against his reckless policy on climate change. An environmental protestor mowed a giant penis into a field […] 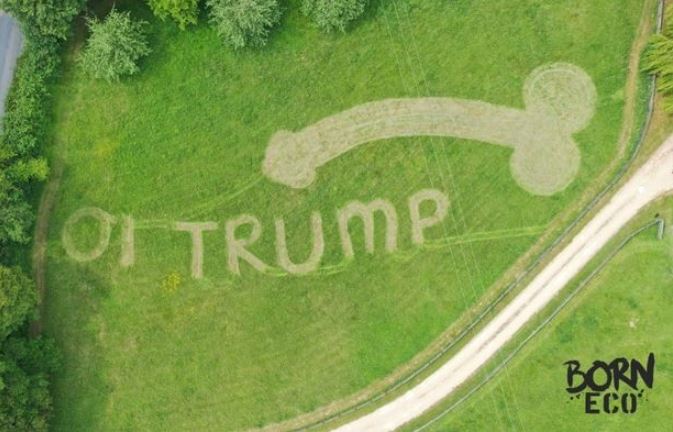 Before Air Force One even touched down, the President of the United States faced a protest against his reckless policy on climate change.

An environmental protestor mowed a giant penis into a field near the airport.

The image, which is accompanied by the message “Oi Trump” was left by 18-year old student, environmentalist and entrepreneur Ollie Nancarrow, mowed the rude protest in a field at his parents’ home in Hatfield Heath.

“Guess who’s been busy today mowing a stiff message for Trump under the Stansted flightpath…” the protestor tweeted.

He also wrote ‘CLIMATE CHANGE IS REAL’ with a giant image of a polar bear in a nearby field.

“Please share and let’s see how far we can spread the welcome!” the prankster tweeted.

As well as visiting the Queen who hosts state visits, Donald Trump is set to meet the Prime Minister at Chequers and travel to his Turnberry Golf Course in Scotland.

The controversial president has already engaged in a Twitter war of words with teh London Mayor who has given permission for the Trump blimp – his giant inflatable likeness as a baby to fly over teh capital again.