Gavin Williamson has apologised to students affected by the Government’s handling of results. 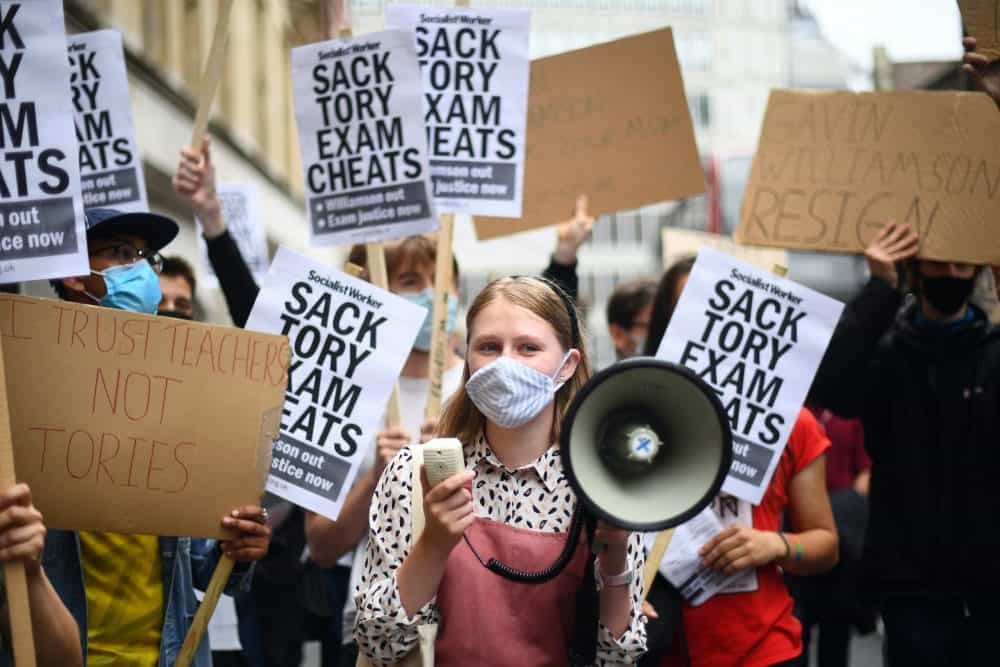 Education Secretary Gavin Williamson has resisted calls to resign over his handling of A-level and GCSE grades in England, but he has apologised to thousands of students for the distress caused.

The Government announced a U-turn on Monday when it said students would be able to receive grades based on their teachers’ estimates following anger over the downgrading of thousands of A-level grades.

But Mr Williamson has repeatedly refused to say whether he would consider resigning from his position.

The minister said there had been “broad political consensus” across all parties that a standardisation model was needed for teachers’ assessments of grades after exams were cancelled amid Covid-19.

Mr Williamson insisted that England’s exams regulator Ofqual “didn’t deliver” the grading system that the Government had “reassured” would be in place.

Universities have called for urgent support from the Government to ensure A-level students do not miss out on their first choice places.

Students who now have higher grades amid the U-turn – which came four days after A-level results were announced – could still be asked to defer their place if there is no space left on their preferred course.

Speaking on BBC Radio 4’s Today programme on Tuesday, the Education Secretary said: “I’d like to just start off by apologising, saying sorry to all those young people who have been affected by this.

“This is something that, firstly, none of us wanted to see and none of us expected to see.”

Tory MP and chairman of the education select committee Robert Halfon called the situation with exams a “mega-mess” after he had warned of the risk that disadvantaged pupils could be negatively affected.

Asked who is to blame for the problems in the exams system, the Conservative MP told ITV’s Good Morning Britain: “We need to find that out. I’d like to see the minutes of everything that has gone on.

He said: “I also think we should find out how much this has cost the taxpayer just so that we make sure that this never happens again.”

“What has happened has been a mega-mess and I really feel sorry for all the pupils and students and parents across the country who’ve had so much anguish over the past week through no fault of their own,” Mr Halfon added.

Shadow universities minister Emma Hardy said Mr Williamson’s delay in allowing pupils to be given grades estimated by teachers has caused a “massive headache” for universities.

She told BBC Breakfast: “His delay in making this decision has meant that more and more places at university have been filled up.

“Many students have gone ahead and accepted their second-place offers or other offers, or in fact got offers that maybe in the past they wouldn’t have actually been entitled to.”

Asked whether she believes Mr Williamson should resign, she said: “Well, I know if I was in charge of the Government he certainly wouldn’t be in my team, but that’s a matter for Boris Johnson.”

Speaking on BBC Breakfast, Mr Williamson said: “What we’re doing is we’re focusing on delivering the grades for those children.

“We’re making sure that we’re going to make sure that all schools are returned and I’m absolutely determined over the coming year that I’m going to be delivering the world’s best education system.”

The Westminster Government’s U-turn in time for the GCSE results in England on Thursday brings the nation into line with Scotland, Wales and Northern Ireland, which will all use teacher-predicted grades.

Prime Minister Boris Johnson and Mr Williamson had previously defended the “robust” system, while the Education Secretary had insisted there would be “no U-turn, no change” and said a shift could lead to “rampant grade inflation”.

Ofqual’s chairman Roger Taylor admitted the regulator had gone down the “wrong road” and apologised.

Mr Williamson accepted it had produced more “significant inconsistencies” than could be rectified through an appeals process, saying it became “apparent” to him that more action would need to be taken after Ofqual released additional data about its algorithm.