A flesh eating winged dinosaur that roamed Earth at the same time as T. Rex sported a spectacular head crest… which it used to woo the ladies. And it was a colourful beast with a blue face and unusually long, pink flamingo-style neck, according to an artist’s impression. The weird new species had huge, razor-sharp […] 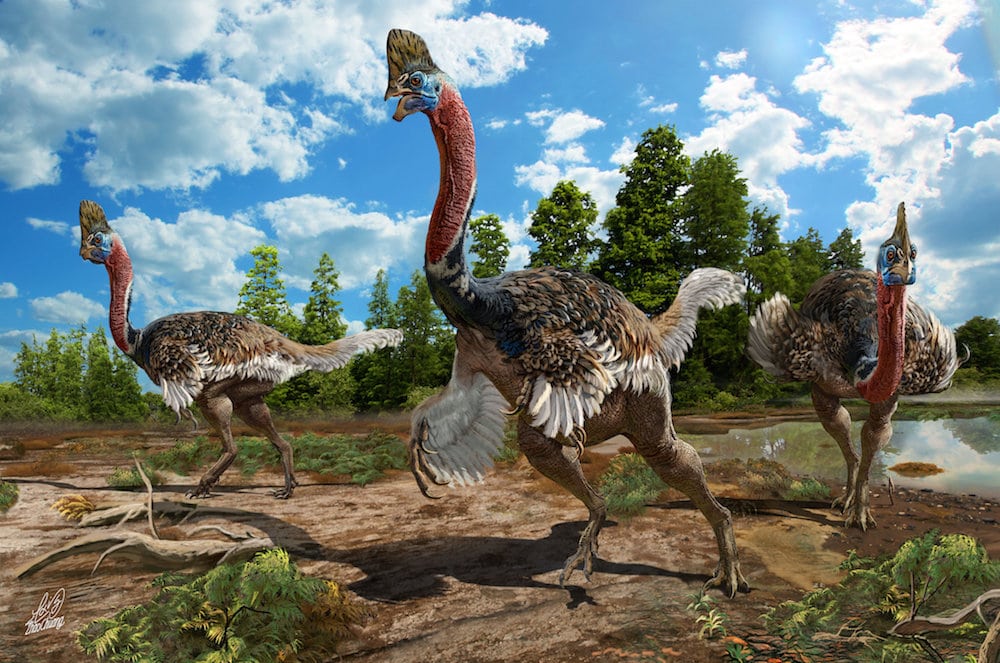 A flesh eating winged dinosaur that roamed Earth at the same time as T. Rex sported a spectacular head crest… which it used to woo the ladies.

And it was a colourful beast with a blue face and unusually long, pink flamingo-style neck, according to an artist’s impression.

The weird new species had huge, razor-sharp claws and a stout but powerful toothless beak that ripped smaller animals apart.

Looking like a giant turkey on stilts, it stood about 10 feet tall on its hind legs and weighed about 37 stone.

But its most striking feature was the pointed helmet, similar to the crest or ‘casque’ on the head of the cassowary – a flightless Australian bird related to emus and ostriches.

The almost complete skeleton of Corythoraptor jacobi, including its skull and jaw,were unearthed at a construction site in Ganzhou, southern China.

It lived during the Late Cretaceous between 100 and 66 million years ago and was at least eight years old when it died in early adulthood.

It is believed the crest of Corythoraptor served the same purpose as that of modern cassowaries – for fighting and sex!

Professor Junchang Lu said it would have been used to intimidate rivals – and as an expression of fitness to attract mates.

Crests on male dinosaurs were more decorative, which they used to show off.

Palaeontologist Prof Lu, of the Chinese Academy of Geological Sciences, Beijing, said: “We hypothesise, based on the inner structure compared to that in modern cassowaries, that the prominent casque of Corythoraptor was a multifunction-structure utilised in display, communication and probably expression of fitness during mating seasons.

“Corythoraptor jacobsi bears a distinct cassowary-like crest or helmet and has a long neck which exhibits similar morphology to the modern flight-less cassowary bird from Queensland in Australia.”

The remains of Corythoraptor, which means “cassowary-like crest”, are housed at Jinzhou Paleontological Museum in Liaoning Province.

Prof Lu said: “The skeleton including skull and lower jaws is almost complete. Most of the skull is preserved. The skull bears a high crest. The internal structure of the crest is similar to the casque of a cassowary. The jaw is toothless.”

The two-legged animal, described in Scientific Reports, belongs to a family of feathered dinosaurs called oviraptorosaurs.

These are characterised by their short, toothless heads and sharp beaks. They ranged from turkey sized to 25 feet long. Others also had crests of bone on their head.

Fossil discoveries in recent decades suggest the group was experiencing a population boom, diversifying into new species, during the 15 million years before an asteroid slammed into the coast of Mexico – wiping out all the non-bird dinosaurs.

Prof Lu said: “The cassowary-like crest in the skull is similar to the casque of cassowaries, which serves a sociosexual role and functions in visual and acoustic display.

“It is therefore reasonable to assume that the cassowary-like crest of Corythoraptor jacobsi was probably utilised in a similar way.

“The sharp claw and long neck of Corythoraptor jacobsi may also indicate its living behaviour is perhaps similar to the modern flightless cassowary.

“It seems more reasonable to assume that the cassowary-like crest of Corythoraptor was more likely the multifunctional structure that conspicuously expressed fitness, and probably sex, of each individual of Corythoraptor.

“The study revealed the type specimen of Corythoraptor jacobsi was probably at least eight years old but still not a fully grown individual.

The cassowary is the world’s second biggest bird – and the most dangerous. If threatened it will attack with a swift karate kick with its powerful legs equipped with dagger-like claws.

This endangered dinosaur bird is a shy solitary animal that lives in the rainforests of northern Queensland . With only 1,200 left in the wild, the endangered bird is facing certain extinction.

Corythoraptor is the seventh oviraptorosaur to be discovered in Ganzhou, a small city in one of the poorest parts of the country, alone.

Prof Lu said: “The discovery of Corythoraptor jacobsi provides unprecedented evidence oviraptorid dinosaurs were morphologically and taxonomically far more diverse in the Ganzhou area than in any other known region of the world.”