Ofqual was forced into downgrades by ‘implausible’ teacher predictions, it says. 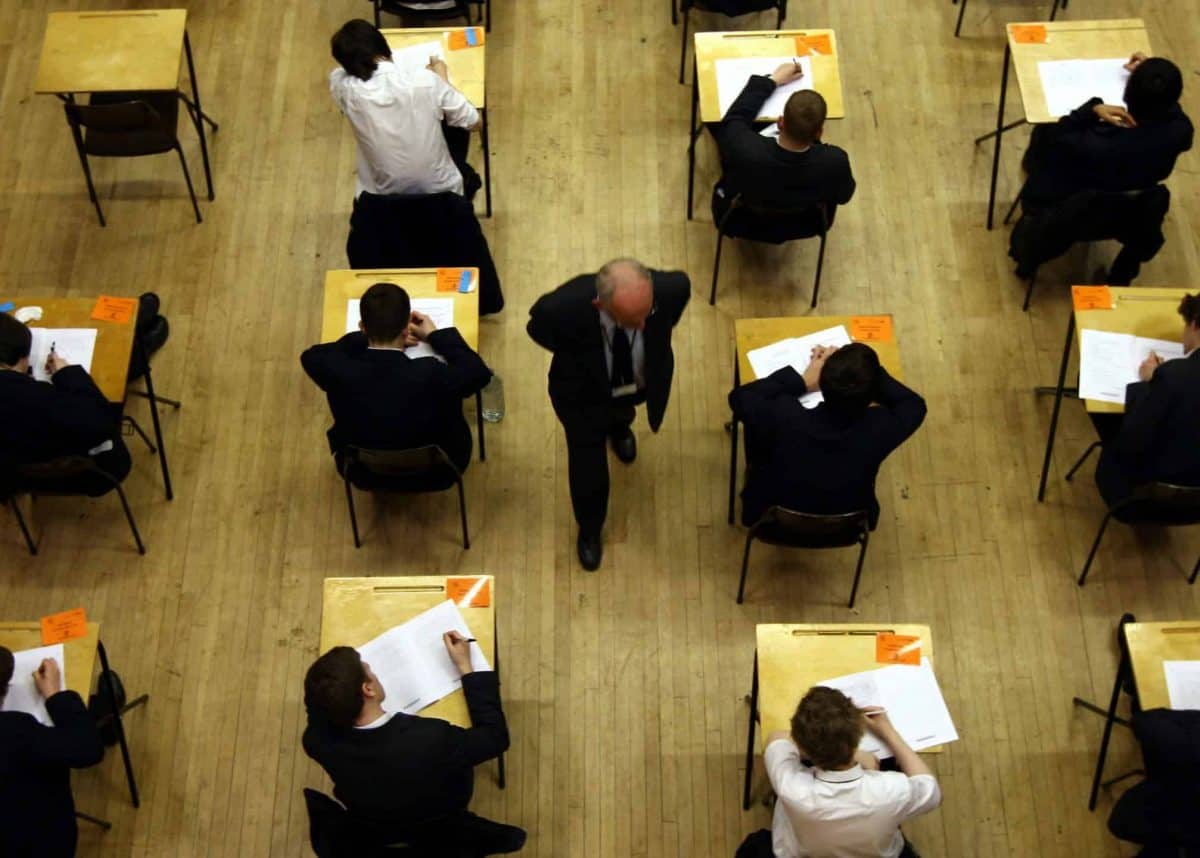 A-level results day descended in chaos as 39.1 per cent of teachers’ estimates for pupils in England were adjusted down by one grade or more, according to data from the Office of Qualifications and Examinations Regulation (Ofqual).

Gather round in pubs, side by side, to lambast them. Enjoy cheap food and wash it down with cheaper lager. Exams were just too dangerous but lampooning public servants over a warm pint is no bother. Forget the kids.

The Government is coming under increasing pressure to review its moderation and appeals system, with pupils complaining they have been let down, and experts warning poorer students will be affected most due to reassessments which consider schools’ past performances.

A protest by students, parents and teachers is planned for Downing Street on Friday morning, while at least one student is reportedly threatening legal action against Ofqual.

But Ofqual said it had been forced into the downgrades by inaccurate predictions by many teachers, although the vast majority had submitted accurate estimates.

Disrepectful, crass and desperately insecure @GavinWilliamson A lesson in how not to treat students and the professionals we entrust with their futures. pic.twitter.com/50amQkSimu

“Because there was no opportunity to develop a common approach to grading, the standard applied by different schools and colleges varies greatly,” an Ofqual spokesman told The Daily Telegraph.

“A rare few centres put in implausibly high judgments, including one which submitted all A* and A grades for students in two subjects, where previously there had been normal distribution.”

While the proportion of students with A-level grade reductions was largest among those from the most deprived backgrounds, the regulator has insisted there was no evidence of systemic bias.

Schools and colleges were told to submit the grades they thought each student would have received if they had sat the papers, alongside a rank order of students.

“A great deal of volatility”

Exam boards moderated these centre-assessment grades to ensure this year’s results were not significantly higher than previous years, and the value of students’ grades were not undermined.

After standardisation, the proportion of A-level entries awarded top grades still rose to an all-time high, with 27.9 per cent securing an A or above this year, figures for England, Wales and Northern Ireland show.

But school leaders warned of a “great deal of volatility” in results at individual centres, with some colleges reporting more than half of their grades had been adjusted downwards after moderation.

Overall, in England a total of 35.6 per cent of grades were adjusted down by one grade, 3.3 per cent were brought down by two grades and 0.2 per cent came down by three grades, figures show.

Some 85 per cent of candidates classed as having a “low” socio-economic status by Ofqual had been predicted to achieve a C and above by their schools.

But this fell to 74.6 per cent once final grades were calculated under this year’s new moderation process.

By contrast, the proportion of students from the least deprived backgrounds, or “high” socio-economic status, awarded a C and above fell by 8.3 percentage points during the process, from 89.3 per cent to 81.0 per cent.

Ministers are now facing calls to urgently review the moderation process in England and to make sure schools and colleges do not face financial barriers when lodging appeals for students.

David Hughes, chief executive of the Association of Colleges, who has written to Education Secretary Gavin Williamson, is concerned the process may have disadvantaged larger centres – such as colleges.

Geoff Barton, general secretary of the Association of School and College Leaders, called on the Government and Ofqual to review the moderation process in England “as a matter of urgency”.

A threat of legal action has been made by Curtiss Parfitt-Ford, an A-level student at a comprehensive school in west London, according to The Guardian. Supported by Foxglove, a non-profit organisation that campaigns against the misuse of digital technology, the student has demanded Ofqual corrects defects in the algorithm used to reassess grades, or be taken to court, the paper said.

Education unions – including the National Union of Students – have called on the Government to follow Scotland’s lead and scrap moderated exam grades and use teachers’ original predicted grades instead.

On Tuesday, Scotland’s Education Secretary said lowered marks would be reverted back to teachers’ estimates following an outcry from students and parents.

The Government announced late on Tuesday students in England would have the “safety net” of being able to use mock exam results as the basis for an appeal if they are higher than the calculated grade.

Labour leader Sir Keir Starmer has called for all fees for A-level appeals to be waived in response to thousands of pupils having their results downgraded.

The Welsh Government has already announced there will be no fees for appeals there, but the Department for Education said appeal fees were a matter for individual exam boards in England, adding there was no charge if an appeal is upheld.

Sir Keir also urged the Government to consider the sort of grading U-turn made by the Scottish Government this week.

He said: “The unprecedented and chaotic circumstances created by the UK Government’s mishandling of education during recent months mean that a return to teacher assessments is now the best option available.

“No young person should be at a detriment due to Government incompetence.

“Time is running out. We need action in days, not weeks.”

“You’ve got to have a system that has checks and balances, that looks at the whole performance and making sure you maintain standards within the exam system, to ensure those results carry credibility.”