Father of two Harri Patel, 63, said noise "not too bad" despite being airports closest neighbour for 23 years

A homeowner who has a ringside seat watching aircraft roar down the runway from his kitchen window said the noise is not so bad.

Harri Patel, 63, became Heathrow Airport’s closest neighbour when he and his young family decided to trade in their two bedroom house in the suburbs for one on the airport’s perimeter 23 years ago.

And he does not mind his noisy neighbour despite a constant steam of airliners including Jumbo jets landing or taking off throughout the day.

He said: “I love this house. There is nothing difficult about living here.”

The father of two and wife Josh, 60, fell in love with the end-of-terrace house just 300 yards from Heathrow’s Terminal Four as it was big enough for his growing family.

He said: “I wanted a larger property. We had a two bedroom house in Harrow and my son and daughter needed to have separate rooms so we decided to upsize.

“As soon as we opened the porch door, we entered straight into the living room and there was so much space. 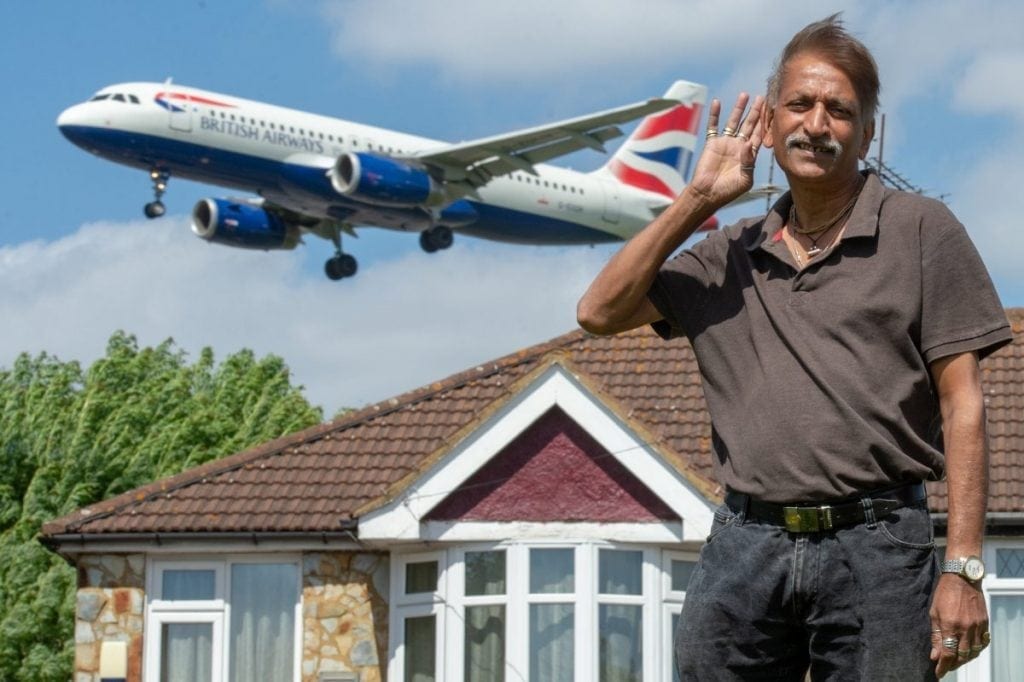 Harri said: “The kids liked to play in the open fields next to my house.

“I could see them from my kitchen window where you can also see the planes queuing up on the runway.

“We can see the whole runway from my daughter’s bedroom.”

Harri added: “When we moved in, it was already double glazed and then the airport put in secondary glazing.

“The noise doesn’t bother us, we are used to it.

“You don’t hear anything when all the windows and doors are shut.

“I can see the planes on the runway and it’s absolutely quiet.

“Sometimes when the larger aircrafts take off, you can feel the vibrations.

“When the planes take off at 10.30pm you can hear it if the windows are open, but when they are coming in to land it is very quiet. It’s not too bad.”

Josh works at Gordon Ramsey’s airport restaurant in Terminal Five while Harri commutes to his job as a paint manufacturer at ColArt in Harrow.

And he is not worried about a third runway in nearby Sipson.

He added: “I don’t think it’s going to affect us as we are on the other side, a good six to seven miles away.

“Hopefully the residents of Sipson will get double the value of their properties if they are uprooted and have to move.”