Access to any nursery rhyme or kids’ TV favourite characters with a quick search on YouTube or its safe child-friendly YouTube Kids platform is a boon to busy parents who want something safe for young children to watch. But ‘Elsagate’ is a sinister phenomenon that has surfaced – and all parents need to know about […]

Access to any nursery rhyme or kids’ TV favourite characters with a quick search on YouTube or its safe child-friendly YouTube Kids platform is a boon to busy parents who want something safe for young children to watch.

But ‘Elsagate’ is a sinister phenomenon that has surfaced – and all parents need to know about how children’s favourites are being subverted to bombard impressional youngsters with creepy content.

The scandal is nicknamed after the character from Disney’s family favourite animation Frozen. Yet typing “Elsa” into YouTube soon leads to videos involving all kinds of bizarre acts. 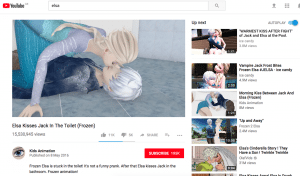 For a while now there have been threads on Reddit discussing this disgusting phenomenon. Adults are making subversive content using pre-school and primary school children’s favourite characters and memes.

This content can involve these characters acting out inappropriate / creepy / violent behaviour or even extreme pornographic acts. 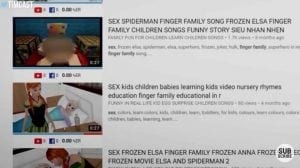 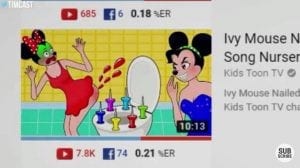 Below is a link to a Reddit thread which details many of the channels with such extreme content masquerading as safe children’s themes.

Today YouTube finally announced that it would deal with the vast proliferation of such content, perhaps fuelled by the sheer amount of pirated children’s character content being uploaded to YouTube to get channels mega-hits from children’s common global searches.

The platform vowed to flag any such content with an over 18 rating which stops it being automatically pulled into the Youtube Kids app.

In a statement YouTube insisted that less than .005% of videos viewed on YouTube Kids were removed for being inappropriate over the past 30 days.

“Earlier this year, we updated our policies to make content featuring inappropriate use of family entertainment characters ineligible for monetization,” said Juniper Downs, YouTube director of policy. “The YouTube team is made up of parents who are committed to improving our apps and getting this right.”

But Something is Wrong on the Internet – a post on Medium by writer James Bridle has gone viral as he explained: “What we’re talking about is very young children, effectively from birth, being deliberately targeted with content which will traumatise and disturb them, via networks which are extremely vulnerable to exactly this form of abuse.”

“YouTube and Google are complicit in that system. The architecture they have built to extract the maximum revenue from online video is being hacked by persons unknown to abuse children, perhaps not even deliberately, but at a massive scale. I believe they have an absolute responsibility to deal with this, just as they have a responsibility to deal with the radicalisation of (mostly) young (mostly) men via extremist videos — of any political persuasion. They have so far showed absolutely no inclination to do this, which is in itself despicable.”