"But isn’t that what the Daily Express wants? This no-deal Brexit stuff is starting to look like a bluff gone wrong." 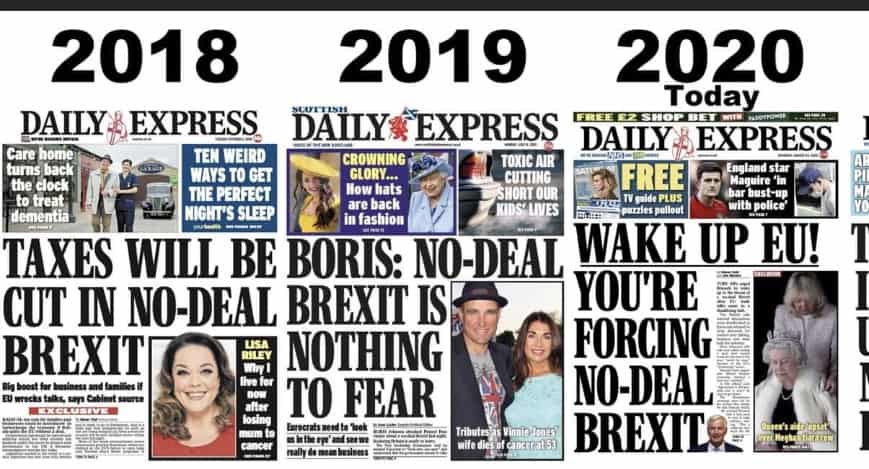 It may come as a surprise to many but the Daily Express has claimed , on its front page, that the EU is forcing a No deal Brexit. Their splash today is in direct conflict with EU negotiator Michel Barnier who warned agreeing a deal before the deadline currently “seems unlikely”, as he suggested it was Britain “wasting valuable time”.

In response to the Express headline the Daily Telegraph’s Michael Deacon Tweeted: “It was bad enough when the EU forced us to hold a referendum, ordered us to vote Leave and made us refuse to request an extension. But this time they’ve gone too far.”

The fire aimed at the EU in the Express was prompted by the end of five days of talks in Brussels in the seventh round of the marathon negotiations that broke up with both sides blaming the other for the lack of progress towards a deal.

Progress appears to be “frozen” as both sides refuse to back down on the key issues of fisheries and state aid.

Former Tory leader Iain Duncan Smith has said that Brussels has most to lose if the talks collapse.

Smith said: “This is a wake-up moment for the EU.

“We became a sovereign country earlier this year and the EU needs to start treating us like one. If they don’t want to, then so be it.

“The EU sells more goods and agricultural products to the UK than we sell to them. If they don’t want a deal, the cost will be on their heads.

“We are negotiating trade deals with countries around the world while the EU stews in its own bullying, bureaucratic juices.”

Shadow chancellor of the Duchy of Lancaster Rachel Reeves urged Boris Johnson to “get a grip” and “rapidly accelerate talks” when he returns from his holiday in Scotland, with the disruption of a disorderly exit threatening to compound the economic fallout of coronavirus.

On social media their was a sense of despair at the newspaper’s front page.

Dr Mike Gaslworthy Tweeted; “But isn’t that what the Daily Express wants? This no-deal Brexit stuff is starting to look like a bluff gone wrong.”