Here is an obscene fact for you: Bitcoin uses more electricity than 159 of the planet’s countries. The cryptocurrency worth under $1 in 2011 hit a new record this week, making headlines as it soared above $11,000 on Wednesday morning, after which its value has been going up and down like a rollercoaster.   But […]

Here is an obscene fact for you: Bitcoin uses more electricity than 159 of the planet’s countries.

The cryptocurrency worth under $1 in 2011 hit a new record this week, making headlines as it soared above $11,000 on Wednesday morning, after which its value has been going up and down like a rollercoaster.

But the other record that Bitcoin is breaking is as the world’s most obscenely energy-guzzling currency.

Bitcoin is the world’s first payment network that’s completely decentralized, it’s a peer-to-peer network that maintains a shared transaction ledger called the blockchain. The only problem is at the current rate of growth and energy consumption, with current technology in the next few years it would have to consume all the electricity in the world.

Bitcoin already consumes more electricity than all but three of the 54 countries in Africa. Many countries where refrigeration is a luxury consume less energy.

To sustain the favoured currency of the world’s black market in pretty much everything, as well as a bubble for rich investors keen to be part of the cryptocurrency goldrush, costs 0.13% of the world’s energy consumption.

If Bitcoin were a country, it would be the 61st highest electricity user on Earth. As this map by  PowerCompare shows, the currency is currently guzzling more electricity than 159 of the world’s individual nations:

The surge in price of Bitcoin has made headlines around the world. But as Ian Wright who extrapolated the above map points out: “most the coverage has missed out one of the more interesting and unintended consequences of this price increase. That is the surge in global electricity consumption used to “mine” more Bitcoins.”

BBC Business News this week led with a feature covering the gold rush which has seen bitcoin shoot from $1,000 at the start of the year to $11,000 now. Although no one is sure quite what’s driving it, it has created mass hysteria amongst investors who are flocking to bitcoin for fear of missing out.

But according to MarketWatch there is more than an 80% chance that bitcoin will soon crash. And JP Morgan’s top quant strategist recently warned that the cryptocurrency is a “pyramid scheme.”

As well as being unregulated, volatile and difficult to value, warned Marko Kolanovic, the bank’s global head of quantitative and derivatives strategy, “another worrying aspect of cryptocurrencies are some parallels to fraudulent pyramid schemes.”

Bitcoins needs to be mined, or discovered, using banks of energy-guzzling computers to solve problems. The currency was made possible due to the development of “blockchains.”

A blockchain is a list of transactions maintained by a community of users, rather than a central authority. It’s called a blockchain because new transactions are bundled into “blocks” of data and written onto the end of a “chain” of existing blocks describing all prior transactions. But writing new blocks, called mining, consumes a lot of energy, and with a gold rush to mine new Bitcoins, the amount of energy guzzled is becoming more and more obscene. 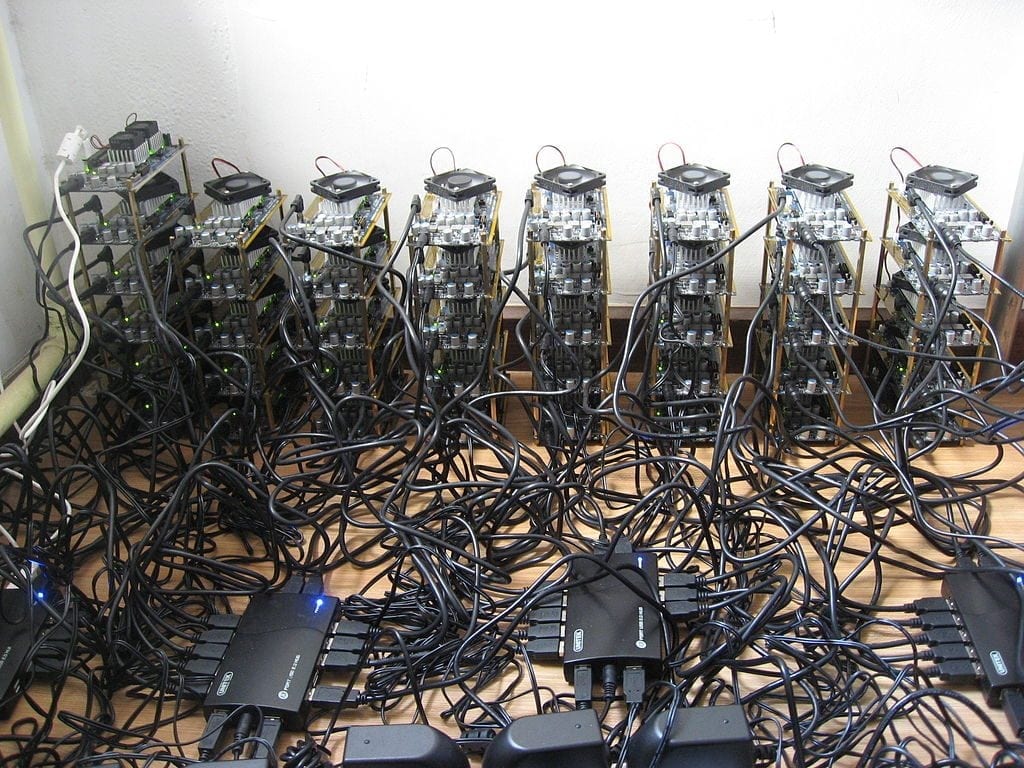 “It is believed that an unknown person (or persons) known as ‘Satoshi Nakamoto’, before disappearing, mined the first 1-2 million coins or about 10 percent of the coins that will ever exist,” Kolanovic explained. But the problem with the scheme isn’t its murky origins, but as he eluded, the fact that “mining becomes progressively more difficult, and eventually unprofitable.”

According to the Bitcoin Energy Consumption Index (BECI) maintained by Digiconomist every individual Bitcoin transaction eats up 275 kWh of electricity, and the latest estimate of Bitcoin’s total annual energy consumption is in the vicinity of 29.05 TWh. – Bitcoin mining is now using more electricity than 159 individual countries (as you can see from the map above). More than Scotland, Wales, Ireland or Nigeria.

According to Harald Vranken a computer scientist at Radboud University, in Nijmegen, Netherlands, doing today’s calculations would “consume way more power than is generated on the entire planet” if it were done using the CPUs available when Bitcoin launched in 2009. The problem is the leaps in energy efficiency of computer chips can’t keep up with the greedy thirst of Bitcoin miners.