Nigel Farage has revealed the Tories offered him a peerage twice to avoid the Brexit Party running against their election candidates. 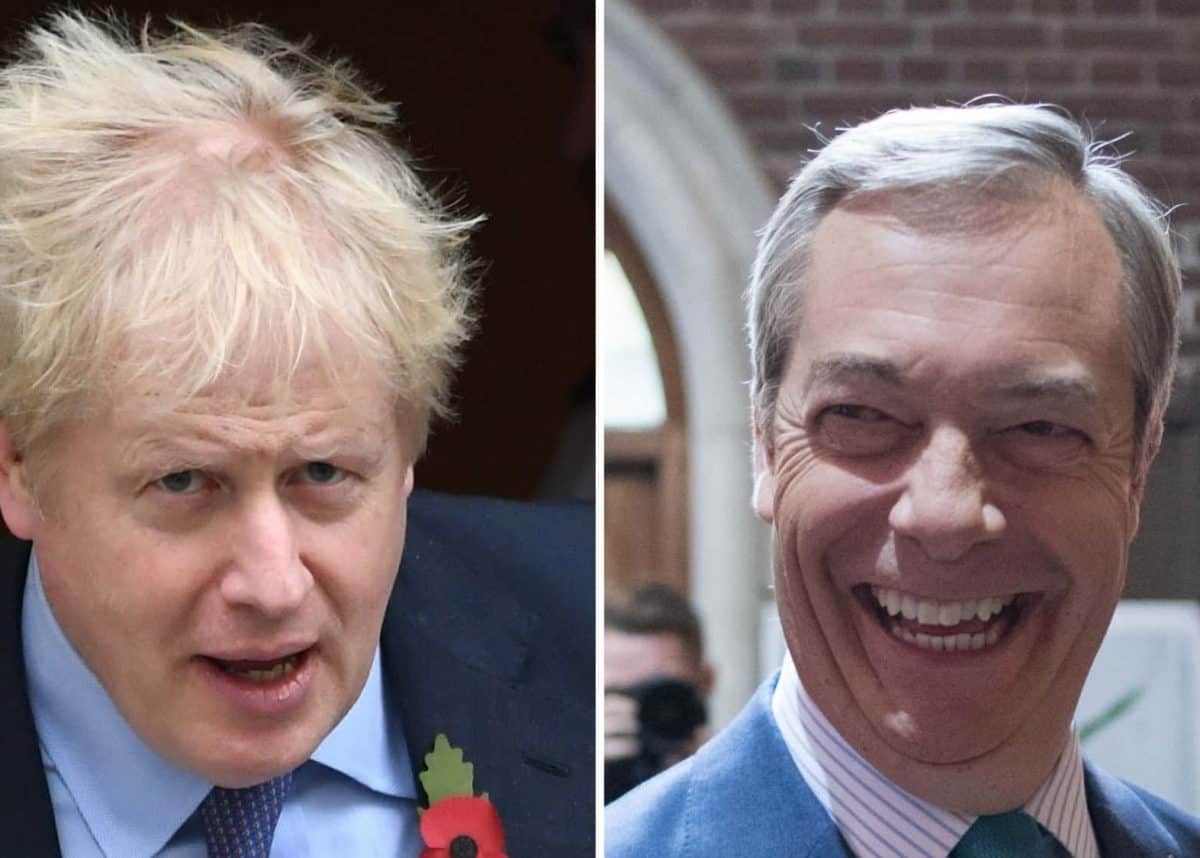 Nigel Farage is set to unveil his threat to the Tories when he reveals the 600 candidates who could split the Leave vote and scupper Boris Johnson’s chances of electoral victory.

The Brexit Party leader has tried and failed to get a hardline Brexit alliance with the Prime Minister, even despite garnering the blessing of their mutual ally Donald Trump for the move.

Yet speaking about Boris Johnson’s Brexit deal on the weekend, Nigel Farage again derided it as the worst of all worlds, comparing it to a piece of smelly cheese that doesn’t stand up to scrutiny.

“When you get it out of the fridge, it’s really appetising and delicious for a few days, but after a couple of weeks it stinks and is inedible,” said the Brexit Party leader.

Farage, who demands leaving the EU without a deal, refused to back Boris Johnson’s “pointless” deal, saying “it does not work at any level, it is a gigantic con” and “virtually worse than staying where we are.”

While ruling out running as an MP himself an eighth time, after failing to be elected seven times now, Nigel Farage will at an event in Westminster on Monday introduce the hopefuls to challenge seats across the nation during the December 12 vote.

However Tory ERG Brexiteer Jacob Rees-Mogg insisted Johnson’s deal was a “complete Brexit” and that Nigel Farage should recognise the time had come to “retire from the field”.

“I think he would be well-advised to recognise that that battle he won. He should be really proud of his political career,” he told LBC radio. “It would be a great shame if he carries on fighting after he has already won to snatch defeat from the jaws of victory.

Farage also came under fire from Steve Baker, the leader of the pro-Brexit Tory European Research Group, who warned he risked another hung parliament through “dogmatically pursuing purity”.

“That’s the irony of Nigel Farage. He risks being the man who hands Boris a weak and indecisive Parliament, and bringing about, therefore, his own worst fears,” Mr Baker told the Telegraph.

Farage vows to hurt Labour in ‘the most extraordinary way’

However, the Brexit Party and former Ukip leader said that his “number one target” would be Labour Leave voters.

“I led Ukip into the 2015 general election. I had all the same stuff, all the same arguments. The Tory tribe screaming and shouting, ‘Don’t take our votes’,” he told ITV’s Good Morning Britain on Monday.

“The Ukip vote took more votes from Labour than it did from the Conservatives, (David) Cameron wouldn’t have even got a majority without Ukip.

The unveiling comes after the PM apologised to the Tory members who elected him leader for failing on his “do-or-die” promise to implement Brexit by Halloween.

Boris Johnson said he feels “deep regret” over missing the former deadline, which he was compelled to extend to the end of January.

So adamant was the PM that he would meet the last Brexit deadline, he said he would rather be “dead in a ditch” than miss it. That date passed on Thursday.

In an interview with Sky’s Ridge on Sunday, he was told he needed to take responsibility and could not just blame other people.

“Well, I do. I do and I’m deeply, deeply disappointed,” the PM replied.

Pushed on whether he would apologise to Tory members who supported him, Boris Johnson replied: “Of course, of course.

Boris Johnson claims a December Brexit is possible, despite the election he has called in December

Johnson also said he can see “no reason whatsoever” about why the UK should extend the Brexit transition period beyond December 2020, adding: “If you get the right Parliament anything’s possible.”

Nigel Farage and political figures across the spectrum scoffed at the impossible claim. Boris Johnson stopped MPs debating his Withdrawal Deal, insisting instead on an election in December.

Whether the Brexit Party succeeds in getting any MPs elected or not, Tories fear the party could play a major role in splitting the Leave vote.

The Conservatives have rejected his offer of an electoral pact, and Mr Farage on Sunday ruled out standing in a constituency himself.

He told the BBC’s Andrew Marr Show: “I’ve thought very hard about this – how do I serve the cause of Brexit best, because that’s what I’m doing this for.

In a move likely to rile the proponent of a no-deal departure, senior Treasury minister Rishi Sunak failed to deny suggestions the threat was being removed from the Tory manifesto.

On the opposite side of the Brexit spectrum, the Lib Dems were not ruling out forming a Remain electoral alliance in up to 60 seats to boost the chances of preventing a Conservative majority.

Talks have been under way between the unequivocally pro-EU parties of the Lib Dems, Plaid Cymru and the Greens to boost the chances of electing anti-Brexit MPs.

“I think it’s fair to say that in the vast majority of constituencies the party of Remain that is going to be best-placed to win that seat will be the Liberal Democrats.”