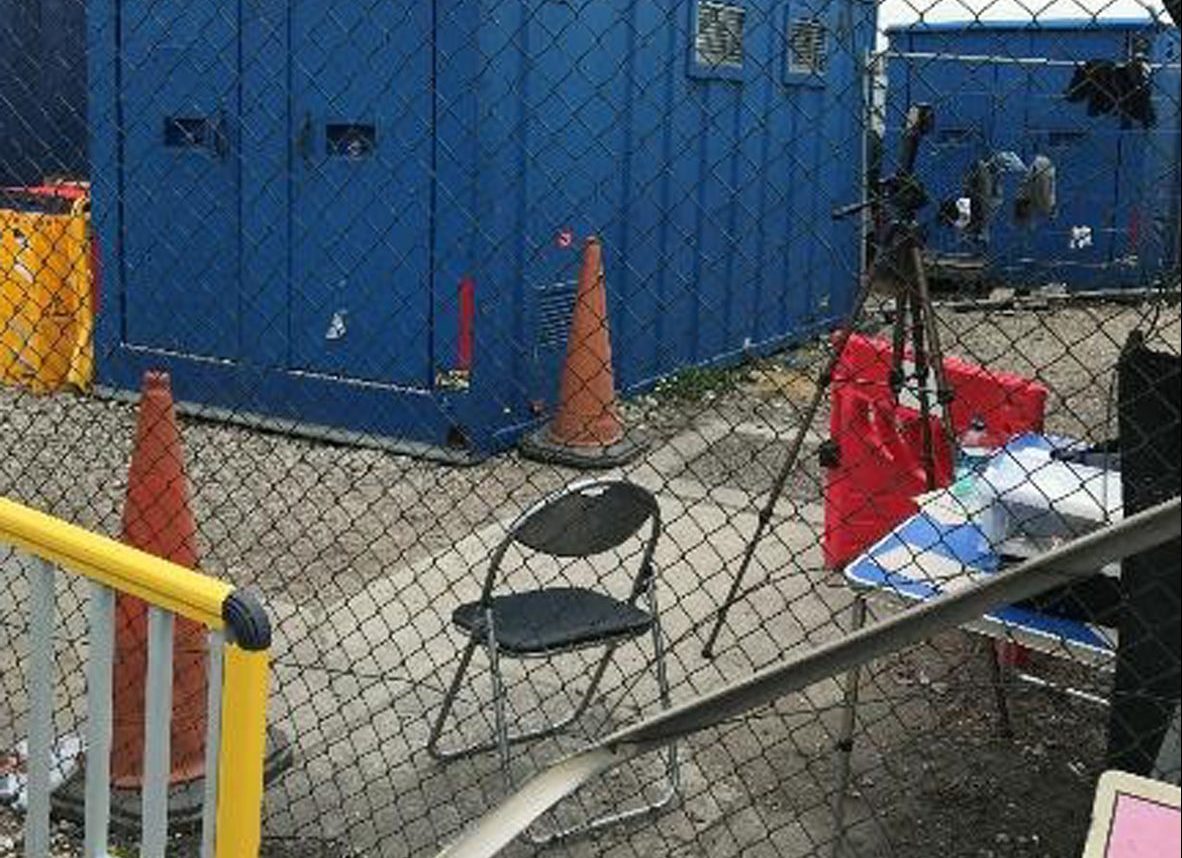 Undated handout photo issued by HM Inspectorate of Prisons (HMIP) of Tug Haven facility in Dover, Kent, where migrants are being processed, arriving soaking wet and freezing after crossing the English Channel.

Hundreds of cold, wet migrants were forced to spend hours huddled in cramped containers on a “rubble-strewn building site” after crossing the Channel to the UK on small boats, a shocking report has revealed.

Many were detained for days at a time with no sleeping facilities, showers or access to the open air. In one case, inspectors found, a 15-year-old boy was held for more than 66 hours without explanation.

Charities said the findings were “extremely disturbing” and show the “brutal reality of how refugee children are treated in Priti Patel’s Britain”.

More than 7,400 people have made the perilous crossing to the UK by boat this year, according to analysis by the PA news agency. When they first arrive in the UK, after either being picked up in the Channel or landing on beaches, they are taken to Tug Haven in Dover.

Peter Clarke, HM Chief Inspector of Prisons, said: “Detainees almost always arrived wet and cold, but then often had to spend hours in the open air or in cramped containers.

“Basic supplies, including dry clothing, ran out during the inspection and some detainees were placed on escort vehicles in wet clothes.”

The Tug Haven facility “resembled a rubble-strewn building site”, inspectors said. They also found that there was “nowhere suitable” to isolate people displaying symptoms of Covid-19.

Particular concerns were raised in relation to the treatment of children, many of whom were arriving on UK shores on their own. In one case, a child was mistakenly taken to a detention centre for adults.

Some very young children in family groups were also held for far too long, inspectors said.

While numbers of migrants crossing to the UK in small boats have increased in 2020, Clarke lashed out at a failure by the Home Office to plan “for what must have been a predictable increase”.

He said: “Just because numbers are unprecedented, that does not mean they are unpredictable, or cannot be planned for”.

Migrant charity worker Bridget Chapman, of Kent Refugee Action Network, said: “This is an extremely disturbing report which sadly confirms our worst fears about the conditions into which vulnerable and often traumatised people are being placed in once they arrive in the UK.

“This report doesn’t simply list one or two small issues; it is a litany of serious problems from people being transported in wet clothes, to being kept in inappropriate facilities with nowhere to sleep for more than two days.”

“This report reveals the brutal reality of how refugee children are treated in Priti Patel’s Britain. HMIP makes it absolutely clear that this is not a result of a rise in numbers, it is a result of her lack of care and action.”

A Home Office spokesperson said: “We take the welfare of people in our care extremely seriously. We are fully adhering to our statutory duties to ensure our facilities are decent and humane.

“We have also improved both our facilities and the way we deal with arrivals in response to the unprecedented rise in small boat crossings. These crossings are dangerous, illegally-facilitated and unnecessary.

“We are committed to fixing the asylum system, to make it fairer and firmer, compassionate to those who need help and welcoming people through safe and legal routes.”

Related: ‘Glimmer of hope’: Local businesses back Rashford – when Tory MPs would not