The Archbishop of Westminster became the first cardinal in British history to testify under oath as he was questioned by the counsel for the Independent Inquiry into Child Sexual Abuse (IICSA) today at a hearing in central London. The investigation into how institutions in England and Wales handled their duty of care to protect children […] 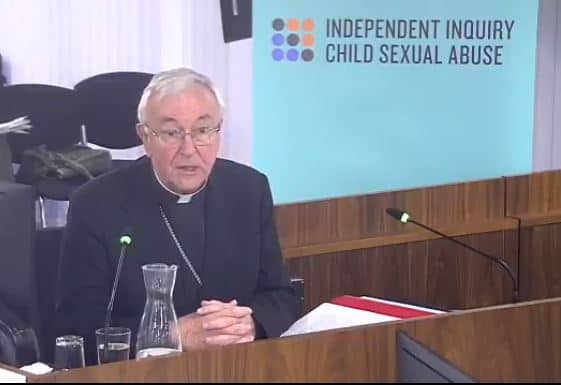 The Archbishop of Westminster became the first cardinal in British history to testify under oath as he was questioned by the counsel for the Independent Inquiry into Child Sexual Abuse (IICSA) today at a hearing in central London.

The investigation into how institutions in England and Wales handled their duty of care to protect children from sexual abuse, called the highest Catholic clergyman in the country to answer awkward questions on the Roman Catholic church’s responses to major concerns safeguarding children and how they reacted to their claims of sexual abuse.

He also faced questions from the inquiry about his time as Archbishop of Birmingham, and the handling of allegations of abuse by four priests, including the now dead Father John Tolkien, the son of Lord of the Rings author J. R. R. Tolkien.

“There is more attention, rightly on this evil which has found a lodging within the Catholic Church,” said Cardinal Nichols, and he said the church would be reviewing its processes.

The cardinal promised that it would not be “window dressing” when the inquiry counsel questioned its timing – at the same time as the national Independent Inquiry into Child Sexual Abuse is revealing major lapses in the Catholic Church’s response to child sexual abuse.

Cardinal Nichols called the scandal a “cause of great sorrow and shame for me and for the Catholic Church.”

The inquiry heard evidence that the Roman Catholic Archdiocese of Birmingham was aware of allegations of child sexual abuse against Father John Tolkien, son of the famous fantasy writer, who was alleged to have made scouts strip naked in the 1950s, when he was based in Sparkhill, Birmingham.

Cardinal Nichols today said he did not recall ever meeting Christopher Carrie, who passed away this year, but was presented with the Church lawyer’s dossier on complaints into priests including Tolkien that he had seen as Archbishop of Birmingham between 2000 and 2009.

Lawyers hired by the Church detailed other complaints into Fr Tolkien and said Mr Carrie’s complaint if there had been a trial would be “likely to satisfy the court that Father Tolkien had abused him in the manner suggested.”

But the legal advice suggested that Mr Carrie’s claim for compensation from the Church for the psychiatric damage he had suffered and losses associated with that through his life could be fought if the Church chose to use the Statute of Limitations to fight the claim, as it was from events that had happened many years ago, as well as argie that Fr Tolkien was not acting in a Church role at the time of the abuse.

The inquiry counsel asked Cardinal Nichols’ views of how claims from alleged child sex abuse survivors are dealt with, in this case where “the Church’s own lawyers” argued that it sould liekly be found that “abuse had occured.”

“Is there at least a moral obligation to do the right thing by the victim and not defend the claim?” Cardinal Nichols was asked.

“Due process is very important and cannot simply be shortcut by moral conviction,” the cardinal replied.

The investigation revealed a document from around the time that Mr Carrie reported the abuse, written by Archbishop Maurice Couvede Murville that suggests that before Fr Tolkein died in 2003 he had admitted the abuse and may have been sent for treatment.

The document suggests the Archdiocese of Birmingham had been aware of abuse allegations as early as 1968 when a note had been written about allegations that Fr Tolkien had demanded boy scouts to strip naked, yet this incident had not been reported to the police either at the time.

The Archbishop of Westminster was Archbishop of Birmingham when Fr Tolkien was still allowed to practice, despite promises made to his victim.

When asked why he had been reticent to reveal such documents, he insisted that they were give to the police.

“Why is it that you did not want to disclose reference to the 1968 note?” he was asked.

“My main purpose I must admit, was to try and avoid civil action in the court,” Cardinal Nichols replied.

Fr Tolkien denied allegations against him but when further allegations emerged police eventually investigated. Yet the Crown Prosecution Service decided not to prosecute the priest after a medical assessment shortly before his death.

The IICSA is also investigated the response to the cases of priests Samuel Penney and James Robinson, both of whom were convicted and imprisoned for child sexual abuse; and one other priest, who has not been charged with a crime, and is not named by the inquiry.

“Those who instruct me take the view that the evidence so far presents a picture of the Church as a clear and present danger to children as it is structurally organised,” said Mr Jacobs, warning that the Church’s attempts to build effective mechanisms since the Nolan Report in 2001 are “clearly not working.”

The Archbishop of Westminster was also quizzed today about “tensions” between the different bodies in the Roman Catholic Church of England and Wales which were meant to safeguard children and react to reports of abuse.

Summing up today, Mr Jacobs said that Cardinal Nichols’ evidence showed that “the Church regards itself as a family” and so its first impetus is to protect its own.

“The main obstacle to the protection of children in the Catholic Church is its own structure,” he told the IICSA.

Mr Jacobs added that the Catholic Safeguarding Commission review that Cardinal Nichols mentioned was insufficient and demanded that the Church cede its safeguarding of children to an independent body or make major changes to its own Canonical Law.

He quoted the church’s Canonical Law under which it would be against the church’s legal system for “a Bishop to report a priest had abused children in his diocese” if that would damge the Church’s reputation, and insisted that such rules dictated by an “archaic” institution in another country could not protect children.