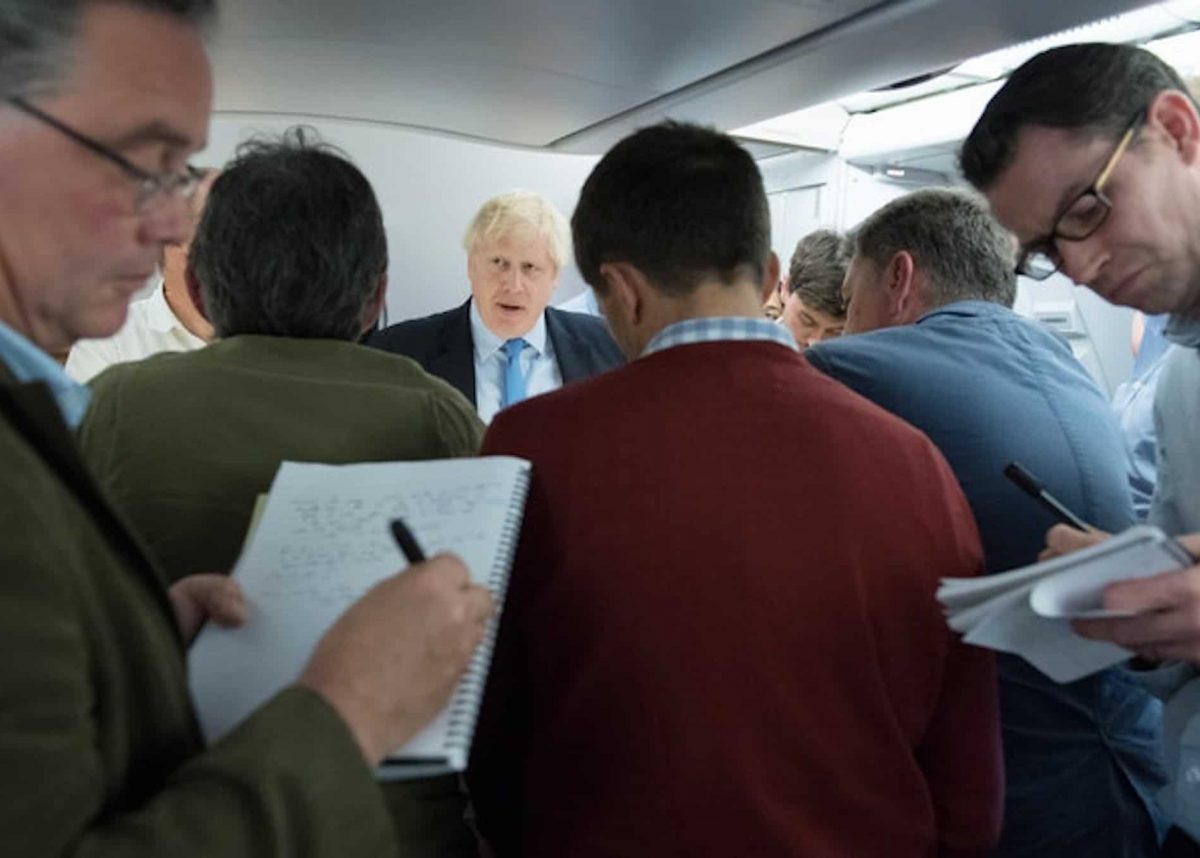 It can’t have had a worse start than Boris Johnson’s.

If the plot of Snakes On a Plane made you squirm, picture Boris’ flight last night.

Locked on a plane full of invited press, on what will certainly seemed like a rather long flight to New York for a UN climate summit, his (dubious – Johnson has one of the most climate sceptic governments ever assembled) green credentials unfortunately weren’t the talking point.

Instead Johnson – who has built a career on blustering through awkward questions – had his work cut out dodging questions about his relationship to American model-turned tech entrepreneur Jennifer Arcuri.

According a Sunday Times expose and further allegations in today’s Daily Mail, as London Mayor, Johnson spent a lot of time visiting her and taking her on tax-payer-funded visits jaunts abroad.

Harder to explain for Johnson, is why his equally reticent pal’s business received £10,000 in sponsorship from an organisation overseen by Mr Johnson as mayor in 2013, with no conflicts of interest declared by him.

On board his RAF Voyager the inevitable questions about whether he would refute the claims over Jennifer Arcuri came at Johnson hard and fast last night.

But the PM did not care to clarify the nature of his relationship with the woman whose Shoreditch home he reportedly used “afternoon breaks in his mayoral diary” to pop over to, while married to second wife Marina Wheeler, mother to four of his five children.

Asked bluntly whether he was in a sexual relationship with Ms Arcuri at the time she was receiving tax payer grants and privileged access to foreign trips, Johnson insisted: “I’m here exclusively to talk about what we are doing at the UN.”

“I’m here to talk about what we are doing in the UN and in tackling climate change and ensuring biodiversity and to serving as a bridge between our European and American friends when it comes to the Gulf and many other issues,” Johnson insisted when asked if he had improperly failed to declare his relationship with Ms Arcuri while she was enjoying taxpayer funded grants and official overseas missions under his control.

And asked whether there should be an official inquiry into his abuse of public funds, Johnson mumbled: “I’m here, as a I say, to talk about the trip.”

Johnson swerved six questions about his relationship with the young Californian businesswoman, and how she got her hands on £126,000 in public money and privileged access to three foreign trade missions led by him.

“That’s a lot of taxpayers’ money”

He was almost relieved to be quizzed about the government’s failure to save 22,000 jobs at Thomas Cook.

Brian Strutton, general secretary of the usually rather conservative British Airline Pilots’ Association, earlier slammed the Government for failing to act on its own review which followed the Monarch Airlines collapse. “This is a mess that could have been avoided,” he said. “Ministers need to step forward and take responsibility for the sake of passengers and staff.”

Shadow business secretary Rebecca Long-Bailey had joined calls for the Government to step in and save Britain’s longest-running travel agent: “The Government faces a simple choice between a £200 million Government cash injection to save the company now, versus a £600 million bill to repatriate UK holidaymakers.”

But Boris Johnson defended accusations he had failed to step in to save the tour operator’s whose collapse has left over 150,000 customers stranded.

“It is perfectly true that a request was made to the Government for a subvention of about £150 million,” the Prime Minister admitted.

Other ministers gave different figures for the sum requested by Thomas Cook, rising up to £250 million.

“There remains the question of repatriating 150,000 British holidaymakers and the cost to the public purse of doing so,” he said.

“You don’t have to be a mathematical genius to know it would have been cheaper and more cost effective to save what is a cornerstone of the British high street.”

Unite general secretary Len McCluskey said: “The Government’s ‘do nothing’ attitude has left workers and customers high and dry while landing taxpayers with a bill of hundreds of millions of pounds.”

But Transport Secretary Grant Shapps said the repatriation operation would cost £100 million, less than the sum requested by Thomas Cook.

“The Government is not in the business of running travel operators, he added. “What we judged… is that if we stepped in we were only a few weeks away from having to do this anyway.”

But shadow chancellor John McDonnell blamed the Tory Government’s “ideological bias” against state intervention for the decision not to intervene.

“The Government’s intervention could have enabled us to just stabilise the situation, give a breathing space so that there could be proper consultation with the workforce in particular about how to go forward,” he told the BBC.

“To just stand to one side and watch this number of jobs go and so many holidaymakers have their holiday ruined, I just don’t think that’s wise government.”

Union bosses also condemned the Government’s refusal to act, claiming that the cost of the exercise to bring stranded holidaymakers’ home would dwarf the amount of taxpayer support requested by the firm.

Boris Johnson must have been wondering if his RAF Voyager is equipped with parachutes.

What will happen to Thomas Cook staff and customers now?