A senior member of staff said workers are struggling so much on their current pay that some take the night bus to work because they cannot afford the tube. 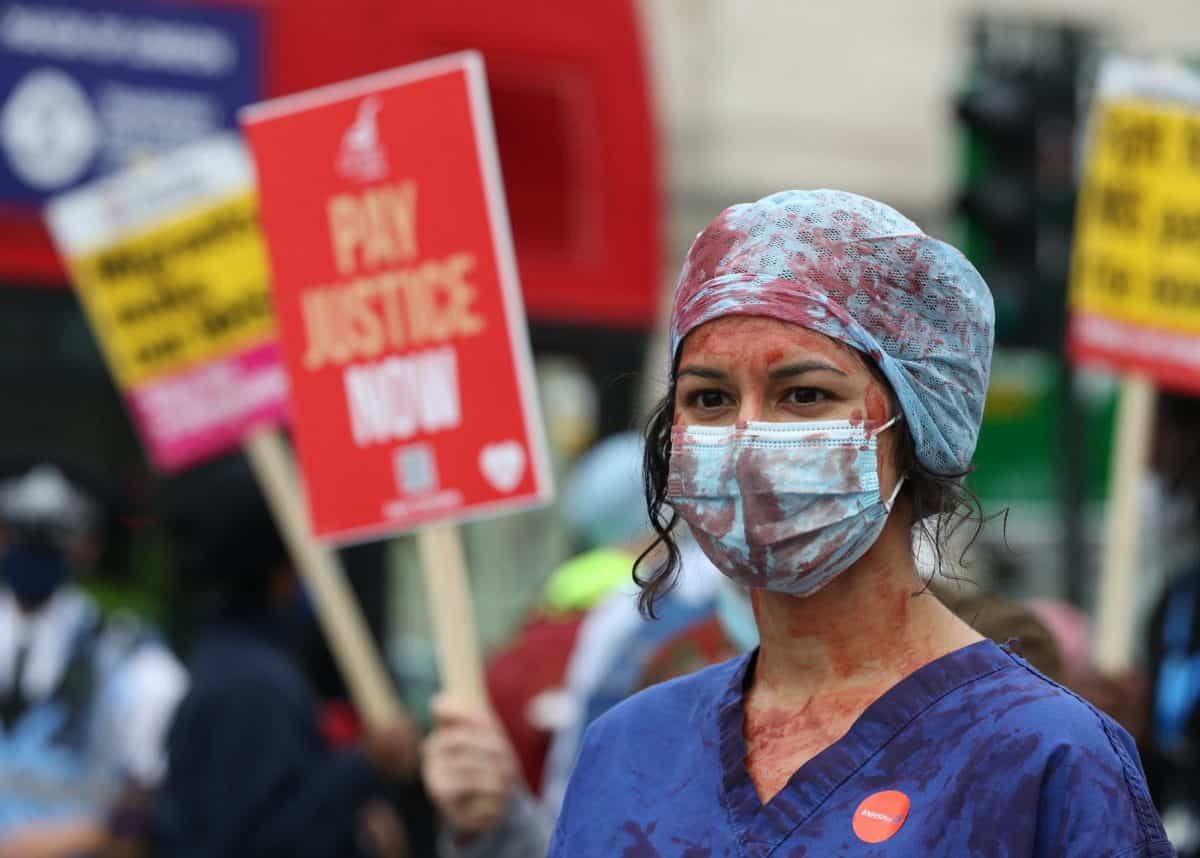 Boris Johnson has been branded a “joke” and a “hypocrite” by NHS workers demanding an immediate pay rise.

NHS staff, who have hinted at strike action, made their way to Whitehall on Wednesday evening carrying banners that said “Pay Justice Now” and “Stop clapping, start paying”.

A senior member of staff, who called the Prime Minister a “clown”, said workers are struggling so much on their current pay that some take the night bus to work because they cannot afford the tube.

Leading the march to Downing Street was Dave Carr, a 57-year-old critical care nurse at a major London teaching hospital.

He told the PA news agency that NHS workers are “fuming”, adding: “We can’t do our jobs properly because of the shortages there are in nursing staff and all grades of staff within the NHS.

“My pay has been eroded by about 20 per cent over the last 10 years.

“I earn more or less the same as I earned 10 years ago.

“I’m a senior, senior nurse in critical care and I’m finding it difficult to survive.

“If you’re looking at young nurses or young health workers with families it’s even doubly difficult.

“But if you’re looking at our ancillary staff – our porters, our cleaners – who are on the demonstration, it’s almost impossible for people to live.

“We’ve got staff that come to work on the night bus because they can’t afford the tube.

“It’s that bad inside the NHS at the moment.”

“It’s that bad inside the NHS at the moment”

Mr Carr, from Hackney, said the coronavirus pandemic has exposed “the whole mess” that the NHS is in.

Asked what he would say to the Prime Minister if he had a chance, he said: “I’d say to him you’re a hypocrite.

“You gave it large about the nurses that looked after you, you praised them, you mentioned them by name, you said what wonderful care you had.”

Asked what he thinks of Health Secretary Matt Hancock, Mr Carr, who has worked in the NHS for 38 years, said: “I think that the way that the whole pandemic has been handled in terms of the lack of speed of lockdown and the farce, and continued farce, over PPE, has been an absolute disgrace in a country this rich and this developed.

“We in the NHS did absolutely everything that we could to make sure that the patients in front of us got the best possible care there was and I’m really proud of what I did during that.

“But I’m not proud of how the Government handled the pandemic.”