BREAKING NEWS: Boris Johnson’s resignation letter warns that the Government’s course will leave Britain as a colony of the EU with no say over policies in a semi – Brexit. Johnson wrote that the compromise that Theresa May had claimed her cabinet had assented to less than 48 hours before her cabinet was rocked by […]

BREAKING NEWS: Boris Johnson’s resignation letter warns that the Government’s course will leave Britain as a colony of the EU with no say over policies in a semi – Brexit.

Johnson wrote that the compromise that Theresa May had claimed her cabinet had assented to less than 48 hours before her cabinet was rocked by three resignations, leaves Britain with the “status of a colony.”

He claimed that the Brexit deal Theresa May is seeking to avoided crossing any of her red lines about membership of the Single Market, Customs Union and immigration while at the same time not jeopardising the peace and livelihood of Northern Ireland with a hard border would be a “semi-Brexit.”

Britain would be “locked in the EU system, but with no UK control over that system”.

Johnson complained that the “dream is dying, suffocated by needless self-doubt”.

After the Chequers summit in which Theresa May had said she had got the assent of her colleagues, it emerged that Johnson had referred to May’s Brexit plan as “polishing a turd”.

But Johnson had stayed silent until this evening while colleagues at the Department for Exiting the European Union resigned one by one.

Tory insiders said that Johnson had initially tried to persuade Brexit minister David Davis not to resign before changing tack and trying to co-ordinate a resignation with him behind the scenes.

Both have been rivals for the Tory party leadership which is looking shaky for Theresa May who has lost seven cabinet members so far as PM.

Earlier today the Prime Minister faced down her worried MPs her at a packed meeting of backbench Conservative MPs.

The head of the influential 1922 Committee has said that so far he has not received enough letters from MPs asking for a Tory leadership contest.

But soon after Theresa May’s meetings with her MPs ministerial aide Chris Green resigned his position as a parliamentary private secretary to the Department for Transport, insisting in a letter to the PM that she had confirmed his fears that “we would not really leave the EU” under her leadership.

This is Boris Johnson’s resignation letter in full:

It is more than two years since the British people voted to leave the European Union on an unambiguous and categorical promise that if they did so they would be taking back control of their democracy.

Brexit should be about opportunity and hope. It should be a chance to do things differently, to be more nimble and dynamic, and to maximise the particular advantages of the UK as an open, outward-looking global economy.

That dream is dying, suffocated by needless self-doubt.

We have postponed crucial decisions – including the preparations for no deal, as I argued in my letter to you of last November – with the result that we appear to be heading for a semi-Brexit, with large parts of the economy still locked in the EU system, but with no UK control over that system.

It now seems that the opening bid of our negotiations involves accepting that we are not actually going to be able to make our own laws. Indeed we seem to have gone backwards since the last Chequers meeting in February, when I described my frustrations, as Mayor of London, in trying to protect cyclists from juggernauts. We had wanted to lower the cabin windows to improve visibility; and even though such designs were already on the market, and even though there had been a horriﬁc spate of deaths, mainly of female cyclists, we were told that we had to wait for the EU to legislate on the matter. 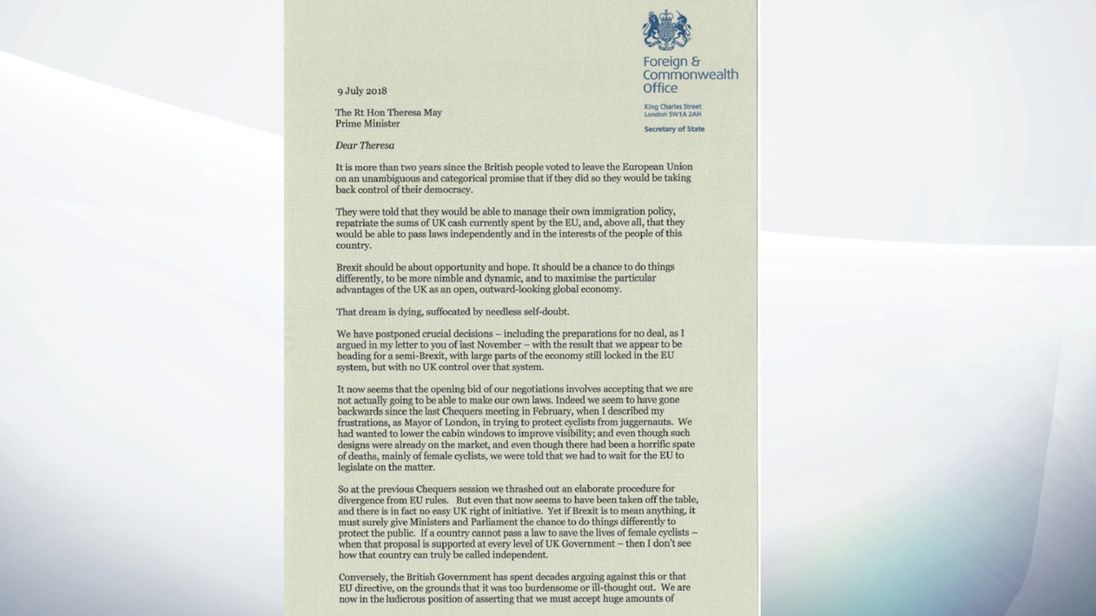