At least 75 ASDA stores could close in merger with Sainsbury’s, according to new analysis. The recently-announced merger will create Britain’s biggest supermarket chain, but regulators could be looking to see how many Asda stores are in close proximity to Sainsbury’s before giving it the go-ahead. Early research has revealed that while almost half Asda stores […]

At least 75 ASDA stores could close in merger with Sainsbury’s, according to new analysis.

The recently-announced merger will create Britain’s biggest supermarket chain, but regulators could be looking to see how many Asda stores are in close proximity to Sainsbury’s before giving it the go-ahead.

Early research has revealed that while almost half Asda stores had a Sainsbury’s in the same postal district (the first half of the postcode, known as the ‘outcode’), many of these were Sainsbury’s Local stores, which arguably could be excluded as they serve a different shopper mission.

Taking these out leaves 197 Asda stores, however this is not definitive as stores in different postcodes can be geographically very close, and some stores in the same postcode district could, feasibly, be far away enough not to be considered competitors.

Looking at it by the smaller postcode sector (the first half of the postcode plus the first digit of the second half), 75 Asda stores have a Sainsbury’s (excluding Locals) in the same sector.

It is thought these 75 stores would be the absolute minimum that the CMA will want disposed of. 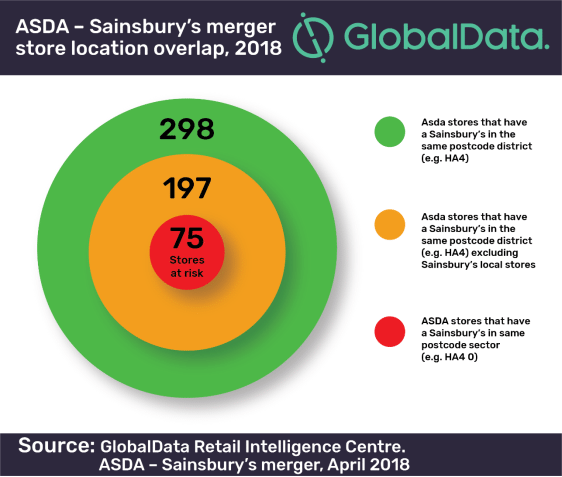 Patrick O’Brien, UK Retail Research Director at GlobalData, said: “Overall, we see this as a defensive merger, as a way of halting the long term decline in profit margins both have suffered.

“Aldi and Lidl continue to take market share, and Asda and Sainsbury’s may believe that by combining to become the largest UK food retailer, it can battle more effectively against them with greater buying scale.

“We can see why this deal would be attractive to Asda as their low price stance has been undermined by the discounters, and it has been unable to position its brand or customer experience as offering more than the discounters, in the way that Tesco and Morrisons have been able to do, as they never traded on being the cheapest.

“However, I don’t think we should get carried away with Asda Sainsbury’s talk of price cuts. The wording of the statement makes it clear that it will aim to reduce prices on some products – its less a commitment to a price war than an attempt to convince that Competition and Markets Authority (CMA) that the deal is good for competition.

“Sainsbury’s has largely succeeded with its acquisition of Argos so far, but to take on an even more challenging integration so soon after looks risky.

“We believe that fighting the increasing challenge of the discounters will require more than just cost cutting and increasing buying scale. Tesco was reported in February to have been planning a cut price fascia to go head to head with the discounters, Sainsbury’s may be considering using the Asda fascia to play a similar role, though this would have to involve pushing the brand much further into more convenient locations”.