As the scale of the winter crisis facing the NHS – a crisis the Government was repeatedly warned about – became increasingly apparent today, the Prime Minister and Health Secretary veered from one car crash interview to another. On Wednesday Theresa May flatly denied there was any “crisis”, insisting “the NHS has been better prepared for […] 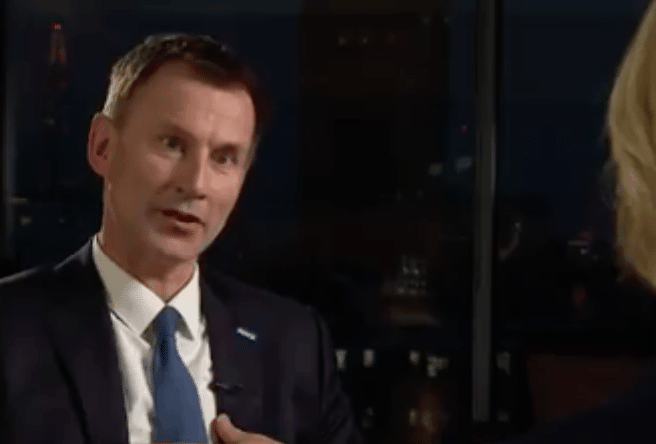 As the scale of the winter crisis facing the NHS – a crisis the Government was repeatedly warned about – became increasingly apparent today, the Prime Minister and Health Secretary veered from one car crash interview to another.

On Wednesday Theresa May flatly denied there was any “crisis”, insisting “the NHS has been better prepared for this winter than ever before, we have put extra funding in.

”There are more beds available across the system, we’ve reduced the number of delayed discharges of elderly people who would otherwise have been in NHS beds rather than in social care.”

But that was belied by NHS staff painting a horrific picture of cancelled ops and blocked hospitals around the country.

– And by Theresa May’s own Health Secretary who soon after appeared on Sky News apologising and admitting that the dire situation was “absolutely not what I want”.

Hunt added: “if you are someone whose operation has been delayed I don’t belittle that for one moment, and indeed I apologise to everyone who that has happened to.”

Then later in an even worse car crash interview having obviously been told to deny the mounting crisis now, Jeremy Hunt was torn apart by BBC Newsnight’s Emily Maitliss as she confronted him with the grim statistics of his record as Health Secretary.

Jeremy Hunt  thanked NHS staff “not just from me but from the whole country because we are incredibly proud of the efforts they are going to.”

“You are saying a big thank you to NHS staff,” replied Newsnight’s Emily Maitliss, before proceeding to reel out some of what they are saying:

“Richard Fawcett senior doctor in emergency medicine: ‘I personally apologise to the people of Stoke for the third world conditions.’

“Dr Taj Hasan, President of the Royal College of Emergency Medicine: ‘We are seeing conditions people have not seen in their working lives.’

“Dr Nick Scriven, President of the Society of Acute Medicine: ‘The position is as bad as I’ve ever known.’

“Tracey Bullock, another one – Chief Exec at Mid-Cheshire Hospitals ‘I’m 34 years in and i’ve never seesn anything like this.”

“So shall I ask that again? Is this a crisis?”

“You’re happy to say that we planned to cancel 50,000 operations or postpone?” continued Maitliss in disbelief as Hunt tried to deflect responsibility.

“Let me explain exactly what the plan was,” nodded Hunt, implying that this year has been better as last year “we ended up cancelling lots of operations the day before.”

"You admit you haven't hit your own targets since 2015… As Health Minister you are happy to say that 55,000 operations cancelled was 'part of the plan'?!NHS Staff are saying :"I personally apologise to the people of Stoke for these 3rd world conditions" – Dr Fawcett"We are seeing conditions people have not seen in their working lives" – Dr Hasan"The position is as bad as i've ever known" – Dr. Scriven"I'm 34 years in and i've never seesn anything like this." Dr. BullockSo called 'Health Secretary' Jeremy Hunt's carcrash interview in full. His defence amounts to:'crisis? What crisis? We PLANNED this.'

After Theresa May’s denials of an NHS crisis, Labour’s shadow health secretary John Ashworth retorted: “Yet again Theresa May reveals how entirely out of touch she is. Next, she will be trying to lecture patients that ‘nothing has changed’ for patients.

“The reality is we see hospitals at full capacity, ambulances backed up, cancelled operations and patients waiting for hours on trolleys.

“Instead of burying her head in the sand, Theresa May needs to explain why she has allowed underfunding and cuts to health and social care to continue.”