Q: When is it OK for Conservative councillors to post racist jokes about “brown” people being “lazy” “dogs”? A: When reinstating them helps Tories win a local council. LOL As certain disgruntled Labour Party figures join Conservatives and much of the media in portraying a Labour council victory  (Labour up 77 to 2,350 councillors as […]

Q: When is it OK for Conservative councillors to post racist jokes about “brown” people being “lazy” “dogs”?

A: When reinstating them helps Tories win a local council. LOL

As certain disgruntled Labour Party figures join Conservatives and much of the media in portraying a Labour council victory  (Labour up 77 to 2,350 councillors as Tories lose 33 councillors – down to 1,332 – see below) as a shameful defeat. And Jeremy Corbyn’s enemies line up to blame him for anti-semitism being associated with the Labour Party, let’s pause to take in this rather under-reported local election scandal.

The Conservative Party reinstated a councillor suspended for racism just to win a key council seat.

The other narrative in much reporting of the election has been the Labour Party being punished up North as some sort of revenge for questioning the wisdom of taking the UK out of any sort of customs union with Europe – including Ireland.

Many commentators pointed to the Conservative win in Pendle council in the North West as proof that Labour were being punished by the electorate up North.

But one person the Conservative Party weren’t prepared to punish any more was former Tory mayor councillor Rosemary Carroll, suspended from the Tories for a sickeningly racist joke on Facebook describing Asian people as dogs. 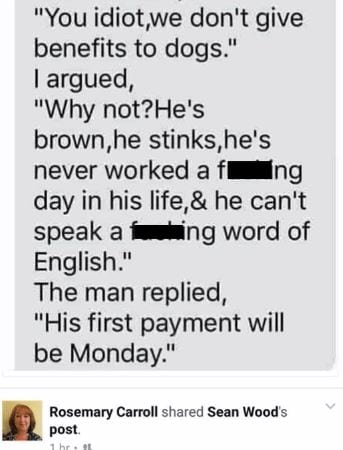 Cllr Carroll who shared the sick xenophobic joke on Facebook last June, was allowed to rejoin the Tory party “as the votes were being counted” on Friday, giving the Tories control of Pendle Council in Lancashire for the first time in 39 years.

The Conservative group leader Cllr Paul White insisted that “the post was shared in error but Rosemary fully accepted the potential upset caused and sincerely apologised.

“Having served her suspension period she rejoined the party and completed additional diversity training.”

Cllr Carroll had claimed that she meant to delete the nauseatingly racist post but instead accidentally published it.

“Here’s a councillor who brought shame on the borough on an international level and was welcomed back into the fold with open arms simply to grab control to the council,” said Labour group Cllr Mohammed Iqbal.

“She turned up with a Conservative rosette literally as the votes were being counted… If it was a fair and square result I could take it on the chin but this is shocking.”

That investigation appeared to end last night when the local election results came in with Pendle remaining a hung council with no overall control until the Tories reinstated their race joke colleague who had remained a councillor while suspended from her party. 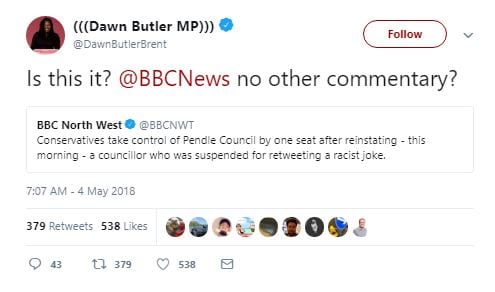 As so much BBC news was devoted to describing Labour’s election night as a story about anti-Semitism, many took to social media to say imagine how this story would have been reported if the Labour Party had done something this despicable to win a council.

He told Sky News: “This appallingly cynical move for short-term political gain will lead many to question the commitment of Pendle Conservatives to challenge racism.

“Coming so soon after the Windrush debacle, the admittance that the Home Office had deliberately created a hostile environment for immigrants and the prime minister’s refusal to allow visas for foreign doctors to work in the NHS, it is easy to see why support for the Conservatives amongst minority communities is so low.

“Even Donald Trump received a greater share of the minority vote in the presidential elections than the Tories achieved in last year’s general election.”