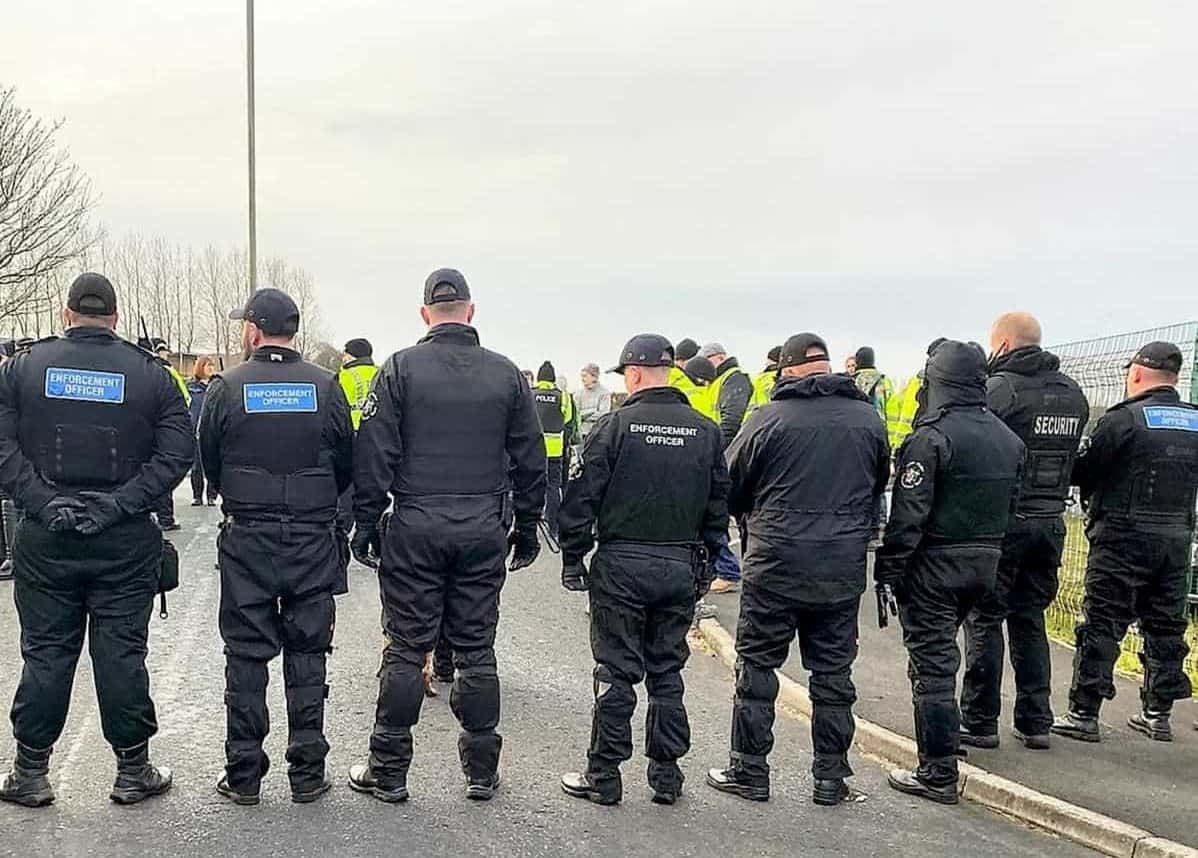 A dozen anti-fracking protesters have been forcefully removed from a drill site during a dramatic dawn raid on private land.

Specialist eviction officers descended on the site in the early hours of yesterday morning to turf out 12 illegal trespassers.

The protesters had set up a number of camps on the land, which is a mile from a site being drilled by oil and gas company Cuadrilla.

It is thought some the apprehended individuals were not only protesting, but also living on the private land for the past three years.

They are members of anti-fracking group New Hope Resistance, which was set up two years ago to protest against leading shale gas company Cuadrilla.

The group’s website says the land which they occupied until yesterday will one day become “the largest gas field in Western Europe”.

The government recently announced a moratorium on fracking, until or unless the activity is proven safe.

A video shot at the Preston New Road site yesterday shows a piece of heavy machinery tearing down a shack that had been erected by the illegal trespassers.

Another clip shows two individuals lying on the ground refusing to leave the site and a series of images show the raid as it was undertaken.

Eviction firm Able Enforcements were tasked with carrying out the raid and 30 officers, including bailiffs, security guards and dog handlers, attended.

The company was contacted by the landowner, whose identity isn’t known, after the protesters repeatedly refused to leave the site.

Officers acted with “speed and surprise” to prevent the protesters “locking themselves to structures or trees”, an Able Enforcements spokesman said.

Police were in attendance throughout the eviction.

Steve Wood, operations director at Able Enforcements, said: “This was a challenging job and a complicated site.

“These squatters have been here for more than three years, were well entrenched and are experienced protesters.

“Fortunately, we’ve met most of these individuals before – we see the same people at jobs all over the country so we knew what to expect in terms of aggression, abuse and violence.

“Our main priority was to act with speed and surprise, to prevent them locking themselves to structures or trees, or to call up reinforcements from nearby camps.

“The eviction has taken three weeks of planning and I am pleased that my staff showed suitable professionalism in the face of considerable verbal provocation and physical abuse.

“We set strict guidelines for our personnel of how to treat the protesters, to avoid any false accusations that they’ve been mistreated in any way.

“Our expertise is in managing these situations quickly, securely and according to the law which we are employed to uphold.

“We understand that the local community here is against the fracking industry – that’s not our concern.

“There is a private landlord here who has suffered from the illegal activity of these squatters and it is our job to remove them.”

Mr Wood said Able Enforcements is dealing with 20 evictions of squatters, travellers and protesters from public and private sites each month.

The firm’s clients include local authorities, private landowners and oil and gas firms.