By Nathan Lee, TLE Correspondent  Academics Stand Against Poverty (ASAP) have created an infographic to demonstrate the role political parties play in enabling a flourishing life. With the impending General Election just two days away, the group of leading academics have completed an audit of the political parties’ manifestos in order to assess their stance on […] 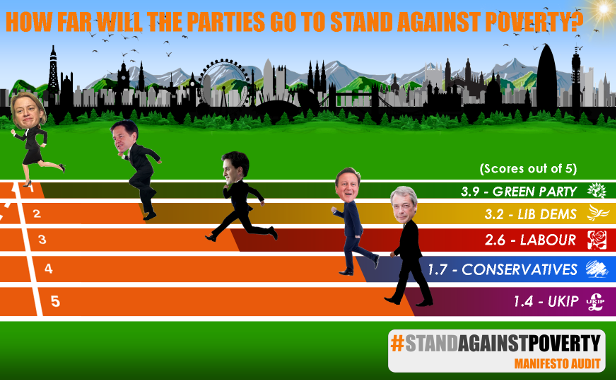 Academics Stand Against Poverty (ASAP) have created an infographic to demonstrate the role political parties play in enabling a flourishing life.

With the impending General Election just two days away, the group of leading academics have completed an audit of the political parties’ manifestos in order to assess their stance on UK and global poverty. The results showed the Green Party goes the furthest in their stand against poverty with a score of 3.9 out of 5. The Conservatives on the other hand scored a measly 1.7 out of 5 and UKIP only 1.4.

ASAP approached CreativeConnection to create an infographic to define and visualise ‘A Flourishing Life’,  a clear image that represented the policy areas and themes of this year’s main party manifestos. This was to assess to what extent the main parties enable British Society to have a flourishing life.

There are of course the basics, the ‘essentials of life’ – food, shelter, income, but living a fulfilling life is more than just existing, it is to flourish. A range of needs such as meaningful relationships, feeling safe and leisure time are required in order to live a fulfilling life. However there are many people today whose needs are not met, who experience poverty in different areas of their life, and this is greatly down to conditions which are influenced by the political parties in power.