They ended up socialising and hugging their cage in an experiment that explored human social behaviour.

The notoriously antisocial octopus has been made to mingle…. after scientists fed them the party drug ecstasy.

And the experiment, which left the creatures getting all touch-feely and hugging their cages, could open a window into treatments for depression and other mental disorders.

Scientists found that the mood altering drug synonymous with the rave underground scene changed them in a similar way to partygoers.

It suggests an evolutionary link between the social behaviours of the sea creature and humans – despite the species being 500 million years apart on the ‘tree of life’.

The finding is remarkable since the last common ancestor we shared would have been a wormlike marine creature.

With their rounded bodies, eight arms and bulging eyes, octopuses are regarded as the closest thing on Earth to an alien.

The US team say it is fascinating to see ecstasy, the nickname for psychoactive drug MDMA works on them exactly the same way it does on us.

Lead investigator Professor Gul Dolen, a neuroscientist at Johns Hopkins University, Baltimore, Maryland, said: “The brains of octopuses are more similar to those of snails than humans.

“But our studies add to evidence they can exhibit some of the same behaviours we can.

“What our studies suggest is certain brain chemicals, or neurotransmitters, that send signals between neurons required for these social behaviours are evolutionarily conserved.”

His bizarre experiments analysed the genome of a type of octopus particularly unfreindly towards its peers, then tested its reactions after being given the drug.

The research published in Current Biology may open the door to accurately studying the impact of psychiatric drug therapies in many animals distantly related to people.

Prof Dolen said octopuses are well known for their intelligence. They can trick prey to come into their clutches, and it is believed they also learn by observation.

Like humans, they are thought to have episodic memory which is very rare in the animal kingdom. This is the recollection of autobiographical events, past personal experiences that occurred at a particular time and place.

The gelatinous invertebrates also have a well earned reputation for escaping from their tank, eating other animals’ food, eluding caretakers and sneaking around. 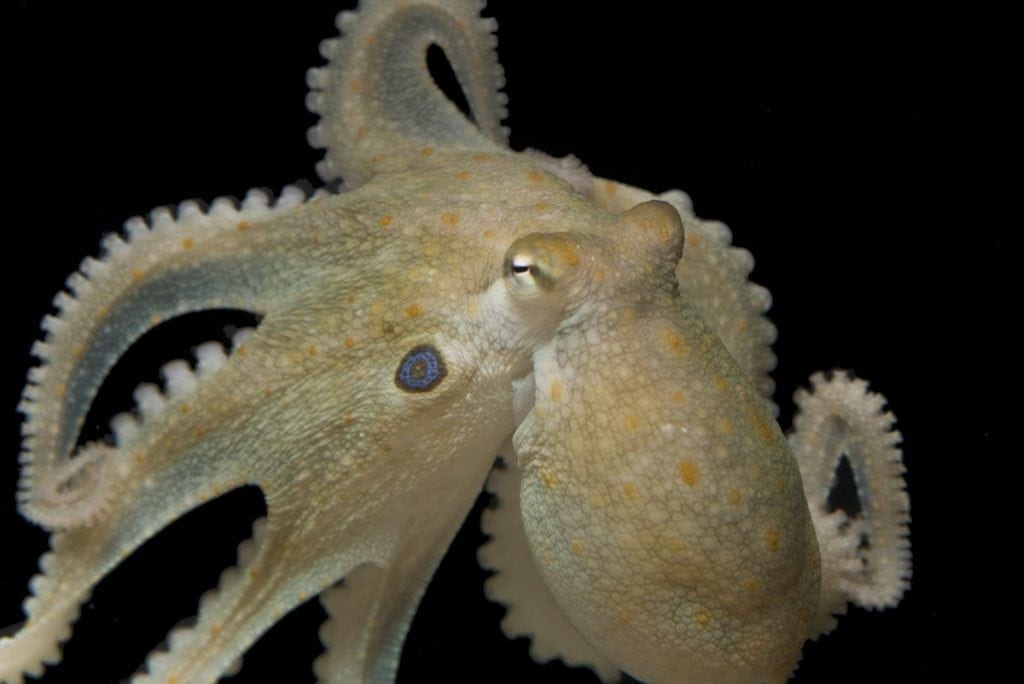 But most are anti social and avoid interactions, including with other octopi. Despite this, Prof Dolen suspected there may be a link between the genetics that guide social behaviour in them and humans.

One place to look was in the genomics that guide neurotransmitters, the signals brain cells pass between each other to communicate.

So he teamed up with Dr Eric Edsinger at the Marine Biological Laboratory in Woods Hole, Massachusetts, who recently mapped the full DNA of the California two spot octopus, or Octopus bimaculoides.

Like most octopi, this colour changing cephalopod likes to be alone most of the time, unless it is trying to mate.

But when given ecstasy, known for boosting emotional empathy and prosocial behaviour in human, these octopialso seemed to want to hang out with each other – even if they weren’t trying to find a mate.

Specifically, the researchers found octopi and humans had nearly identical systems for carrying the feelgood chemical serotonin through the brain.

Serotonin is a well-known regulator of mood and closely linked to certain kinds of depression.

Ecstasy boosts mood by binding to this pathway so they decided to see how octopi react to the drug – which makes humans, mice and other vertebrates more sociable.

In one was a plastic action figure, another a second octopus and the last was left empty.

The animals were monitored for 30 minutes and the two males focused their attentions only on the females – while shunning other males.

Then, after waiting several hours, they soaked the four male and female octopuses in an ecstasy bath for 10 minutes which they absorbed through their gills, before returning them to the partitioned tank.

This time, there was a clear difference. The octopi were ‘high’, spending much more time with other octopi, of both sexes, than before.

All four tended to spend more time in the chamber where a male octopus was caged than the other two chambers.

This is markedly unusual behaviour for the creatures, who normally stick to themselves. Social behaviour that is normally suppressed was being expressed.

Prof Dolen said: “It’s not just quantitatively more time, but qualitative. They tended to hug the cage and put their mouth parts on the cage.

“This is very similar to how humans react to MDMA; they touch each other frequently.”

Prof Dolen said the experiments suggest the brain circuits guiding social behaviour in octopi are present in normal conditions, but may be suppressed by natural or other circumstances.

He explained: “Octopuses will suspend their antisocial behaviour for mating, for example. Then, when they are done mating, they go into aggressive, anti social mode.”

Prof Dolen added the results are preliminary but if replicated in further studies octopuses may be used as models for brain research.

When people take ecstasy, a rush of serotonin and other chemicals linked to mood including dopamine and oxytocin produce feelings of emotional closeness and euphoria.

This makes them more interested than they would normally be in connecting and sharing with others.

Prof Dolen said: “Despite anatomical differences between octopus and human brain, we’ve shown that there are molecular similarities in the serotonin transporter gene,”

“These molecular similarities are sufficient to enable MDMA to induce prosocial behaviours in octopuses.”

The researchers are now in the process of sequencing the genomes of two other species of octopus, which are closely related but differ in their behaviours.

By comparing them, they hope to gain more insight into the evolution of social behaviour.

In humans, Ecstasy leads to a brutal comedown the next day where people will feel depressed and low.

Despite being a class A drug in the UK, it has become alarmingly popular, and not just at raves.