Barry Watson, 48, leapt from his Land Rover and used a torch to smash the windows of a Mitsubishi Shogun carrying the anti-hunt group

A hunt supporter has apologised after being caught on camera trashing a car with a group of demonstrators sat inside.

Barry Watson, 48, leapt from his Land Rover and used a torch to smash the windows of a Mitsubishi Shogun carrying members of the anti-hunt group.

As the saboteurs drove off, he threw the torch after the car – but it flew through one of the windows and hit a man inside in the back. 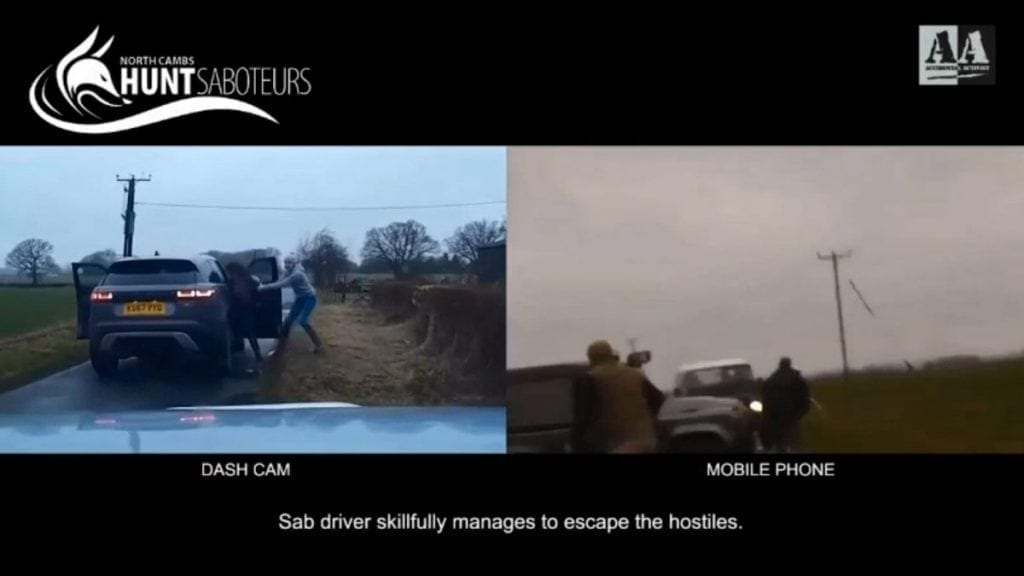 Watson chased the men at high speed from the scene of the attack just a few miles from his home in Glatton, Cambs., to Peterborough Police Station, where he fled.

He appeared before Peterborough Magistrates on Thursday, where he pleaded guilty to criminal damage and assault occasioning actual bodily harm.

Speaking outside court, a spokesman for the North Cambridgeshire Hunt Saboteurs Association, said: “When all the vehicles finally came to a stop, Mr Watson leapt out and violently attacked his victims’ vehicle with a blunt object, smashing three windows and injuring the occupants with brute force and broken glass from the shattered windows.

“After the shocking attack, the victims made their escape. However, he continued to chase them at high speed in his Land Rover, until the pursuit lead to Peterborough Police Station, when he fled the scene.”

The court heard Watson had caused more than £1,000 of damage to the car in the attack on February 10. 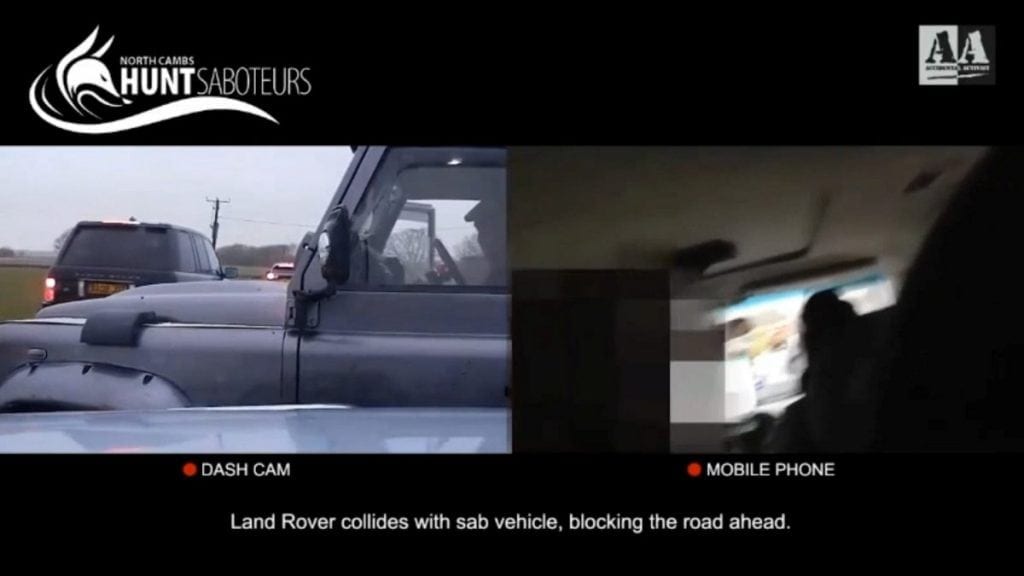 North Cambridgeshire Hunt Saboteurs Association were monitoring the Fitzwilliam Hunt when they were set upon in a narrow country lane.

Footage shows the hunt saboteurs’ car surrounded by the high-powered vehicles, with one skidding in front of them to block them in.

Watson then approaches the saboteurs’ car and smashes in several of their windows.

A woman screams as the narrator yells: “OK they’ve just put our window through! Police! 999! Now!’

One of the anti-hunt demonstrators – filming as the drama unfolds – says: “We are being beckoned by this d***head to pull over but I’m not pulling over now. No.’

The Land Rover aggressively tailgates the ‘saboteurs’, before the cars speed through a village, thought to be Lutton, Northants.

Stephen Welford, defending Watson told the court that Watson reacted ‘entirely out of character’ after one saboteur said to him ‘we know who you are, your time has come.’”

Mr Welford said: “Watson is a hunt supporter – he does not take part in it, but he goes and watches the hunt.

“On this day he had been out with the Oakley Hunt.

“He had spoken to the sabs earlier in the day. He was spoken to by one saboteur who said to him ‘we know who you are, your time has come.’”

Mr Welford said in the past Watson had received threatening phone calls to his home from hunt saboteurs.

“He had been threatened, abused and worn down,” the lawyer said.

“He came across this Shogun, and foolishly took matters into his own hands.

“This was entirely out of character and is a matter he regrets.”

Watson was ordered to carry out 80 hours of unpaid work, and ordered to pay £85 costs and an £85 victim surcharge.

Chair magistrate Hilary Shields did not order him to pay compensation however after hearing the saboteurs had managed to raise money to pay for the damage through a crowdfunding website.

Speaking after sentencing, a spokesman for the North Cambs Hunt Sabs said: “While we are disappointed with the leniency of the sentence, this reflects Mr Watson’s guilty plea and acceptance of the charges.”

Speaking previously, the group’s spokesperson Lee Moon said: “The Fitzwilliam hunt are under increasing pressure from hunt saboteurs and will soon be in court to answer charges of illegal hunting.

“Time and again we see hunts resorting to violence when decent folk stop their illegal killing. 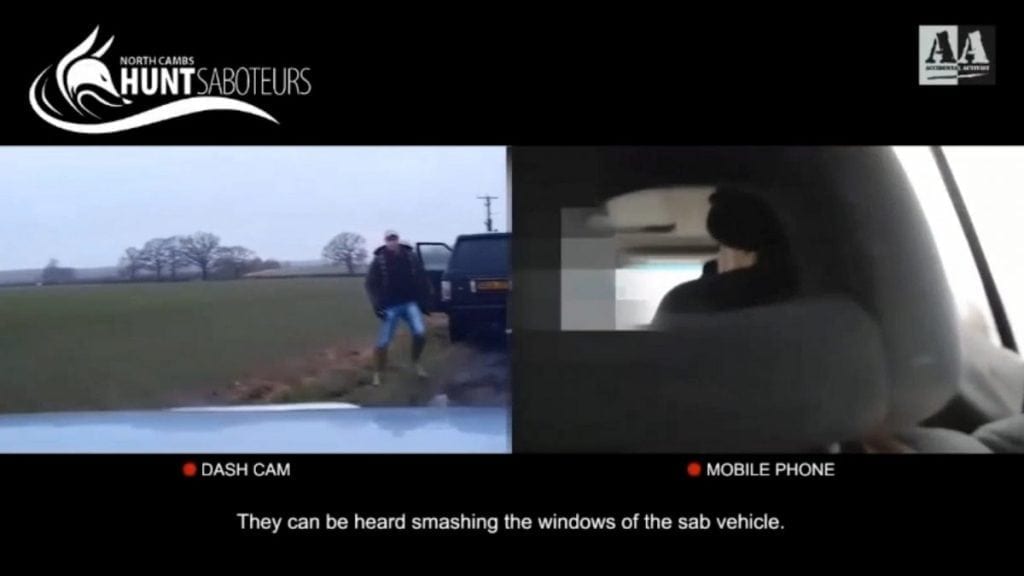 “These people are fools because we will never be deterred by acts of violence and in fact it only proves how effective we’re being and spurs us on to greater efforts.

“Whether the police decide to act or not, North Cambs sabs will have the backing of other sab groups to ensure justice is done.”

The Fitzwilliam Hunttakes place over 600 square miles of land in the area of Cambridgeshire between Stamford in the North to Higham Ferrers in Northamptonshire.

The hunt has been running for more than 250 years in the area and members also use a golden eagle. 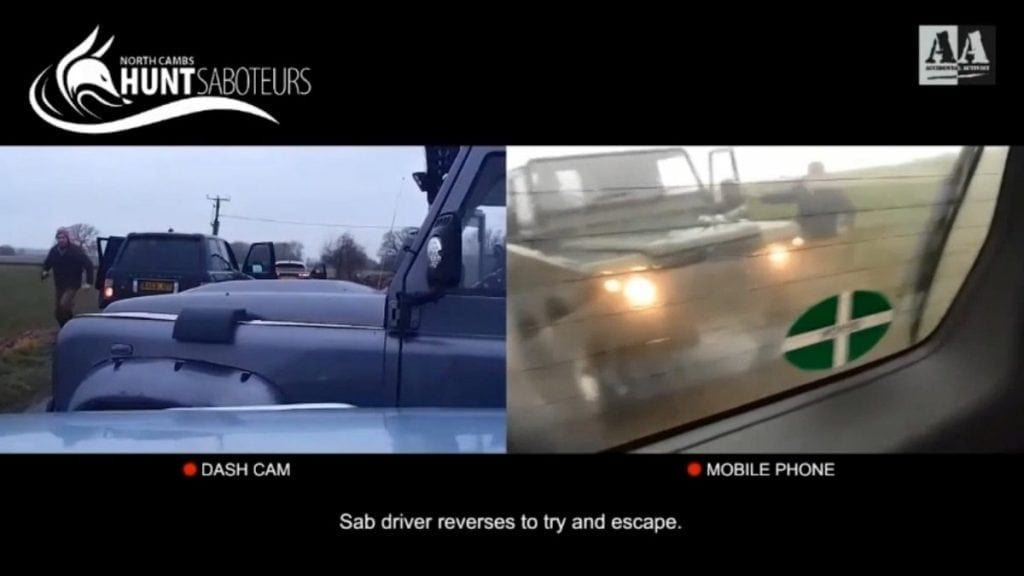 Between November and March, the family-owned pack goes out two days a week, and the hunt says that it always stays within the law.

In a statement issued following the incident, a spokesperson for the hunt said: ‘The Fitzwilliam (Milton) Hunt does not condone the type of behaviour that is alleged to have taken place, even in the face of extreme provocation.”

The Hunting Act came into force on February 18, 2005, and banned the hunting of mammals with dogs in England and Wales