This is the moment a student confronted a man for his shocking sexist comments towards a woman, only to be hit with an outburst of racial abuse.

Rickesh Advani, a political science student at Cambridge caught on camera the moment a white middle-aged man said to him ‘Brexit, go back home’.

The 28-year-old bravely stood up to the man in a Cambridge surgery after a female patient bent over to put her bag down only to be told to ” spread ’em” and to “get your t*** out.”

The man was then heard saying “no not you, love” to a woman wearing a hijab

Rickesh, originally from London said: “I was absolutely disgusted by what I had heard and couldn’t believe that in 2018 people can be so bigoted.

“At the very first opportunity I told him to politely stop and hoped that would be the end of it.

“Any reasonable human in that situation would have accepted his wrong but he became unnecessarily aggressive to me.

The video also shows the man aggressively telling Rickesh to ‘pipe down’.

None of the other patients in the surgery stood by him when he confronted the racist and sexist comments and Rickesh says he is disappointed by how they reacted.

“I was very shocked that I was the only one that stood up and said ‘not this is not right’.

“Even when I asked someone to call the police, everyone just sat their and I hoped people would stick up for something so wrong.

Rickesh has in the past run a charity to help homeless and unemployed people get back on their feet.

He was also once homeless, completely turned his life around and now studying at Cambridge.

He says his experiences have taught him to always stand up for what is right. 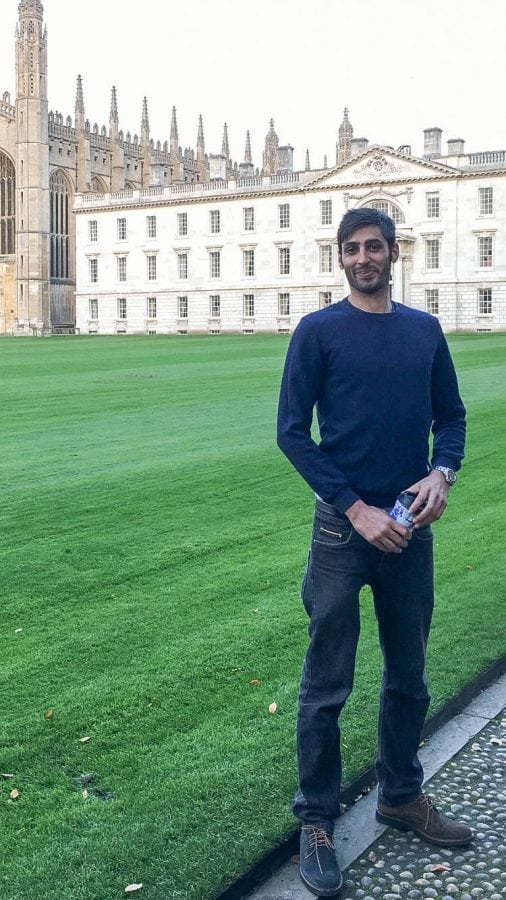 He added, “The comments and absolute disdain in his voice were what got to me and I couldn’t stand for her to believe no one cared as I would hate my partner coming home and telling me that happened and worse that no one cared enough to defend her.

“I was stunned at what I herd and it is a small surgery so there is no question the girl heard.

“I just hoped he would stop but he was not apologetic or embarrassed but aggressive and clearly bigoted.

After the incident, he reported the issue to police but has yet to hear back from them.

The surgery has also apologised.

Simon Gridley, a surgery manager at Cornford House Surgery, wrote in a letter to him: “I would like to apologise for our handling of the racial abuse you received on that day.

“My colleague mentioned that you felt you were unfairly treated as you [were made to feel] that you were the guilty party, when you had, quite rightly, stood up for another member of the public.

“This I would particularly like to apologise for, as this was not our intention. Our intention was to simply defuse the situation before it turned into something physical, and I deeply regret that the way we did this made you feel like you had done something wrong.

“We do not possess the authority to forcibly remove/detain a person unless they commit an act of physical violence or aggression. Thus we could not force the other person into a separate room.

“I know an apology is NOT the same as getting it right the first time, but again, I sincerely apologise.”