“This is another appalling example of the manner in which our people are frequently regarded by some members of the public." 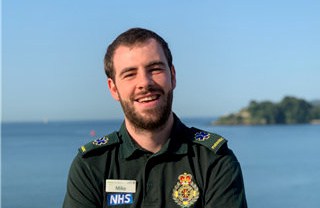 A paramedic has spoken out after his team were punched, kicked and spat at when they went to the aid of an injured man.

Mike Jones revealed he was punched in the chest by a thug who then spat in his face before turning on his two colleagues.

The patient then attempted to rugby tackle Will Kivell and kicked Richard Waghorn in the ribs as they also tried to help him.

The trio of paramedics were attacked after they responded to a potentially serious incident in Camelford, Cornwall, involving a man who had fallen and was reportedly unconscious.

On the scene they came across Kevin Spillane, 27, who appeared to be intoxicated and under the influence of drugs. He became verbally and physically aggressive when they arrived soon after 8pm on 12 September.

Members of the public stepped-in to help restrain the man, and police were called.

Spillane, of Camelford, was arrested and after being treated in hospital was taken into custody and charged.

He was convicted on 14 September at Exeter Magistrates’ Court of four charges of assaulting emergency services workers and given a 26-week prison sentence, suspended for 12 months

But speaking after the conviction, Mike, who needed treatment in the hospital’s emergency department, said: “I joined the ambulance service to help people in need, and would not have expected to be assaulted.

“Although I enjoy serving my community, being a paramedic can be very challenging. This was one of the worse incidents I have attended in my time with the ambulance service and in my other role with the police.

“Unfortunately it also meant we were unable to continue responding to patients during a busy night shift.”

Spillane was also ordered to pay a total of £450 compensation, placed on a curfew for four months between the hours of 8am and 6pm, and given a 20-day rehabilitation order with supervision requirement.

Fellow victim Richard added after the case: “A minority of people take the view that ambulance staff are there to be abused and assaulted.

“Thankfully other people came to assist us that evening, and without their interaction the outcome would have been far worse.”

A SWASFT spokesperson said: “This is another appalling example of the manner in which our people are frequently regarded by some members of the public. We are glad this individual has been prosecuted.

“Nobody should have to face that kind of unacceptable behaviour, especially not our dedicated and compassionate healthcare professionals.

“Sadly they face violence and aggression every day while they are trying to protect and save people’s lives, which can have serious consequences on them, their families and colleagues.

“Our people put themselves at risk for the sake of others, and we support whatever action is necessary to protect them from harm and ensure they feel safe.

“Please respect our people, and help them to help you.”

Ambulance staff reported 153 physical assaults by patients and other members of the public between 23 March and 23 September. That represented a 58 per cent increase on the 97 reported assaults during the same time period in 2019.

They also reported 249 incidents of verbal abuse during the six months, compared with 228 last year. More than one in four (69) of the verbal incidents were by callers to 999 Control Room staff.