“She definitely paces out her laps quite quickly. I kept telling her to slow it down.”

by Joe Mellor
in Good News 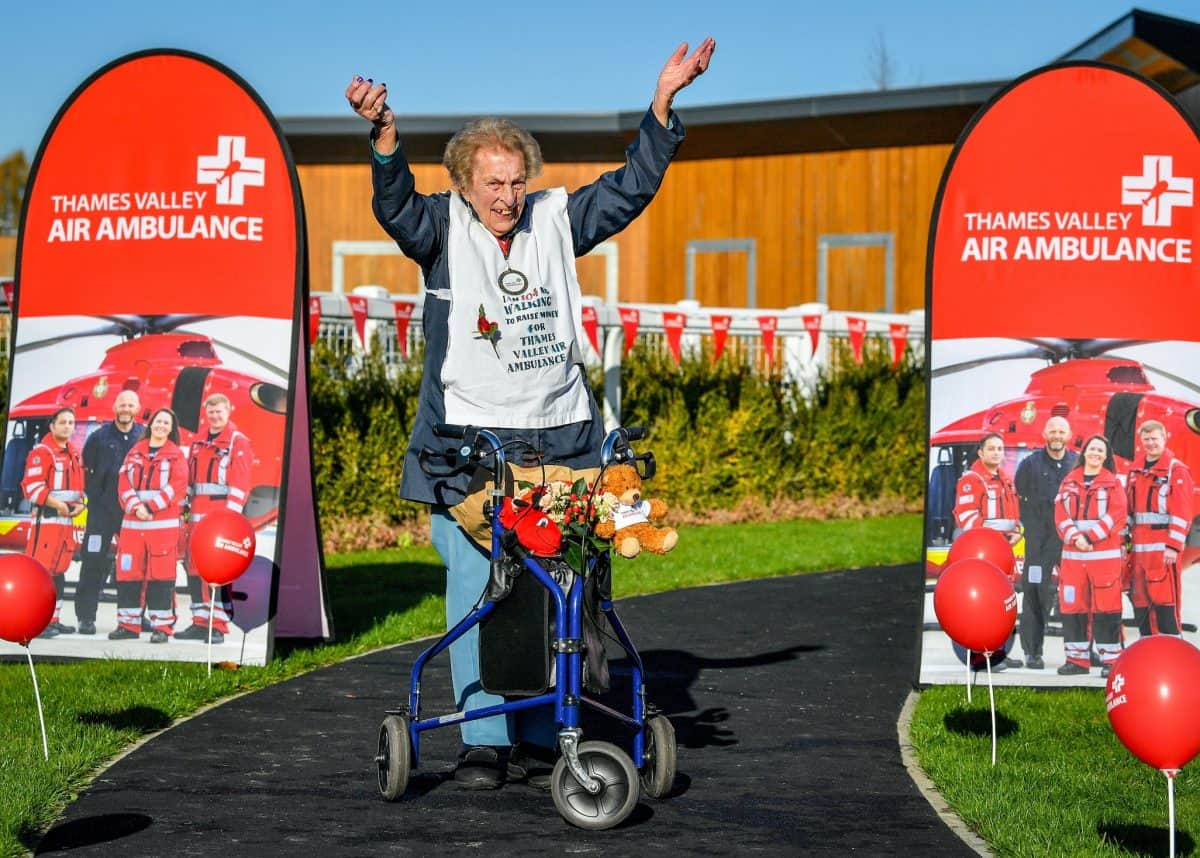 A 104-year-old woman has completed a marathon walk for charity, with her family describing how the “unstoppable” great-grandmother is looking at her next fundraising challenge.

Ruth Saunders, from Newbury, Reading, crossed the finish line of her 26.2-mile walk at Newbury Racecourse on Wednesday, a day before England goes into a second national lockdown.

Following in the footsteps of Captain Sir Tom Moore, Ruth had originally set herself the goal of walking 104 laps of her block – around 21 miles – to match her age when she set off on the challenge on September 8.

Her granddaughter Kate Saunders, 50, described the moment Ruth made it across the finish line on a bright, sunny morning.

While slow and steady may win the race, Kate said there was no stopping her grandmother.

“She definitely paces out her laps quite quickly,” she said. “I kept telling her to slow it down.”

Ruth has so far raised more than £31,000 for Thames Valley Air Ambulance, surpassing her original target of £500 on JustGiving.

She had previously held coffee morning fundraisers for the charity but these had to stop due to the pandemic.

Kate said her grandmother has inspired people young and old to join her on a socially-distanced walk to keep her going, including her two daughters Gemma, 16, and Hannah, 14.

She described how a four-year-old in the neighbourhood had joined Ruth on the walk one day and donated money too.

She added: “Everyone’s really proud of her, she’s so independent, lively and energetic, she puts younger people to shame.

“Donations are still coming in daily, even from around the world.

“My eldest daughter’s friends from school were saying ‘your great-grandmother is so amazing’, all ages are feeling so inspired by her, in the local area and beyond.”

Ruth joins the likes of Sir Tom, the 100-year-old veteran who raised millions for the NHS during lockdown, and 100-year-old Islam Choudhury, who raised more than £420,000 for various good causes while fasting during Ramadan.

As England is set to go into a second national lockdown from Thursday, Kate said the family will be supporting Ruth throughout the month as part of her bubble.

She added: “The first lockdown was difficult for everyone.

“She (Ruth) gave me a shopping list one day asking for specific things and I couldn’t get them for her because there just wasn’t anything left in the shops.

“Coming into the next lockdown we are looking at how we can support her and keep stock of what she needs, all of her family are there for her.”

With a new taste for adventure, Kate said they have already been talking about Ruth’s next challenge.

“She said ‘I can swim the English Channel? Do a parachute jump?’ When she puts her mind to something there is no stopping her,” Kate added.