A “fragile and vulnerable” woman has been JAILED for six months for begging on the streets – for just 50p. Marie Baker, 38, who can’t read and write, was sentenced without legal representation because she was unable to get a defence lawyer or legal aid. She was caged for 26 weeks at Worcester County Court […] 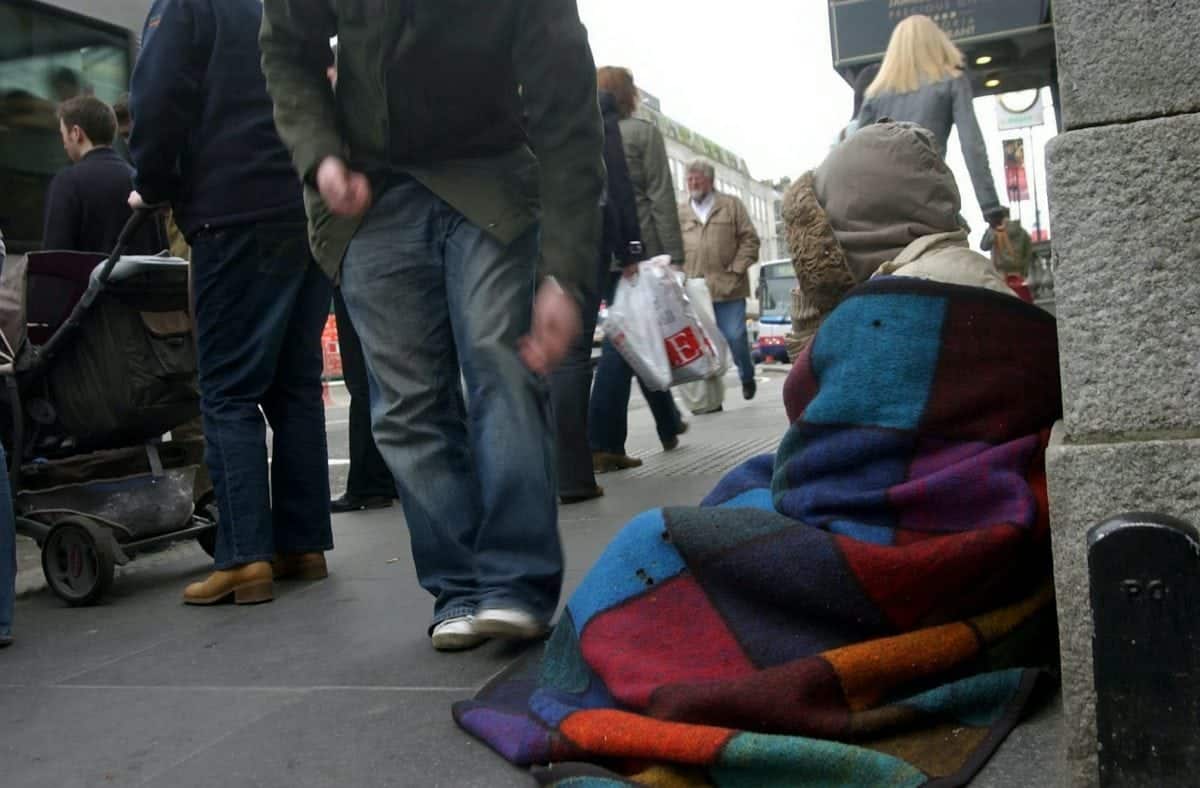 FILE PICTURE - A beggar on the streets of a British city. A "fragile and vulnerable" woman has been jailed for six months after begging for just 50p on the streets of Worcester. See NTI story NTIBEG. Marie Baker, who has difficulty reading and writing, was sentenced at Worcester County Court without legal representation – because she was unable to get a solicitor or legal aid. The 38-year-old was sentenced in February by District Judge Mackenzie, after twice breaching a civil injunction which banned her from begging in the city. The 26-week sentence has been condemned as a "damning indictment of our justice system" by legal campaign group the Howard League for Penal Reform. The judge said while Ms Baker's begging was not "aggressive" or persistent, the fact she had repeatedly breached court orders meant a more "significant" penalty was necessary.

A “fragile and vulnerable” woman has been JAILED for six months for begging on the streets – for just 50p.

Marie Baker, 38, who can’t read and write, was sentenced without legal representation because she was unable to get a defence lawyer or legal aid.

She was caged for 26 weeks at Worcester County Court in February after she twice breached a civil injunction which banned her from begging in the city.

But the judge who sentenced her has blasted the legal system for “conspiring against a vulnerable individual”.

A leading charity has also slammed the decision and branded it as a “damning indictment of our justice system”.

In his sentencing report, which was published on Wednesday, District Judge Philip Mackenzie said he was “disturbed and concerned” Baker couldn’t get a solicitor.

In his judgement, he added: “I am disturbed and concerned that Ms Baker attends before me today without the assistance of any public funding or a solicitor.

“I am particularly concerned about that because, on any view, Ms Baker is a fragile and vulnerable individual and that makes it all the more regrettable that she has not got legal assistance.

“I have reached the conclusion that she can have a fair hearing and that every opportunity has been afforded to her to prepare a case with assistance from a solicitor, but through no fault of her own she has not been able to secure that.

“It is wholly unsatisfactory that the system conspires against a vulnerable individual like this, so that she cannot get the legal aid and solicitor assistance that she really needs.” The anti-social behaviour injunction against Baker was first granted at Worcester County Court on December 17, 2015.

The court heard she breached it three times by begging in Worcester – resulting in jail sentences of one day, 28 days and three months.

Baker then appeared at the court on February 8 to be sentenced for breaching the injunction on November 25 last year and January 2 this year.

District Judge Mackenzie said Baker’s begging was not “aggressive” or persistent but the fact she had repeatedly breached orders meant a more “significant” penalty was necessary.

He added: “The aggravating factors, quite obviously, are the repeat and continuing disobedience of the court orders.

“I am conscious that on both these two occasions, Ms Baker has simply asked for 50p.

“It has not been in an aggressive way. She has been told ‘no’ and she has not persisted.

“There is no aggravating feature in the way she has done this.”

The court heard Baker claimed she had an alibi and believed CCTV images would prove her account but she struggled to provide the evidence.

She also claimed mistaken identity and said police “had got it in for her” but both were dismissed by the judge. District Judge Mackenzie said: “All those matters potentially give rise to a line of defence which would better be explored by a solicitor assisting her.

“Knowing that, it is with great reservation that I have allowed the case to proceed today on the basis that it would be impossible to keep adjourning this case.

“This court cannot simply give repeat injunctions and allow people to go continuing begging, continuing to persist in a nuisance to the population, without some real teeth being given to the injunction.

“I am afraid, whilst I am very reluctant to send Ms Baker to prison for a lengthy period of time, I have got to mark the blatant repeat breaches of this injunction with something meaningful.”

The sentencing has since been condemned as a “damning indictment” of the justice system by the Howard League for Penal Reform.

Andrew Neilson, director of campaigns at the legal campaign group, said: “This is an utterly depressing case which highlights how all too often our courts are dealing with failings in social welfare and punishing poverty and vulnerability.

“It is quite simply a damning indictment of our justice system that a woman recognised by the courts as being ‘fragile and vulnerable’, with no legal representation, can be imprisoned for 26 weeks for begging for 50p.”

The Legal Aid Agency said civil cases are entitled to legal aid to pay for representation and that they would consider the judgement.

A spokesperson for the executive agency, which is sponsored by the Ministry of Justice, added: “Our published guidance confirms that cases of this nature are dealt with under criminal legal aid, however civil providers can apply for an individual case contract to carry out these cases where appropriate.”