After dementia left the groom unable to remember that he was married, he proposed to his wife for the second time and the pair renewed their vows 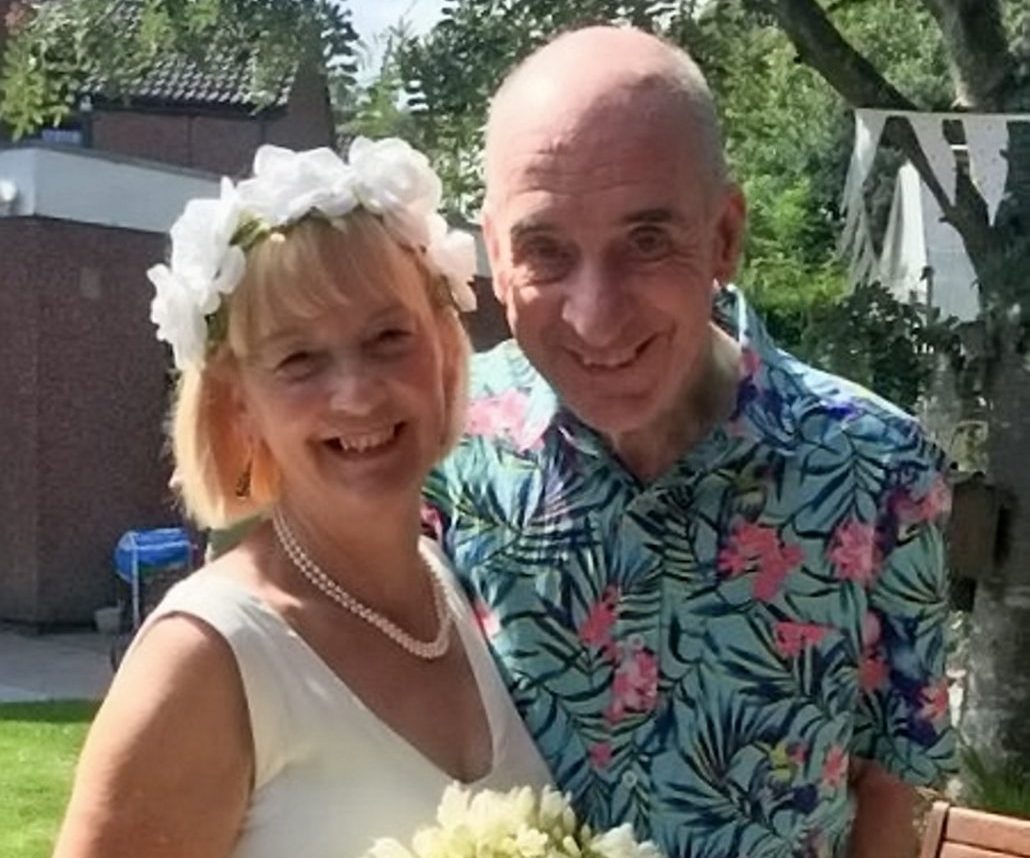 A dementia sufferer has remarried his wife of 12 years after he proposed again — when he forgot their first wedding and was convinced she was his new girlfriend.

Bill Duncan, 71, has been with Anne, 69, for 18 years, but has forgotten parts of the life together due to his illness.

Over the past nine years, Anne has cared for Bill full time and he now struggles to talk, so she was shocked when he popped the question last week.

Devoted Anne was sure he’d forget, but convinced she was his new girlfriend, smitten Bill persisted, and kept asking when they’d be walking down the aisle.

They tied the knot in an emotional garden ceremony at their home in Aberdeen on Saturday, and Anne said they are as happy as ever.

Anne said: “We’d been to a family member’s wedding earlier in the month, and clearly it touched Bill as he turned to me not long after and said that he wanted to be with me forever.

“He asked me when would we be walking up the aisle together, and I thought he would just forget he’d asked me that, but then the next day he said it again.

“I had some friends coming over on the weekend and thought that would be the perfect time to have our second wedding, if Bill still wanted to by then.

“Every day, he asked me about our wedding, and finally on 17 August, I walked down the aisle with my wonderful husband, 12 years after our first wedding.

“Our friends pitched in to help with decorating the garden and providing a wedding cake, and my daughter Andrea convinced me to get a dress for the day too.

“We renewed our vows surrounded by a small group of our friends and family, and even added some bits in for Bill so it felt like he really was getting married.

“It was the most beautiful day, and being with our friends in the garden we share together made it all the more perfect.”

Anne met Bill in 2001 when he was performing as an entertainer and magician in Aberdeen.

The pair fell in love and tied the knot for the first time back in 2007, and share a daughter, Andrea.

Three years later, Anne noticed Bill was acting differently and forgetting things, and after visiting the doctor, they were dealt the devastating news that Bill had dementia.

Over the past nine years, Anne has cared for Bill full time as he slowly forgets their precious memories together and he now struggles to talk.

One thing they still love to do together is dance, and the smitten pair set up a monthly event called Boogie in the Bar where dementia sufferers can enjoy a disco.

Anne said: “It can be difficult adjusting to life with dementia for both the sufferer and their partner, and we’re always looking for ways to still enjoy ourselves.

“We attended a friend’s party last year, and as Bill and I took to the dance floor, it was like all of our troubles melted away.

“Dancing together helped us forget dementia for that moment, and it was like my old husband was back in my arms – it was beautiful.

“We knew it could help other people in similar situations and give them a chance to escape their worries, so we set up a dementia friendly disco and it’s been a real success.”

Anne has been Bill’s rock since he was diagnosed with dementia in 2010, and their love has lasted the test of time.

Since getting married again last weekend, ‘newly-wed’ Bill has been on cloud nine, believing he has just wed his beloved girlfriend, and Anne couldn’t be happier.

She said: “Bill has been so affectionate ever since I accepted his proposal, lavishing me in kisses and cuddles.

“Since his diagnosis, his displays of affection have become scarce, so to have all of this love radiating from him towards me has been truly wonderful.

“Our ceremony in the garden was very emotional, and I’m just so happy that he still loves me this much after all these years of battling dementia.

“Bill is a wonderful man and has always brought joy to other people’s lives throughout his career as an entertainer, and he’ll never stop bringing joy to mine.”