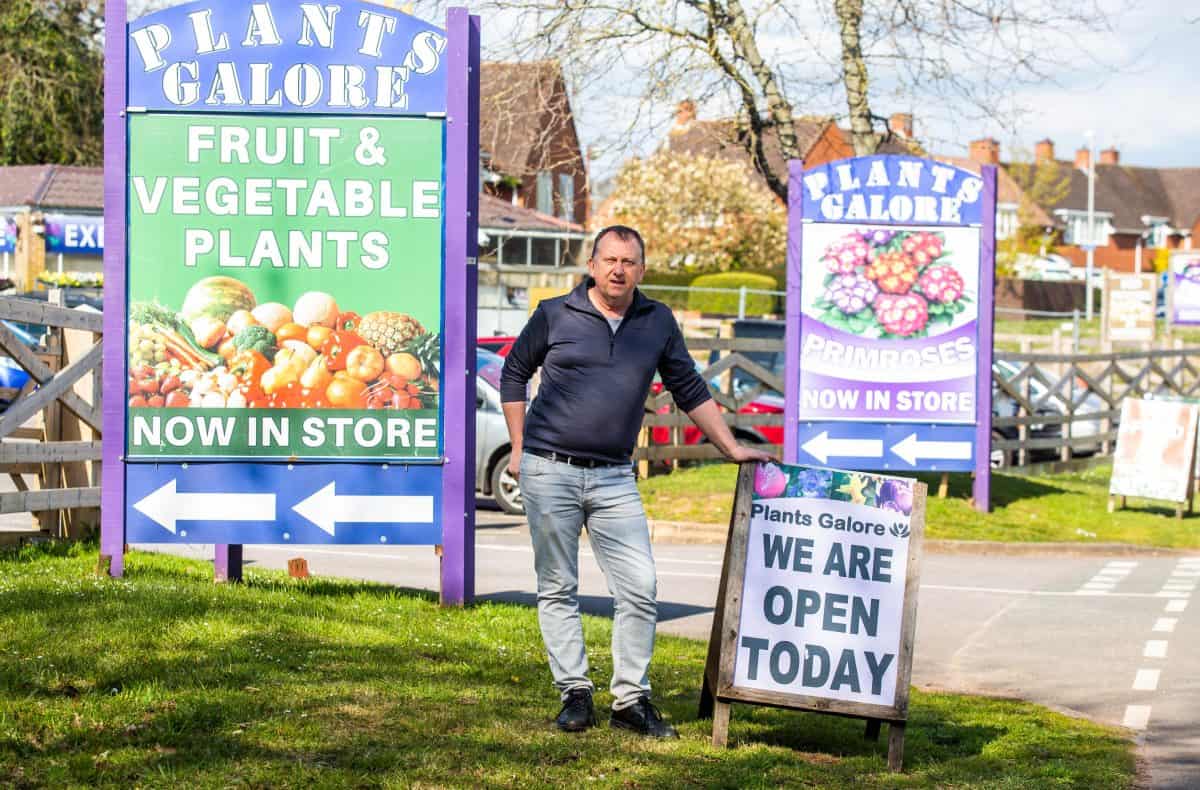 A garden centre owner has ‘ripped up’ a notice ordering him to shut down part of his business and will stay open – claiming he would lose millions.

Defiant Tony Joyner is refusing to acknowledge a prohibition order to stop his firm Plants Galore from selling certain items during the conoravirus pandemic.

It acted after the Government banned all “non-essential” retail in the UK as part of its efforts to fight the spread of Covid-19.

The order stated the store could itself stay open, but it must only sell tools and not plants – which is its main source of income.

Tony, 52, who co-owns three garden centres – in Exeter, Newton Abbot, and Plymouth, Devon, said he would be bankrupt as it would be forced to wipe out £1m of goods.

He said: “We are opening our stores, we are fully open and will stay open and this is rubbish. It doesn’t mean anything.

“The notice we were given is worthless.

“What they’re trying to do is limit us so to not sell plants, and I’m saying it’s wrong.

“That’s why I’m tearing up this notice, because it’s rubbish.

“The issue is that the council agreed that we’re a hardware store and can sell hardware equipment, they’re trying to limit us to that.

“That’s not fair. If we’re forced to close we will be facing bankruptcy.

“We have a million pounds worth of plants in a nursery and if we can’t sell them they will be skipped.”

Tony said that the problem is that all of his stock is perishable and won’t be fit to sell when the lockdown restrictions are eased.

He added: “We also owe a million to suppliers.

“All our money is tied up in stock, it’s like if you sell ice cream you can’t close for three months and then sell the same ice cream – it will have gone off.

“It’s the same for us. The plants we sell in April and May are annuals, they won’t be any good in three months – they will have to be skipped.

“We will go out of business because our debts will be higher than our income.

“Our stock will perish, we sell perishable products.

“What the government are saying is that we have to take on one million pounds worth of debt to stay in business, who can sustain that?

“The loans aren’t being given out for nothing, they want collateral.”

Tony said that supermarkets local to him were still allowed to sell plants, but despite this Exeter City Council were telling him he was not allowed to.

He added: “They have no understanding of what the law is, they’re misinterpreting the law deliberately.

“They’re acting heavy handed and over zealous and they need to be stopped.

“It doesn’t work that way, you can’t pick on the little people and leave the big stores alone, they’re taking everyone’s business up there.

“Our business is finished, if we don’t sell that we have no money, no income, so when we come back in three months we won’t need any employees because we’ll have no money.”

On their website, Plants Galore have put out a statement saying they are open and that shopping there is ‘extremely safe’.

The statement reads: “We are fully open to the public, it is legal to visit and shop at Plants Galore.

“The government yesterday clarified that hardware stores and pet shops were allowed to open with no restrictions on the non essential goods they can sell in store.

“That means that you the general public are free to visit our stores and buy any of our garden plant products and hardware garden products.

“The dictionary definition of a hardware store is ‘a store selling tools, implements and other items used in home life and activities such as gardening’.

“Out turnover is significantly hardware type products with garden plants.

“We have gone past the point of operating our business for any profit – we are simply desperate to avoid bankruptcy.

“Our company employs 70 staff and they need their jobs and we have a legal right to trade as supported yesterday by the government.

“Both the police and the local authorities need to step back and consider their legal position and stop harassing businesses which are allowed to open.

“The general public have a right to shop in our stores and not be harassed by the police regarding what they consider to be essential or non essential.

“Gardening is a healthy exercise and good for mental health and one of the few things you can do when locked in at home.

“We will therefore be open today and we will ensure that your shopping trip is extremely safe.”

Officers from Devon and Cornwall Police, including Sergeant Emma Storey-Barrett, have visited the store and spoken to Tony about the notice.

She said: “It’s been served a notice, it’s not a prohibition to closure.

“It’s giving conditions of sale, I.e. what they can and cannot operate.

“We’re just hear to engage with the staff, they sought our engagement so we can make that judgement with them.”