Courtney Garrett, 38, and her husband Philip, 42, now have six little ones after years of fertility struggles which left them fearing they might never have children at all

by Ben Gelblum
in Good News, Must Reads, World News

A couple who underwent IVF after years of failing to conceive now have their hands full – after having TWO sets of triplets.

Courtney Garrett, 38, and her husband Philip, 42, now have six little ones after years of fertility struggles which left them fearing they might never have children at all.

They welcomed their first trio in September 2009 after Courtney had two embryos implanted, one of which split.

They decided to have another round of IVF in the hope of giving triplets Jack, Oliver and Ellie a younger sibling. 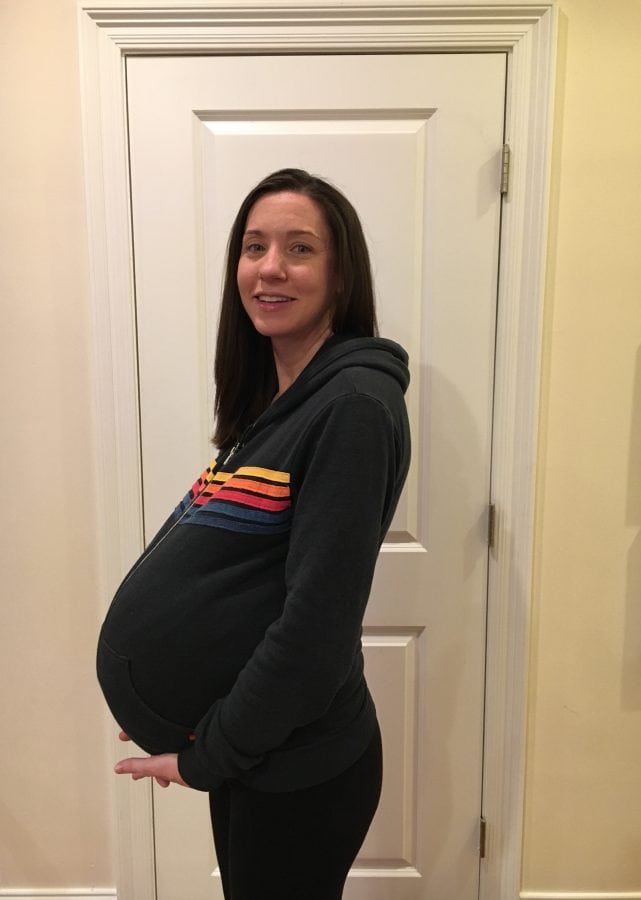 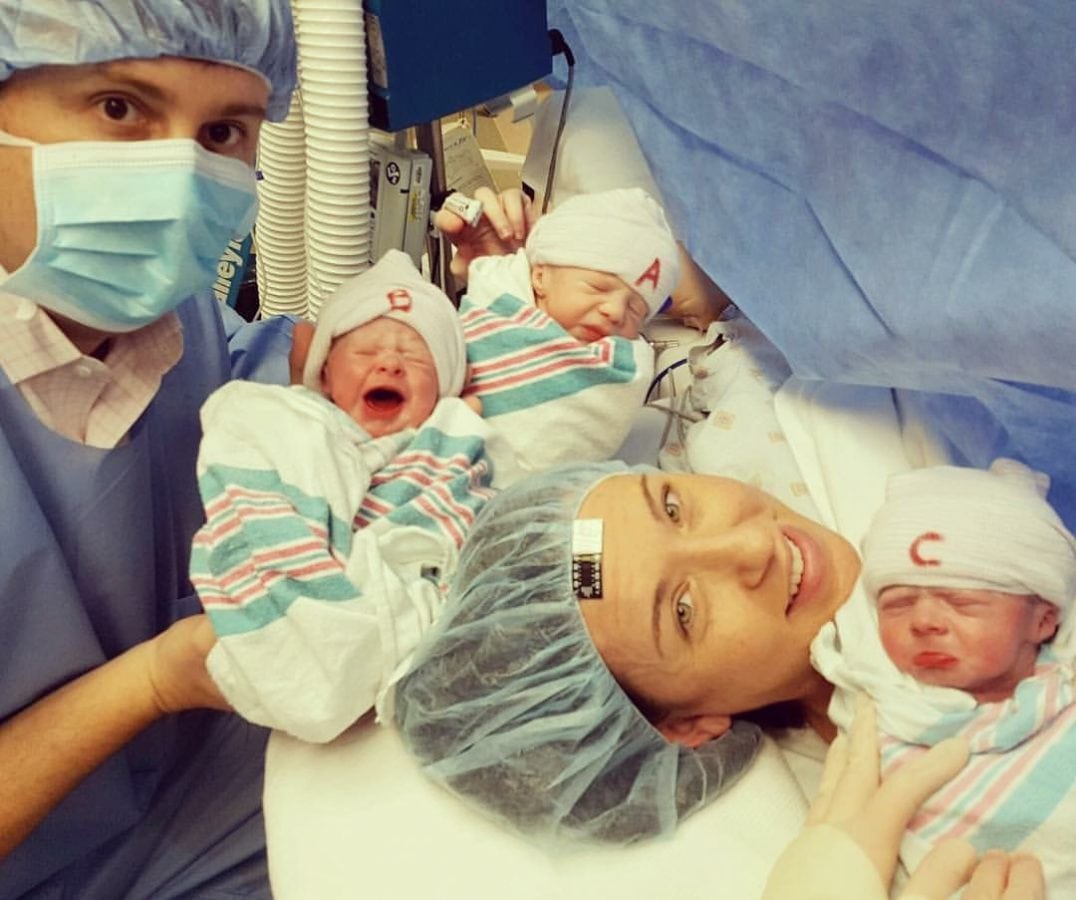 Courtney had a single embryo implanted and was stunned when an ultrasound revealed she was expecting triplets again.

Around one in 9,000 pregnancies results in triplets, but the chance of an embryo splitting and resulting in a multiple birth increases with fertility treatment.

When this happens the siblings are identical as they have all come from the same egg.

But remarkably, in Courtney’s case they are not – meaning she must have fallen pregnant naturally around the same time as conceiving via IVF.

According to the couple’s fertility doctor Sissy Sartor, the chance of that happening combined with giving birth to two sets of triplets is “extremely rare”. 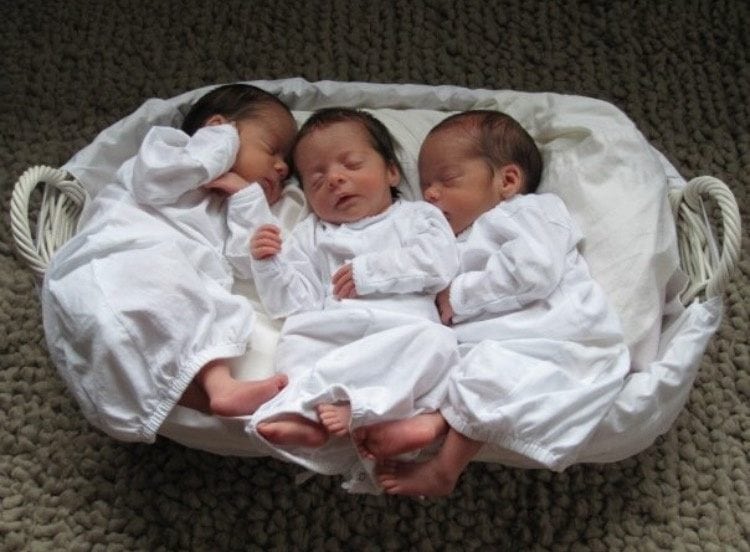 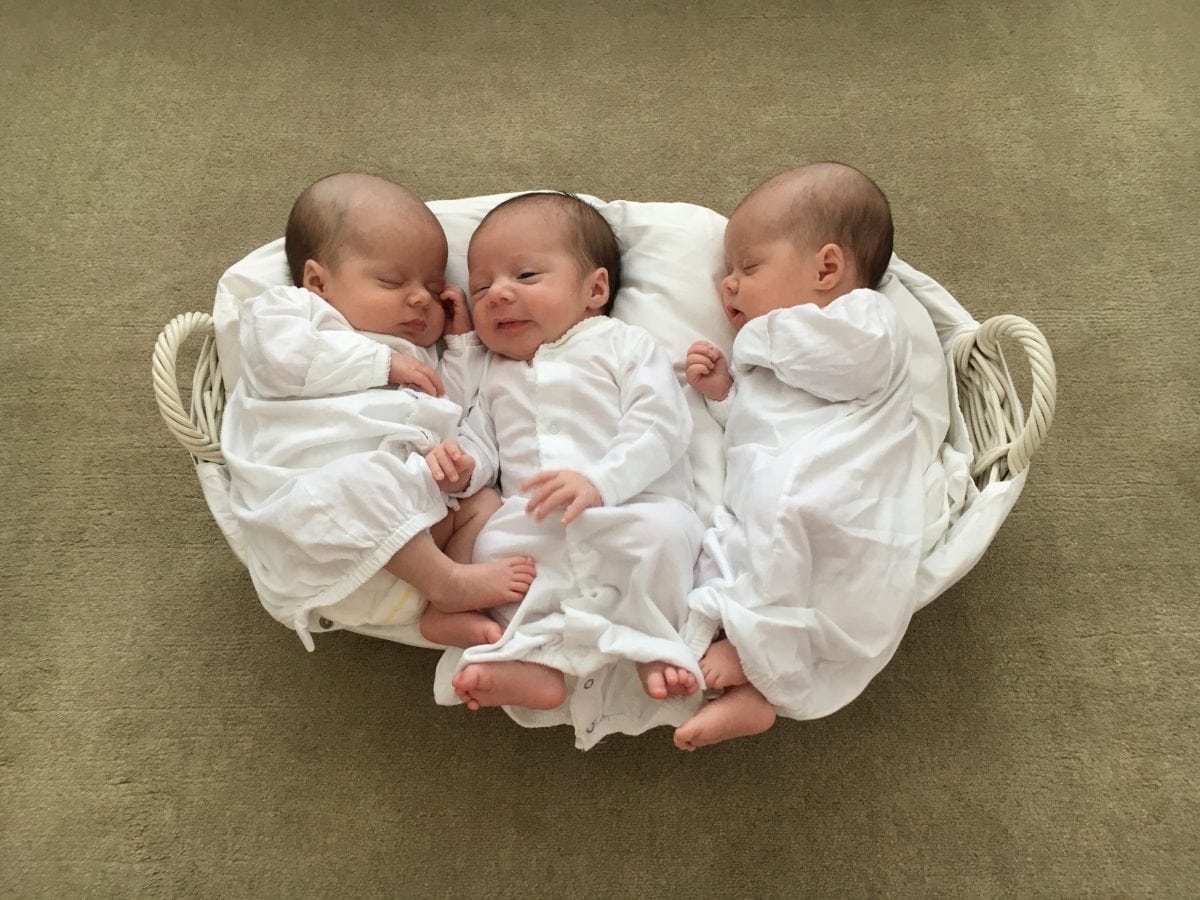 Overjoyed mom-of-six Courtney, of New Orleans, Louisiana said: “It just makes my heart swell to see all these beautiful babies and think they are mine.

“There are a few people in the world with two sets of triplets but certainly not any that happened in these sort of circumstances.

“I never ever thought we would be in this situation.

“Going through IVF was very emotionally draining and we started to feel like, ‘Is this ever going to work? Are we ever going to get the chance to be parents?’

“When we found out we were having the first set we were ecstatic. We were just like, ‘How did this happen?’

“With the second pregnancy, I was already showing a bit by the first ultrasound but I had no idea there were three babies in there.

“The ultrasound came up and we could see there were two circles, so I was like, ‘Wait a minute.’

“As I came to terms with it my husband kept saying, ‘Watch one of them split.’ I said, ‘You are crazy, that won’t happen again,’ but sure enough, it did.

“We were really shocked and in disbelief, but any anxiety was overshadowed by the pure excitement.

“The doctors had never seen anything like it before and when I told my family and friends they were like, ‘No way.'” 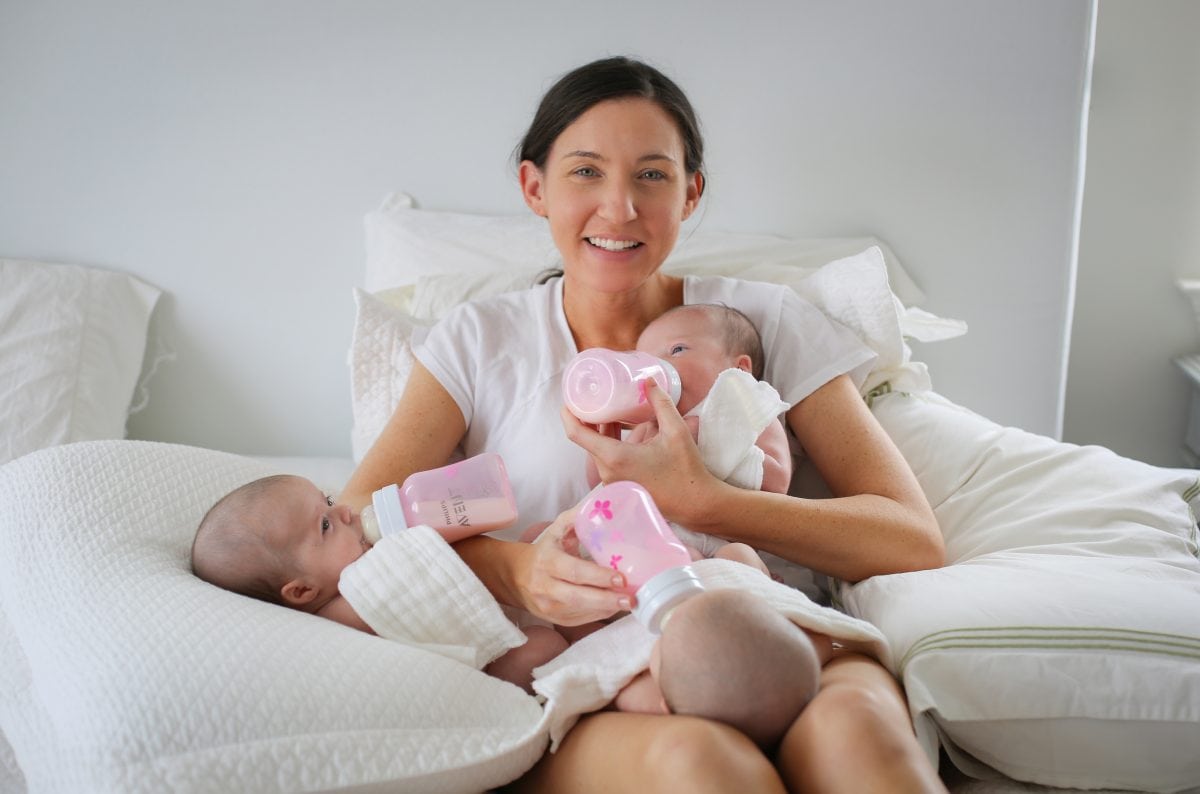 Amusing footage shows the couple breaking the news to their eldest three, who were at first disappointed that they would be welcoming three babies rather than a puppy.

But since the girls – Vivienne and Wells and their fraternal sister Georgie – were born in February 2017, Courtney says their older siblings have “fallen in love”.

“It has been really cool to see how wonderfully the older triplets have adapted to having their three new sisters,” Courtney, a chief financial officer, added.

“We assigned each older sibling a younger sibling based on birth order which has helped them bond and they have fallen in love with them.”

Courtney and Philip decided to try in vitro fertilization – IVF – after Polycystic Ovarian Syndrome prevented Courtney from ovulating regularly and left her unable to conceive.

The procedure sees the woman’s egg fertilized outside the body and implanted back into the womb. 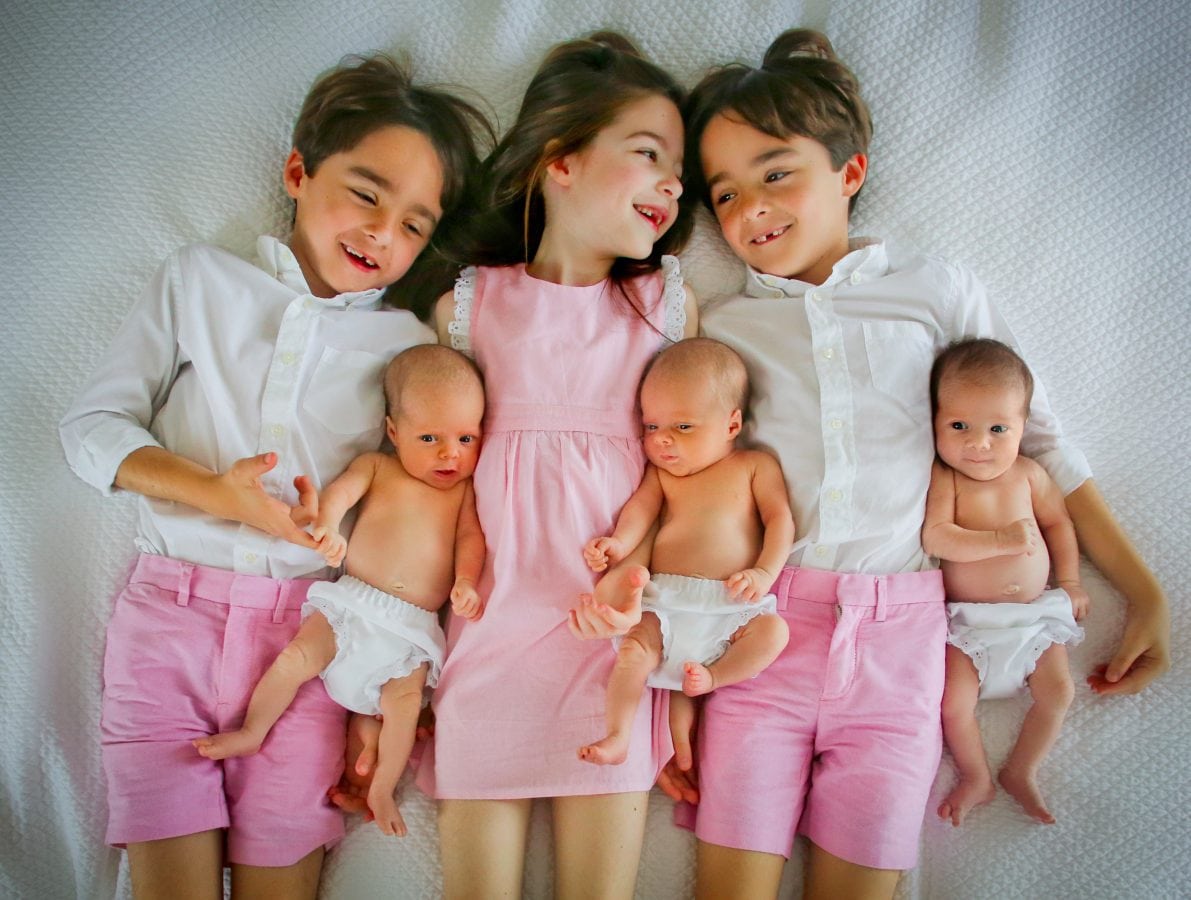 The couple’s fertility doctor Sissy Sartor, of The Fertility Institute, said she has never seen a case like the Garrett’s.

“The second set of triplets occurred with a transfer in 2016 of a single embryo. It turns out she conceived not only with the transferred embryo but also from an ovulated egg.

“Whether or not in that second conception of triplets the splitting of the embryo occurred with the embryo resulting from the ovulated egg or from the transferred IVF embryo, the calculated incidence of two sets of triplets happening would be any where from .5 to 2 times per million cases.

“During my career, I have had a handful of identical twins after fertility treatment, but to have two splitting events with embryo transfer with the same patient, I have not experienced that before.

“It was a pleasure taking care of the Garretts and I understand that they are managing all their bounty beautifully.” 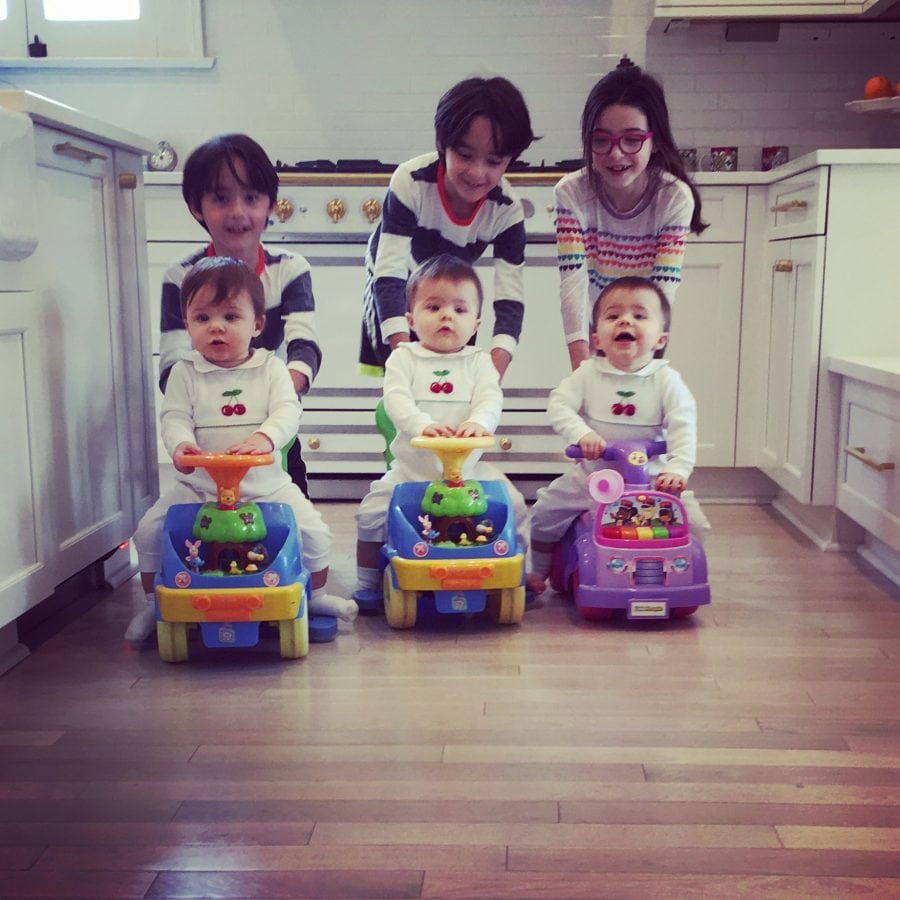 Philip said he is “ecstatic” and added: “It is amazing having a house that is full of life.

“There is never a dull moment. There is always lots going on and we really enjoy each other.” 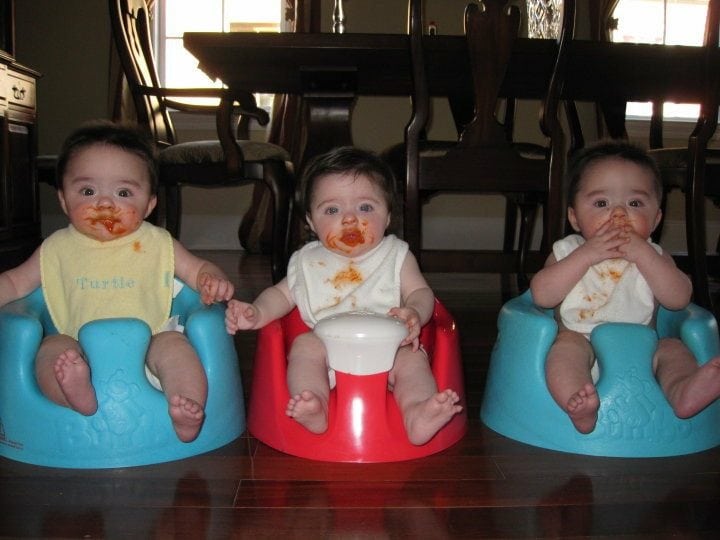 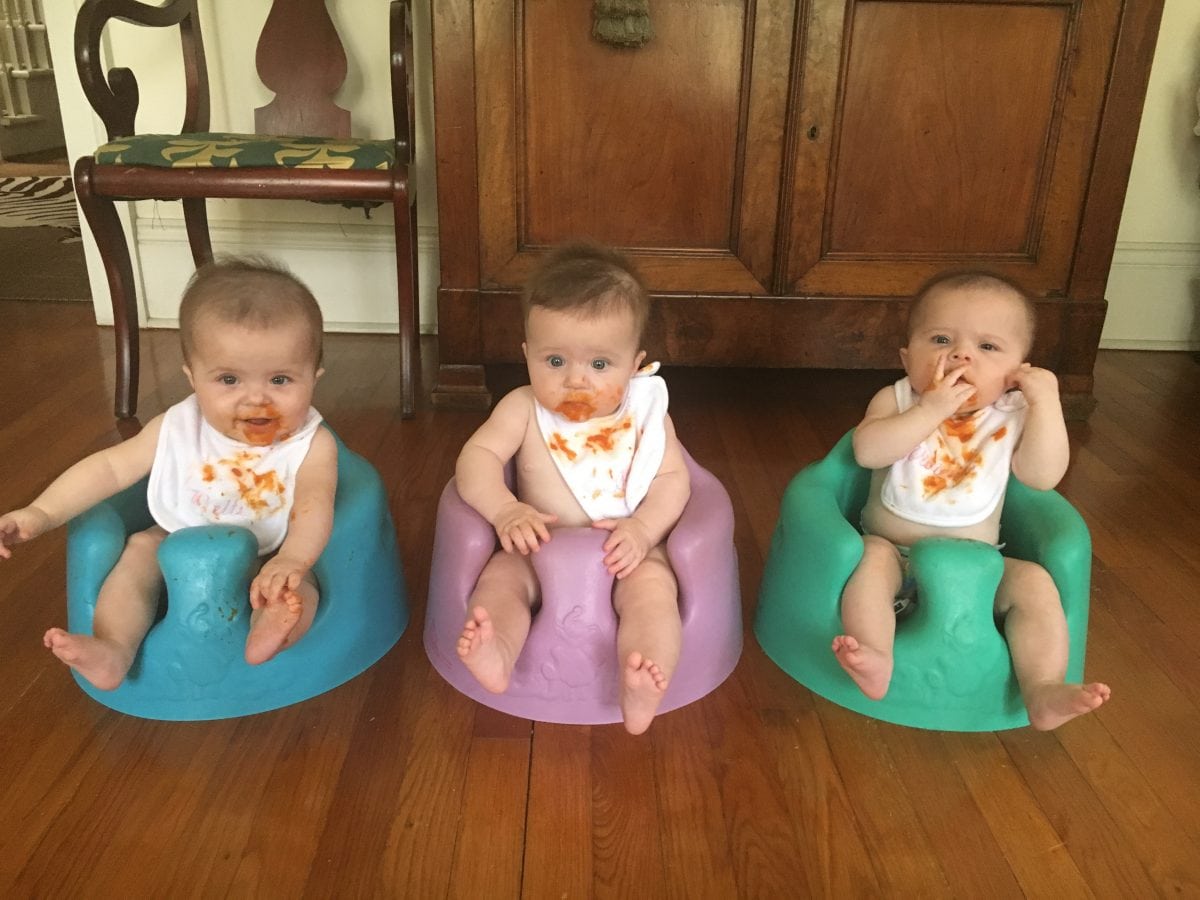