A private security van loaded with more than £400,000 in cash burned to the ground after an electrical fault. Hundreds of people had to be evacuated from nearby buildings as the G4S vehicle burst into flames and rolled down a sloping street. Thick black smoke billowed from the van, spreading through nearby flats and […]

A private security van loaded with more than £400,000 in cash burned to the ground after an electrical fault.

Hundreds of people had to be evacuated from nearby buildings as the G4S vehicle burst into flames and rolled down a sloping street.

Thick black smoke billowed from the van, spreading through nearby flats and forcing people out on to the streets.

Frances Avent was giving a piano lesson when the blaze took hold outside a popular Wetherspoons pub in Colchester, Essex, on Friday afternoon.

She said: “I was teaching when I smelled the smoke. It was a kind of electrical smell.

“When I looked outside everything was black and this van was on fire.

“I wasn’t sure whether it could catch on to the side of the building as it was very close.

“It was much less scary for me than the people in the pub and outside, I am sure.

“There were a few smaller explosions.

“The emergency services were there very quickly and I was evacuated.

“Everyone was crowding the streets trying to have a look and find out what was going on.

David Matthews, from Colchester, Essex, was stepping off a bus with his partner when he witnessed the fire.

He said: “We got off the bus and saw the smoke.

There was lots of it, it was filling the street.

“We then heard a booming bang as the van exploded.

“The police told us to move out of the way so we walked up the road.”

Another witness praised the pub staff for their quick-thinking.

She said: “It was pretty scary to see it go up so quickly.

“The staff were outstanding, they deserve praise.

“There was such a strong smell of smoke. The alarm went off and everyone was out within minutes.”

The fire was put out 15 minutes after firefighters were called to the scene at 2.15pm on Friday.

One officer said: “Fire crews were called to reports of a vehicle fire in Colchester.

“Firefighters were able to extinguish the fire by 2.30pm. 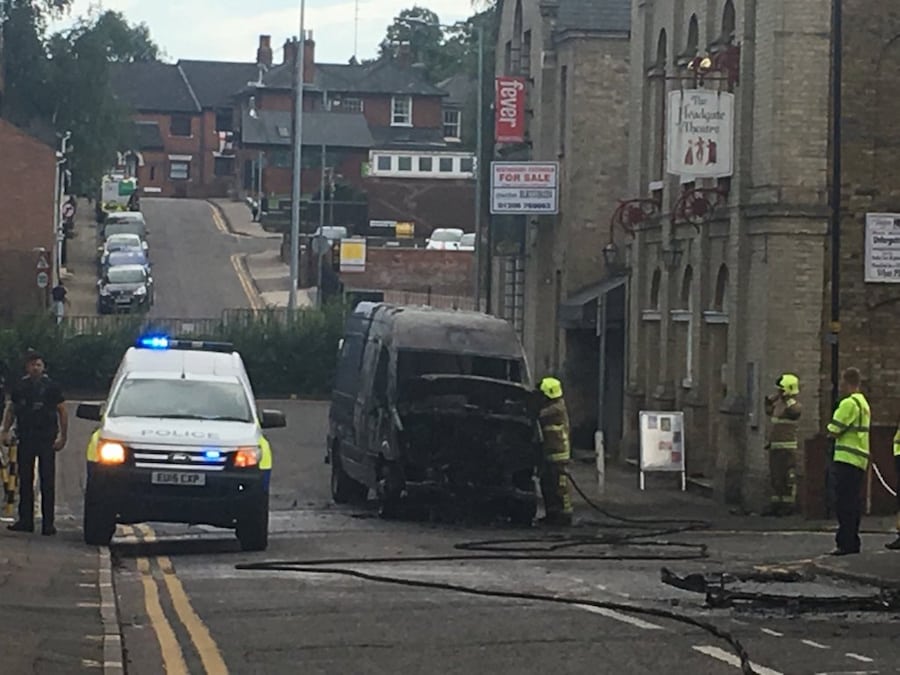 “Fire crews then used a fan to clear the smoke from the affected flat.

“The kitchen has been left with some smoke damage, but the rest of the flat was unaffected.

“The fire was caused by an engine fault on the van.”

The Playhouse pub, in St John’s Street, was closed to customers after the alarm was raised.

It remained shut for business throughout the afternoon as the damage was assessed.

A spokesman for JD Wetherspoon said: “The fire happened right outside the pub and smoke came into the pub.

“The pub was evacuated at around 2.15pm.

“Fire inspectors are in the pub checking it out.

“We hope to be open again as soon as possible, but don’t know what time at this stage.”