Britain’s oldest teacher who has taught at least 3,500 pupils is still going strong in the classroom – at the grand old age of 89. Dedicated Irene Basham has been teaching children for almost 70 years – getting her first primary class in 1947. The sprightly pensioner began teaching at just 20 and continued at […] 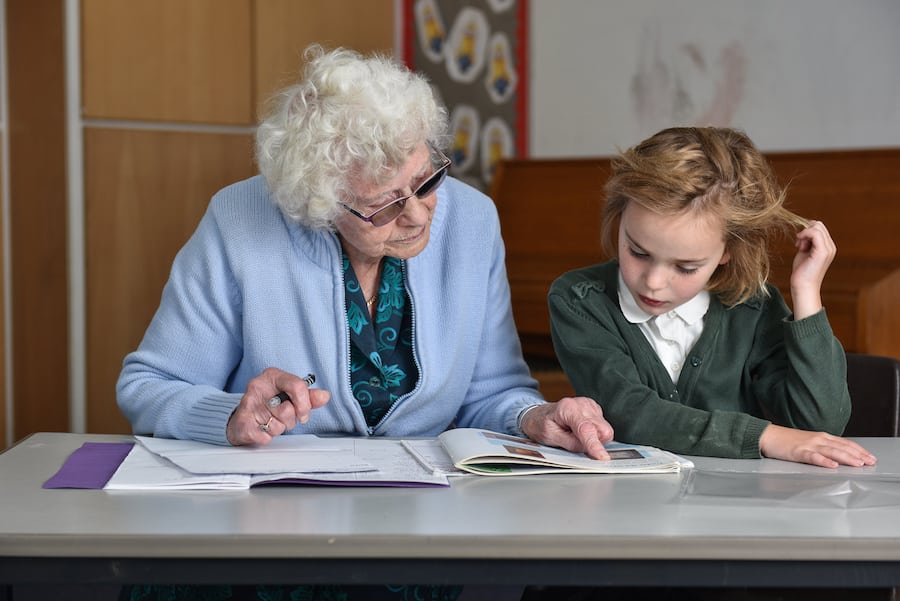 Britain’s oldest teacher who has taught at least 3,500 pupils is still going strong in the classroom – at the grand old age of 89.

Dedicated Irene Basham has been teaching children for almost 70 years – getting her first primary class in 1947.

The sprightly pensioner began teaching at just 20 and continued at the same primary school as a deputy then headteacher of its infant school until her retirement in 1992.

She found herself being recruited once again by her grandson’s headteacher just a few months later as a teaching assistant.

Irene now still does one day a week in the school – helping out kids with the three RRRs.

She said: “I was at my grandson’s Christmas play and was telling the headteacher how much I missed the children.

“She offered me the chance to go in and help out and I have been there ever since.

“I have always loved teaching children and I love to be with them.

“They talk to you and if you sit and listen to them while they are reading they tell you little bits – like whether they are worried or frightened by anything.

“Because I’m older they feel they can tell me more. I think they think I was about when dinosaurs were walking around.”

The octogenarian volunteers one day a week at Pool Church Of England Primary School in Leeds, West Yorks., and – despite turning 90 at the end of this month – the grandmother-of-three is as keen as when she first started.

Irene, who reads one-to-one with a class of 30 children aged between five-seven, said: “I don’t think reading and writing are valued by the education system as much as they used to be.

“The kids get really excited by learning about the world and language and I love to see that.

“I think they try and teach children too much too soon now – they don’t give them any time to assimilate information.

“Learning seemed more fun when I started out but I think kids are stressed now.”

Irene graduated with her teaching certificate from Furzdown Teaching College in London just as the Second World War ended in 1945.

She married her late husband John two years later and gave birth to their daughter Susan in 1964, taking a five-year break from teaching to spend time with her.

Irene admits that she is not quite as light on her feet now and gets a lift to her weekly classes from her daughter, Susan, aged 53.

However she does her best to stay fit and active by doing crosswords with her brother-in-law, Keith, walking, gardening and watching the news.

She said: “I walk about a lot and have no real ailments and I keep myself mentally alert.

“There is no great secret to it – I have never been a big drinker apart from a few sherries with the family and I eat lots of fruit and vegetables.

“My family don’t think it’s surprising at all that I still teach – it’s what I have always done.

“The other teachers love it when I come in because the next day is Friday – they call me the ‘Thursday lady’.”

However, her 70 years of service have not passed without a few remarkable moments.

The mother-of-one was subject to a joke by colleagues in the 1980s when they wrote-in to Estha Rantzen’s “That’s Life”, telling the sharp-tongued presenter how they had a colleague known as “I Basham”.

Irene’s retirement in 1992 was marked by a week-long party at Leeds’ Farfield Primary School during which she was treated to a helicopter ride around north west Leeds.

And though the life-long teacher admits her youth may be behind her she has no plans to give up teaching anytime soon.

Her family is planning a huge party for her this month with invites going out to the many former pupils and colleagues in her address book.

She said: “I see a lot of the old pupils out and about with their children in the neighborhood.

“It’s so lovely to see them fully-grown – it doesn’t make me feel old at all.”