Police are investigating after thoughtless thugs splattered an ambulance car with flour and eggs as paramedics attended a late-night call-out.

The rapid response vehicle was left out of action after the windscreen was completely covered during the “senseless act”.

It resulted in the emergency vehicle being unable to respond to incidents for an extended time while it was being cleaned.

Paramedics tweeted about what happened to say: “Whilst attending a 999 call in #Peterborough this week, our @EastEnglandAmb response vehicle had eggs and flower thrown over it.

“This senseless act resulted in an emergency vehicle being unable to respond for an extended time whilst being cleaned.”

Police are now investigating the incident, which happened in Peterborough, Cambs., at around 9pm on August 29.

A spokesperson for the East of England Ambulance Service said: “It’s hard to understand why anyone would vandalise other people’s property, but when it happens to an ambulance vehicle while the crew is giving urgent medical assistance, it’s beyond belief. 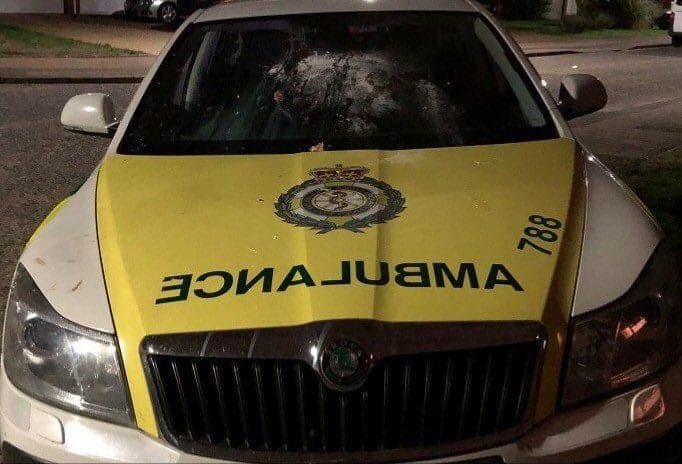 “Rapid response vehicles are used to get to urgent calls quickly – they help save lives. Taking one off the road because of vandalism can therefore put lives at risk needlessly.

“If you know anything about this incident please contact Cambridgeshire police on 101.”

The incident comes only a month after a vulnerable woman was pelted by flour and eggs while sitting on a park bench in Bury St Edmunds, Suffolk.

Two 15-year-old boys, a 16-year-old boy and two 17-year-old boys remain on police bail over the assault, while a sixth boy remains under investigation.